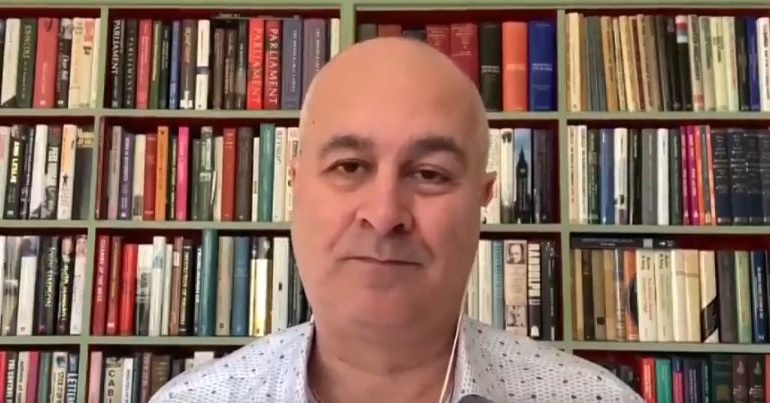 Boris Johnson stands accused of ‘wanting a culture war’ over his comments about the statue of Winston Churchill. Right-wing pundit Iain Dale appeared on Sky News on 15 June and tried to defend the PM on the controversy. Instead, he ended up dropping Johnson further in the shit.

His ‘defence’ also spoke volumes about why the UK is in the ghastly state it’s in right now.

Johnson wrote an opinion piece in the Telegraph on 14 June. In it, he criticised the “far-Right thugs” who jack-booted their way around London this weekend to cause racist mayhem. As the Guardian pointed out, he also mentioned “in passing” a commission to investigate racial inequalities. But he “mainly devoted” the piece to “a repetition of his opposition to removing statues of controversial historical figures”, in particular the statue of Churchill in Parliament Square.

In response, shadow justice secretary David Lammy accused Johnson of provoking a culture war. He asserted that the Conservatives “want a culture war because they want to distract from the issues”:

Sky News‘s Adam Boulton raised this during the conversation with Dale. The LBC presenter exclaimed “oh for god’s sake” as soon as the Sky News host raised it.

After being asked whether Johnson was “just pandering to his base”, Dale said:

when you ask questions like ‘is he stoking a culture war’, I think you need to actually watch your language as well, because nobody should be looking at stoking culture wars. …

Boulton then pointed out that Dominic Cummings, Johnson’s chief adviser, has “written about this as a possible tactic in the past”. That left Dale floundering, jabbering on about how Cummings is “not the prime minister” and Johnson is his “own man”. He then posited:

What you’re suggesting, even by asking that question, is that we are going down the same route as the United States, where there clearly is a developing culture war led by president Trump. …

In the discussion, Dale didn’t succeed in providing much of a defence for Johnson. His baseless repetition of the phrase ‘nobody wants a culture war’ opened the door for Boulton to point out that, on the contrary, the PM’s closest adviser has openly mused about culture wars as a ‘tactic’ in the past.

His indignation at the idea there was any comparison between the US and the UK was also telling. Johnson, like Donald Trump, is known for his racist and prejudiced statements. Johnson, like Trump, has received endorsements from far-right figures. Trump himself even makes comparisons between himself and Johnson. The parallels are explicit. So Dale’s behaving like someone who’s looking at an inferno and swearing he can’t even smell smoke.

Most indicative, however, was Dale’s horror that Boulton would even speak of a culture war, or raise a question that might lead to comparisons between Trump and Johnson. In his proposed preface to Animal Farm, George Orwell wrote:

Unpopular ideas can be silenced, and inconvenient facts kept dark, without the need for any official ban. ..

At any given moment there is an orthodoxy, a body of ideas which it is assumed that all right-thinking people will accept without question. It is not exactly forbidden to say this, that or the other, but it is ‘not done’ to say it…

Anyone who challenges the prevailing orthodoxy finds himself silenced with surprising effectiveness.

Orwell was referring to the British media of his time. But not much has changed since then. Because this is exactly what was going on in this discussion. Boulton said the unsayable. In Britain, although a culture war may be happening, it’s ‘not done’ to say so. It’s ‘not done’ to talk about why. We won’t even teach it in schools.

Without acknowledging you have a problem, you’re never going to tackle it. Britain’s long-standing ‘not done’ culture exists to ensure that remains the case and that nothing ever changes. Which is why, of course, we have to scream it from the rooftops.