As far-right fascists rampage through London, the establishment's emboldening them further - The Canary 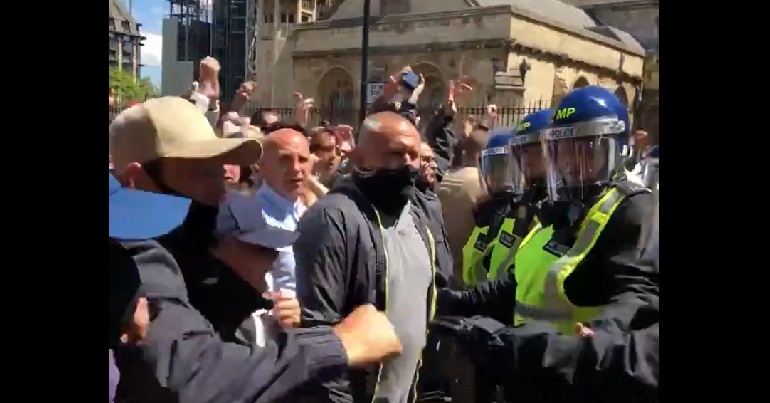 On 13 June, hoards of angry far-right protesters stormed through central London, allegedly to protect statues and monuments from Black Lives Matter (BLM) activists. The marches quickly descended into disorder, with video footage emerging of white men behaving violently, and kicking and throwing punches at the police. Journalists were also reportedly attacked. But the response from police and the establishment to their violence has likely emboldened them even further.

‘A two-tier system based on race’

Large crowds of white men were recorded marching, swearing, and making Nazi salutes. Video footage showed violent scuffles between a group of white men and the police in Parliament Square.

Yet reports emerged of Met Police “indiscriminately” arresting Black men in the evening on 13 June:

hearing met are indiscriminately arresting groups of young black men in central ldn this eve – reports of up to 50. there have been 100 arrests in total reported today so far. the disparity and the size and violence of the FLA v BLM demos was huge, so 50% BLM arrests is… 👀👀

The cops are mopping up groups of young black people in the vicinity of Trafalgar Square, Leciester Square and Hyde Park. Had between 30-40 detained, searched and arrested in the last 1.5-2 hours

We have of course known for a while that the standards of policing and justice that apply to People of Colour don’t apply to white people. As academic Tarek Younis commented:

Remember everyone, the Counter-Terrorism Act 2019 says those who RECKLESSLY supports a terror org. can face up to 15 years in prison, so expect every single one of these "protestors" (all of them) in prison soon. Britain def does not have a 2-tier justice system based on race… https://t.co/iZjO1E8VnA

Footballer Gary Lineker similarly pointed out the double standard in how Saturday’s protests were being dealt with:

The police have reported around 100 arrests yesterday at what was self-evidently a white supremacist riot, but that number may rise.

Early indications from groups providing legal support have also, however, documented between 30-40 mainly young black people, including bystanders, swept up in a wave of arrests in the early evening. They were taken to police stations across London and released in the middle of the night.

While Met Police’s statement mentions “more than 100” arrests, there’s no breakdown of how many of these were Black people. And given the thousands of far-right supporters who turned up to protest in London, if 30-40 of the arrests made were of Black people, this figure appears to be disproportionately high.

A space for fascism

Perhaps more disturbing than the marches themselves is the legitimacy that they’ve been given by the press and certain influential bodies. Apart from the far-right being benignly referred to as ‘counter-protesters’, the Metro initially called them “anti-antifascists”. It later changed this to “far right protesters”.

If only there were a shorter, less cumbersome word for "anti-antifascist." 🤔 pic.twitter.com/3rfGA0YmvP

Are we actually calling these people 'anti-anti-racism protestors' when the word racists exists?

Yesterday’s protests were not ‘hijacked’ by violent elements as people keep suggesting. They were organised by far-right racist groups who came to London with the explicit intent to cause violence – and a failure to describe it as such is a moral failure.

Moreover, a journalist at the Telegraph decided to video record and amplify a speech from Britain First leader Paul Golding. This is the same man who was found guilty under Schedule 7 of the Terrorism Act on 20 May. Yet he’s seen speaking freely in public without any police in sight.

And in a statement released on 13 June, Met Police claimed to “understand why people want to express their concerns”, again implicitly legitimising fascist agendas.

Meanwhile, despite Nazi salutes and the far-right presence, opposition leader Keir Starmer couldn’t bring himself to describe the ‘counter-protesters’ as fascist or racist:

It’s really saying something that Starmer couldn’t bring himself to call these groups racist, when even Boris Johnson, with his well-established record of racism, managed to do so. What’s worse, the arrests, which we’re seeing disproportionately affect Black people in real-time, are going to be fast-tracked by the government with support from Starmer.

Someone really ought to tell him that tweeting #BlackLivesMatter and ‘taking the knee’ counts for very little when he can neither effectively address the anti-Blackness in his own party, nor oppose a policy such as fast-tracking of arrests which could disproportionately harm Black people.

If not now, when?

Despite the official BLM protest being called off in Hyde Park, BLM demos still took place in parts of central London. The movement has brought to the forefront the prevalence of racist and fascist views in Britain. The scale of the fascist far-right protests, combined with the behaviour of the police, only serves to reinforce why the Black Lives Matter movement is more important than ever.