Three years on, the Grenfell inquiry continues. Yet core evidence is there for all to see. - Canary 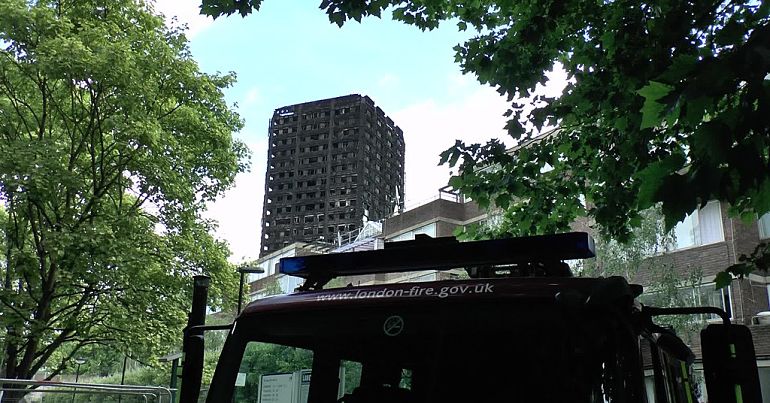 The inquiry into the Grenfell fire disaster was halted earlier in the year after legal clarity was sought as to whether statements made by individuals or corporate entities could be used in any subsequent criminal cases. The Coronavirus (Covid-19) outbreak delayed matters further.

Despite these delays, much of the original evidence exposed by media, including The Canary, is still available for all to see.

In January, lawyers acting for many of the companies involved asked inquiry chairman Martin Moore-Bick to write to the attorney general to seek an undertaking that testimony given would not be used in any future criminal proceedings. However, should no such undertaking be agreed, then those companies would refuse to answer questions at the inquiry.

The corporate manslaughter legislation in the UK is already weak enough, without giving companies, who could have been culpable in the deaths of 72 innocent people, immunity from prosecution.

In a letter of 28 May, attorney general Suella Braverman ruled that oral evidence given to the inquiry would not be used against “natural or legal persons” (individuals or corporations) in any criminal proceedings. That is, except where someone is found to have provided false evidence or having conspired with others to do so.

In an accompanying fact sheet, the ruling also explains that:

legal persons cannot refuse to answer questions on the basis that to do so would risk self-incrimination, which is a right granted to them in law. It also means that their answers cannot be used in evidence in any future prosecution against them.

However, the ruling does not provide immunity from prosecution to any person whatsoever. It’s important to note the fact sheet also explains that ‘legal persons’ means corporate entities. Examples given include “limited liability partnership or an incorporated company”.

In other words, testimony given by individuals (natural persons) or corporate identities (legal persons) cannot be used against them should criminal proceedings follow. While that ruling means witnesses will likely speak more freely at the inquiry, they are also less likely to face prosecution.

The request by companies for a ruling by the attorney general came after emails disclosed to the inquiry indicated that those same companies knew two years before the fire that the cladding used on the tower block would fail.

So why have no admissions been made to their own failures? Perhaps there is no real mystery. Imagine the financial consequences … think about the drop in trade, the loss of profit, the insurance implications.

The inquiry already has a wealth of evidence submitted to the inquiry, much from victims and families of victims of the fire. But given the ruling, more evidence is now expected from corporate entities.

The key players involved in the Grenfell Tower refurbishment project were:

What was already known

There is also evidence regarding the supply of materials for the refurbishment project and services in the public domain, such as that published by The Canary.

That initial investigation showed how in Arconic’s Reynobond PE brochure (now deleted) a diagram indicated that panels with a fire retardant core, which applies only to the Reynobond FR model, should be used for buildings up to 30 metres tall. And above that, the A2 (non-combustible) model should only be used. This was confirmed by Reuters.

Where the building exceeds 18m in height, the BCA recommends…the use of materials of limited combustibility for all elements of the cladding system both above and below 18m.

These were quoted on the Omnis Exteriors website (page since deleted). However, Grenfell Tower was over 60 metres tall and only Reynobond PE (the combustible variety) was installed.

Then there is the matter of cost-cutting. The original submission by Studio E for the Grenfell refurbishment quoted a zinc-based, non-combustible cladding. However, KCTMO asked Artelia to come up with cheaper figures on a range of items, including cladding.

And, as can be seen, by opting for the combustible cladding, just under £300,000 was saved:

While the zinc panels would have been non-combustible, the aluminium eventually used had a flammable polyethylene core.

Omnis director John Cowley is also the managing director of CEP Architectural Facades, which produced rainscreen panels and windows for Grenfell Tower. He’s clear where some blame may lie:

Reynobond PE is not banned in the UK. Current building regulations allow its use in both low-rise and high-rise structures.

The key question now is whether the overall design of the building’s complete exterior was properly tested and subsequently signed off by the relevant authorities including the fire officer, building compliance officer and architect before commencement of the project.

The Department for Communities and Local Government clarified its view:

Cladding using a composite aluminium panel with a polythene core should not be used for cladding on a building taller than 18 metres.

With regard to building regulations, according to Designing Buildings wiki:

The potential for a fire in a multi-storey building to break out through the facade and then to rapidly spread across external cladding is addressed in approved document B. This states that ‘The external envelope of a building should not provide a medium for fire spread if it is likely to be a risk to health and safety. The use of combustible materials in the cladding system and extensive cavities may present such a risk in tall buildings.

Other, more recent evidence, has been reported by The Canary, including how some of the private companies involved in the refurbishment are still making huge profits. Also, a fire at Lakanal House killed six people in 2009. The Canary reported how previous government ministers agreed to review the safety measures, but it was all talk and no action.

When the truth comes out about this tragedy, we may find there is blood on the hands of a number of organisations.

72 people died as a result of the fire at Grenfell, many more were injured a community is still grieving. Some former residents are still waiting to be properly rehoused and hundreds of tower blocks around the country are still to have their cladding removed. No company or individual who played a part in contributing to this tragedy should be allowed to avoid blame.

Phase two of the inquiry is set to recommence 6 July 2020.