While the UK’s ‘deportation machine’ keeps ticking over during coronavirus restrictions, there is a way to stop it - The Canary 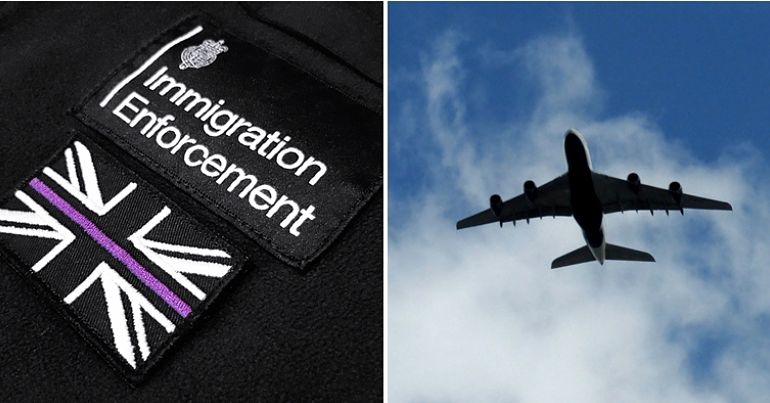 A new report published by Corporate Watch reveals there’s collaboration between the private sector and the Home Office to create a kind of “deportation machine”. And despite coronavirus (Covid-19) restrictions, this “motor is still ticking over”. But as restrictions mean “the Home Office’s deportation machine has slowed”, now could be the time “to push for a more radical shift” in this inhumane practice.

On 7 May, the Guardian reported a chartered deportation flight took off to Poland on 30 April. This was despite government instructions restricting non-essential flights. The Corporate Watch report states the majority of deportations now take place on regularly scheduled flights among holiday and business travellers. The deportees are handcuffed to private security guards, provided by the company Mitie, during the flight.

According to campaigners and media reports, the Home Office uses a number of airline companies for deportation flights, although British Airways “is top of the list”. The Canary contacted British Airways for comment. Its spokesperson said:

It is a legal requirement (Immigration Act 1971) for all UK airlines to deport people when asked to do so by the Home Office. Not fulfilling this obligation amounts to breaking the law.

Airlines only have the right to refuse deportees on the basis that they feel there is a threat to the safety or security of the aircraft / its passengers or the individual.

We are not given any personal information about the individual being deported, including their sexuality, or why they are being deported. The process we follow is a full risk assessment, with the Home Office, which considers the safety of the individual, our customers and crew on the flight.​

Additionally, the Home Office uses Kenya Airways, Easyjet, Qatar Airways, Turkish Airlines, Ethiopian Airlines, Air France, Royal Jordanian. In June 2018, Virgin Airlines claimed to have stopped this practice. But then a report by the Independent showed Virgin agreed to deport a man to Nigeria after claiming it had stopped.

Who’s targeted and how

Corporate Watch uses the term “deportations” to refer to cases where the Home Office uses direct force to remove someone from the UK. However, the Home Office refers to these as “enforced returns”.

The Home Office also has what it describes as “voluntary returns”, where it doesn’t use any direct force. However, the term “voluntary” is somewhat subjective. Because there’s also a certain amount of threat involved in this kind of deportation. People may decide to leave the UK ‘voluntarily’ purely in order to avoid forceful deportation.

Corporate Watch reveals enforced deportations can begin with an arrest at an Immigration Reporting Centre where officials could simply “grab people”. Whilst awaiting details of deportation from the UK, some people have to sign in at these reporting centres. Additionally, Home Office officials could arrest deportees during a raid on their workplace or from “dawn raids” on their homes. Immigration officers and reporting centre caseworkers “are issued targets and incentives to gather deportees”, according to Corporate Watch.

British Airways says it’s legally obliged under the Immigration Act 1971 to deport people if the Home Office asks it to. The exception being “a threat to the safety or security of the aircraft / its passengers or the individual”. However, research conducted by Lesbians and Gays support the migrants, also found an airline could refuse to deport people based on a “reasonable excuse”. And in fact, some airline captains have done so without a prosecution following such action.

The Canary contacted the Home Office for comment. A spokesperson highlighted information on its website which states:

Immigration Enforcement is responding to the unique circumstances of the coronavirus outbreak and following the latest guidance from Public Health England.

During this time, the health and safety of our staff, and all those within the immigration system, is more important than ever.

On 26 March the High Court ruled that our approach to detention and coronavirus was sensible, with the appropriate precautionary measures in place.

The public expects that we maintain law and order and keep them safe from high-harm individuals, which is why the vast majority of those currently in detention are foreign national offenders.

The Canary contacted the Labour Party for comment, but it had not responded by the time of publication.

Another aspect to the inhumanity of deportations in the UK is the profit private enterprises earn from it. As reported by The Canary, private transport company National Express and its executives earned millions of pounds in 2018 as coach companies it owns were involved in deportations. Additionally, private contractors earn millions of pounds from the Home Office to run immigration removal centres.

And it’s not just confined to the UK. Since Donald Trump came to power in the US, immigration enforcement has increased profit margins for private sector companies that do contract work with the Department of Homeland Security.

We can literally “stand up” against it

But bleak as the Corporate Watch investigation may read, it does present some hope. Because it shows how deportations could be stopped if people take direct action. In a situation where the deportee is already on the plane, passengers could refuse to take their seats. The infographic below demonstrates this:

And there are more options. People could mount legal challenges, campaign publicly or put pressure on their MPs. If the Home Office and airlines continue with this practice, then ordinary people will have to take this stand.