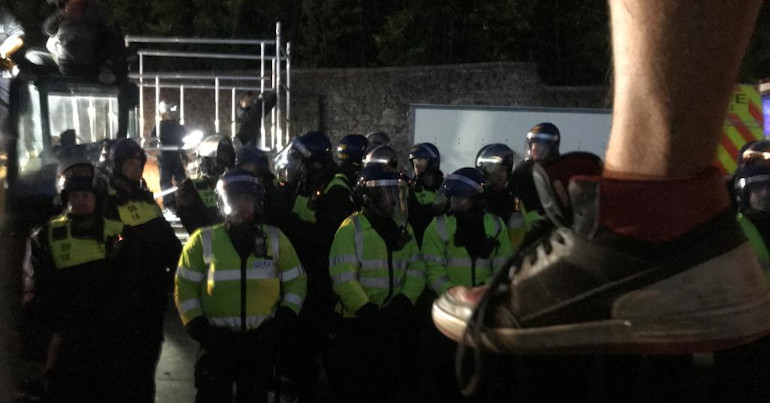 Bailiffs tried to evict people from a travellers site in Glenfrome Road in Bristol on Saturday 13 June. This eviction took place despite ongoing government lockdown measures which restrict the number of people who are legally allowed to gather.

The Canary spoke to Bobby*, a resident of the site, and Dan*, who lives locally.

People pulled from their homes in the early hours

Bobby was woken up early on Saturday as bailiffs arrived. They started pulling people from their caravans and trying to evict them violently. Bobby told The Canary:

When the [bailiffs] came at around 7am my girlfriend was pulled [from her vehicle] by her dreadlocks… and then manhandled, she was wearing only a robe. Another female amongst us was thrown to the floor onto her hip.

Myself, I was restrained for between three and a half and four minutes using excessive force.

Bailiff threatened to ‘kill me’

Bobby told us that the bailiff who restrained him was very angry and aggressive. Bobby was wearing a lanyard around his neck. He told us that a bailiff, who was from a private company called GRC Group, allegedly grabbed the lanyard and twisted it while restraining him:

He told me he would “kill me”. The guy was about 17 stone and I am about 10 stone. I was wearing a lanyard and he twisted it like a garrotte. I have a continuous line an inch wide around my neck where I was wearing the lanyard.

Bobby was then restrained on the ground:

[The bailiff was] pushing into my collarbone at the side of my throat. Fully pinning me to the floor, with another two guys helping him.

Bobby claimed that most of the bailiffs were not recording their actions:

Only one of the bailiffs had a bodycam. None of the actions of any of the other men were recorded.

Those living at the site quickly made a call for support. Many local people quickly arrived. Witnesses told The Canary that around 60-70 people turned out to try to stop the eviction.

Bobby told us that, as the numbers of people increased, the bailiffs called the police for backup. According to onlookers, up to ten police vans were present throughout the day.

Dan arrived at about 8.40 am, after the police had already got there. He told The Canary that he saw bailiffs trying to restrain one resident of the site who was returning home after doing his shopping.

[The residents] weren’t given the option to leave, [the bailiffs] just used the element of surprise and strong arm tactics

Bobby told The Canary that the eviction was unlawful because although squatted, the site had a property on it that was occupied. That meant the owners needed to go to court and obtain a possession order before an eviction could take place.

According to Dan, the bailiffs were claiming that the eviction was justified in common law:

they’re using common law because they can’t get a court date at the moment [because of the lockdown].

People occupy the roof of a caravan

As GRC Group officers were attempting to remove a caravan from the site, people managed to climb onto its roof.

According to Dan, the Glenfrome Road site has a brick wall around it, and the caravan was stopped in the entrance to the site, preventing the bailiffs from continuing with the eviction.

I watched five or six big geezers wrestling a 16 year old girl to the ground, she was approaching the caravan to speak to her sister who was on top of it.

GRC Group had removed the front gate of the site using a JCB vehicle. During the confusion, people were able to get on top of the JCB and move freely between the JCB and the roof of the caravan.

This stopped GRC Group in their tracks. And a stand-off ensued lasting until about 11.30pm.

Dan told us that around 11.30pm a platform was constructed to remove people from the JCB. After that, the bailiffs and police left and the eviction was averted, at least for now.

The Glenfrome Road site remains under threat of eviction, however, as the bailiffs reportedly promised to return soon.

The Canary contacted Avon and Somerset police for a comment about their role in the eviction. They told us:

The primary action was being taken by bailiffs who were carrying out enforcement action on behalf of a private landowner. We were there to prevent a breach of the peace and deal with any criminal offences. Three people were arrested…

We also asked the police about the allegations of assaults by the bailiffs but they declined to comment.

The Canary contacted GRC Group asking for comment on the allegations that its staff assaulted people. We had not received any reply by the time of publication.

An attack against an oppressed group

The dawn raid against the travellers at Glenfrome was part of a systematic pattern of oppression against travelling communities in the UK. As a 2017 report found, Gypsys, Roma and Travellers (GRT) face daily “pervasive prejudice and discrimination”. Many travellers face difficulties accessing basic medical treatment. Meanwhile, tabloid papers perpetuate dangerous racist attacks on GRT groups.

During lockdown the same restrictions should apply to [bailiffs] as other members of the population.

But the police are facilitating those who have resources to oppress minority groups.

*The names in this article are pseudonyms