Far-right leader endorses Boris Johnson but let's face it, we saw it coming - The Canary 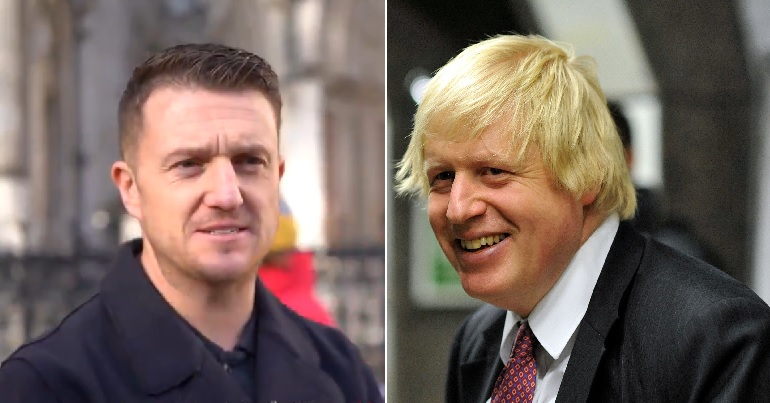 In an interview with RT UK News, far-right leader Stephen Yaxley-Lennon, aka Tommy Robinson, expressed his support for Boris Johnson. The endorsement appears to have become damning proof of the Conservative Party’s far-right appeal. And, so far, Johnson’s failed to reject the endorsement.

However, many are unsurprised by this news, given the anti-Muslim views openly expressed by both Johnson and Yaxley-Lennon:

So what first attracted Tommy Robinson to the Muslim-baiting racist Boris Johnson? pic.twitter.com/m29XIWQWUO

A vote for the far-right

For a lot of people, this endorsement is only further evidence of what they have observed as an increasing shift by the Conservatives towards the far-right:

Tommy Robinson endorsing Boris Johnson today & this endorsement of Rees-Mogg from Britain First's leader shows the Tories are moving from a Centre-Right to a Far-Right party.#ToriesOutNowpic.twitter.com/VOhHWBEBoC

Furthermore, the list of people who have publicly endorsed Johnson so far is, let’s just say, ‘impressive’:

Jeremy Corbyn is endorsed by 129 leading economists, including Nobel Laureates.

Ian Lavery on Boris Johnson’s latest endorsement from the far-right:

“Admired by Donald Trump, aided by Nigel Farage, and endorsed by Tommy Robinson. With friends like these, who needs Boris Johnson?”

Moreover, it seems like it’s becoming harder to deny that a vote for the Conservatives is a vote for far-right values:

Any party with the explicit backing from Tommy Robinson should feel shame beyond belief.

This isn’t Conservatism. This should put wavering moderates beyond any doubt. We must vote elsewhere.pic.twitter.com/jTxFWCHvZi

Johnson has had 8 WEEKS to disavow Tommy Robinson’s support.
He hasn’t.
HE’S FINE WITH IT.

Oh you're voting tory are you? Like Tommy Robinson. You've looked at everything going on in politics and come to the same conclusion about who to vote for as a racist. Bravo buddy.

For some, the choice between far-right endorsed Johnson on the one hand, and Jeremy Corbyn on the other, is an easy one:

Oh deary me, what should concern me more, the imaginary fibre optic communists who want to give me broadband or the actual real life fascists queueing up to endorse out alt-Right-adjacent Prime Minister? Such a conundrum! #VoteLabour https://t.co/iBA4GPIDlQ

This UK election is now down to a fight between Boris Johnson, Vladimir Putin, Tommy Robinson, the oligarchs & Steve Bannon on one side…

..& European social democracy on the other side.

Johnson continues to evade accountability for Islamophobia within his party. This latest endorsement from an Islamophobe such as Yaxley-Lennon should therefore come as no surprise.

However, this endorsement may at least persuade any Muslim voters who were still thinking of voting Conservative in the upcoming election to take a step back and think again. But more than that, will the rest of the UK stand with British Muslims? We’ll only know after 12 December.