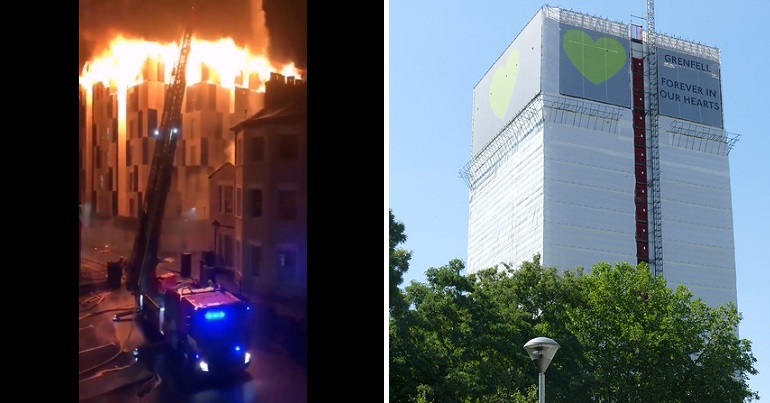 A fire that engulfed a student housing block in Bolton has shocked people up and down the country. While there’s, thankfully, been no recorded loss of life, traumatised students have lost their belongings and their homes. The Fire Brigades Union (FBU) has condemned the incident because two years after the Grenfell tower tragedy, the government has failed to take meaningful action to save lives.

“A shocking indictment of the government’s shameful inaction after Grenfell”

Firefighters have condemned the incident as “a complete failure of the UK’s fire safety system”. In a press release, the FBU said:

It’s deeply troubling to see fire spread rapidly up a building’s exterior again – a shocking indictment of the government’s shameful inaction after Grenfell. This is not how any building should react to a fire in the 21st century, let alone a building in which people live. We need to end the deregulation agenda and the disastrous cuts to our fire and rescue service.

It’s time for a complete overhaul of UK fire safety before it’s too late.

Firefighters on the ground have worked tirelessly to contain the fire and rescue residents. There will clearly be some hard lessons to learn as the circumstances become clearer in the coming days.

Greater Manchester has lost more than 600 firefighters since 2010 alone and, alarmingly, Andy Burnham is trying to cut another six fire engines, including one in Bolton.

We need to stop the senseless cuts to our fire and rescue service before we see another awful incident like this.

Students affected by the fire immediately shared video footage and described their experiences:

This building is literally my home, & ive lost everything. im not trying to get sympathy by tweeting about this again but why isnt it getting the attention it deserved? It's serious. The thought that i wouldve been dead if the smell hadnt woken me up, is traumatising. #boltonfire pic.twitter.com/oJ6MWUXMf8

Lost everything in the #boltonfire lucky that we got out after false alarms constantly for weeks I heard screaming and decided to check it out had to scream at my flat mates it was a real fire if anyone tries to tell me that no-one is at fault and it was safe they're wrong. pic.twitter.com/lNMn991ZTH

my accommodation burnt to pieces tonight, leaving myself & everybody else here homeless & without our possessions. Grateful for all the messages received and hoping everybody is safe. Can’t thank the emergency services enough. #boltonfire 🙏🏼😢 pic.twitter.com/w2xUFzNiO6

Many people shared anger that this fire appears to have been entirely avoidable:

The company which runs this student halls in Bolton was suspended from the national codes in 2016, after our tribunal found they had failed on fire safety: https://t.co/TeYf6x5qJn
pic.twitter.com/Gfdqcybmvb

From 2017 ffs. Now reports that the fire is 'crawling up the cladding' – fire safety policy in this country is a joke, Tories sitting on their hands as always. #BoltonFire pic.twitter.com/K5VQmxBMrA

No lessons learnt from Grenfell

People are shocked by this Conservative government’s inaction with regard to fire safety regulations. After the catastrophic loss of life and displacement caused by the Grenfell Tower fire, avoiding a tragedy like this still isn’t on the government’s agenda:

That’s flammable cladding burning on a block of student flats.

Two years after Grenfell. Two years of warnings about the hundreds of buildings wrapped in flammable cladding.

Tories will say the #BoltonFire shouldn’t be politicised. Fuck them.#Grenfell was political. They chose tax cuts for millionaires over making homes safe.
They watched 72 people die as a result, promised to do better, then kept cutting. And now this! pic.twitter.com/oc52TC02uw

The Conservative government’s disdain for the people who are at risk in buildings across the UK seems clear:

In the two years since #Grenfell, the government has approved funding to make one building safe. ONE.

The #BoltonFire shows we don’t have time to wait. This government is a risk to public safety. https://t.co/mNsIUer8G2

I can't believe this has happened again. All the lies and false promises Tories fed us that Grenfell was a one-off unspeakable tragedy. The government do not give two shits about the people living in this country. #boltonfirepic.twitter.com/mceMNeKXlr

Moreover, mainstream media has been complicit in failing to hold the government to account:

What does it say about our media and society in general that 72 people died because of @arconic cladding and the amount of people who even know the name of the company in this country touches hundreds at most. Corporate invisibility and invincibility is the norm not aberration https://t.co/dh02ABWFno

Truly incredible. Sky News just ran a story on the Bolton fire which did not mention the word cladding.
They showed and read out in full a nothing tweet from Boris Johnson praising the fire services, and completely ignored this tweet from Jeremy Corbyn. https://t.co/LJJRtgKdgw

People are rightly angry at the fact that the Conservative government seems to have unlimited funds for its own agenda, but not for issues that affect ordinary people:

We have spent £66bn on Brexit but can't afford to remove cladding from every vulnerable home in Britain in two fucking years. This government is a disgrace, the press MUST hold them to account. #boltonfire

It’s become painfully clear that not only was the fire in Bolton avoidable, but that the Tories cannot be relied on to ensure a tragedy like this never happens again. It seems obvious that the best way to get an issue as important as fire safety finally addressed is to vote the Tories out on 12 December.