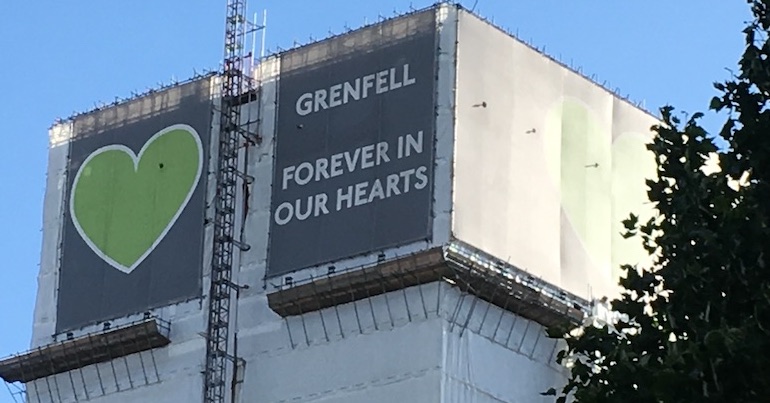 The Fire Brigades Union (FBU) has spoken out, saying “nothing much” has been done to improve firefighter training since the Grenfell Tower fire in 2017.

This came shortly after news emerged that the inquiry report about the fire will be published on 30 October 2019. Grenfell survivors and bereaved families fear this means it will be “buried in Brexit”.

“An excuse for Government to do nothing”

On the night of the fire, it’s thought that 999 operators told over half of the 72 people who died to remain in their flats. A full evacuation order came two hours later. But by then, “toxic black smoke” had filled the building which was also engulfed in flames. It’s expected that the inquiry report will “criticise the firefighting response at Grenfell”. Yet nothing’s been done yet to change the so-called ‘stay-put strategy’.

FBU general secretary Matt Wrack criticised failures to examine the “feasibility of high-rise evacuations” and put nationally-agreed measures in place to prevent another tragedy. According to the Telegraph, Wrack criticised fire policy “fragmentation”. He feels since 2017 “nothing much” happened to help firefighters approach a similar disaster. He continued:

It just seems to be a process of kicking the can down the road, an excuse for Government to do nothing – and nothing significant has happened in the past two and a half years. We were promised change, I haven’t seen any change.

With stay-put, why would you sit back and wait for three years before doing something?

Is the inquiry able to say what the answer to stay-put is, or is it going to say ‘someone needs to do something about stay-put’?

At which stage you ask, ‘why couldn’t you have done that within six months of the fire?’.

“Burying it in Brexit”

As The Canary reported on 4 October, chair of the Grenfell United campaign Natasha Elcock wrote to inquiry chairman Martin Moore-Bick. She urged Sir Martin to seek a new date for the inquiry report. Because publishing “the report on October 30”, she said, “risks burying it in Brexit”. Elcock criticised the lack of consultation with bereaved families and survivors. She also noted:

This is not the first time we have had to question whether bereaved families and survivors are really at the heart of this inquiry.

the value, importance, and national interest of the disaster to the bottom of the pile of continued disrespect and neglect.

It also stressed the need to bring the report publication forward to give “it the full public attention that it needs and deserves”. Justice 4 Grenfell also insisted:

The bereaved and survivors and community will not be silenced or shut down by governmental tactics of cloaking and silence.

For the 72 known souls who perished at the hands of social indifference, neglect and malaise; that their voices must be heard and their story told.