As he plunges the country into chaos, Boris Johnson thinks the royals need a new yacht - Canary 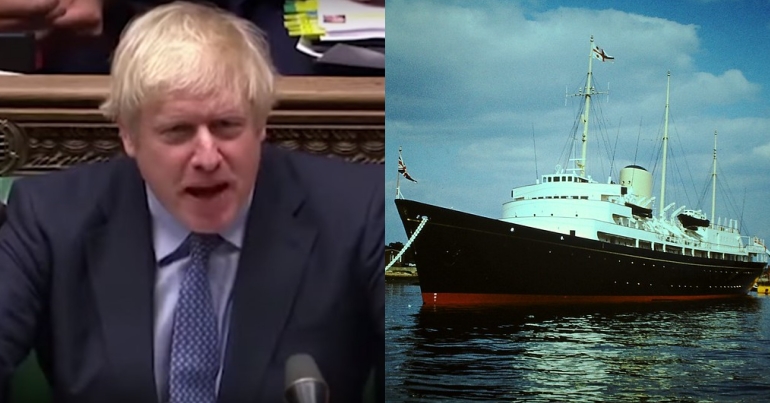 The UK is just over three weeks away from the great uncertainity of leaving the EU on 31 October. And, given the reaction of the Irish government and the EU to Boris Johnson’s ‘two-border’ exit proposal, you could be forgiven for thinking the Tories aren’t taking this seriously. Or maybe they’re simply out of touch. Politicians that care about people would see the urgency to bring about change. But Boris Johnson takes a different approach.

Let them have yachts

And if we needed further evidence of that we can see it in Johnson’s current plan to spend £300m on yachts. He’s hatching this plan with Penny Mordaunt MP, who he sacked from his cabinet, to buy two £150m yachts. The plan is for the royal family to use these yachts for overseas travel and to help with relief efforts.

A country in crisis

People in the UK are already under severe strain and finding it difficult to make ends meet. The UN has had to warn the UK about this. But instead of working hard to reverse this suffering, Johnson plans to spend money on yachts so the royal family can travel around the world.

This is peak Tory. Millions in this country are living in poverty & using food banks, homeless dying on our streets & Boris Johnson is considering plans to replace Royal Yacht Britannia with two £150m ships paid for by the foreign aid budget! https://t.co/P4NhZSYApk

When people heard about this, they were understandably angry, and they weren’t shy about expressing it:

#bojo in a time of national crises wants to spend £300 Million on two luxury Yachts. These actions show that @conservatives don’t care about the homeless and poverty. Unless they’re removed they’ll take your tax and enrich their friends #gtto

I wonder if he'll ever do anything useful.? Like resign or die in a ditch.

One person suspected an ulterior motive for the gift to the royals:

While another person pointed out a very obvious place where this money should be spent:

One man responded in sheer disbelief:

Why stop at two ships? Let’s have a rocket to take them to Mars

And it’s not just the purchase of these two yachts that makes Johnson unsuitable for office. It’s also his record as a politician, a journalist, and on race that proves he’s unfit to hold any office or role that carries responsibility or authority. So he has no regard for the British people or the truth. Just resign.