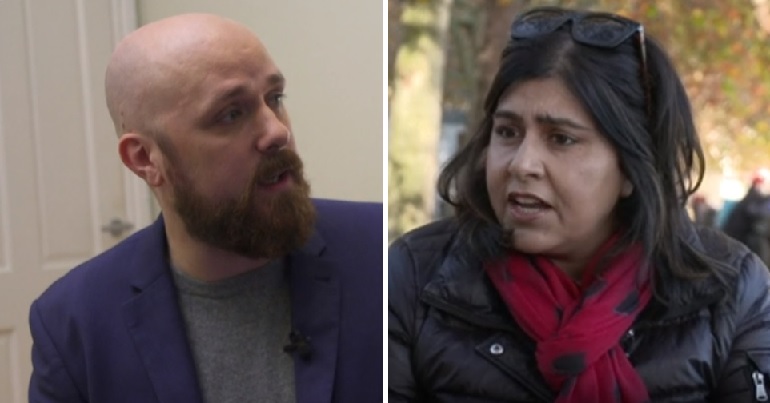 A new Tory resignation has shed further light on the Conservative Party’s Islamophobia crisis. And this is a crisis everyone in the UK needs to know about before they vote on 12 December.

Comments that “would be illegal” elsewhere

On 14 November, the BBC reported that “a Conservative association deputy chairman has resigned over what he believes are Islamophobia issues within the party”. These allegations related in part to controversial questions that a prospective Muslim Conservative candidate faced during an interview:

Deputy Chairman resigns over shocking questioning of Muslim applicants @Conservatives candidate selection interview
-“How many times a day do you pray? How often do you go to the mosque?”
Watch👇🏽more evidence of the appalling #Islamophobia in my Party https://t.co/YVj5qhSl9s

As former Tory co-chair Sayeeda Warsi explained, “if these comments were used in any other job interview, it would be illegal”. She continued by saying:

The pattern that I’ve seen over the last four years is complaints not being acknowledged; where they are acknowledged, there’s no follow-up.

She also stressed that this was:

completely consistent with the… behaviour that I’ve seen over a period of now four years. Three chairmen, two prime ministers, and nothing seems to change.

In 2001, Tory MP Andrew Lansley said there was “endemic racism” in his party. And it seems little has changed. Because while far-right groups are on the rise, with anti-Muslim racism at the centre of their hateful agenda, the Tory party faces an Islamophobia crisis which it seems to be doing very little about.

The culture of fear @Conservatives is deeply worrying.
Calling out #Islamophobia is seen by many MPs, candidates and activists ,whom I have spoken to, as a “career ending” move. 😢 https://t.co/zrY9uRhmUh

Breaking news –
Another dossier of Islamophobia within @Conservatives consisting of 25 current and former Councillors is presented to my Party today
Disgraceful that denial and lack of an enquiry has meant others are left to collate and present evidence https://t.co/0xfpN7BQOR

Appalled that today once again #MichaelGove when asked about @Conservatives #Islamophobia his defence was “whatabout” labour antisemitism @BBCr4today
So thought I’d retweet this from two weeks ago 👇🏽
How about we all deal with racism within our own Partys- root out the rot https://t.co/QhCidnHRgR

In July, Channel 4 revealed statistics suggesting endemic Islamophobia in the party, with 56% of its members agreeing that “Islam is a threat to the British way of life”. It also reported finding numerous Islamophobic posts online from apparent members. Then, at the 2019 Tory conference, an infamous panel discussion saw attendees defend Islamophobic comments, while panelists asked for the party to scrap the term ‘Islamophobia’. The Conservative Party in England, meanwhile, seems to be the only mainstream party not to have adopted the definition of Islamophobia of the All Party Parliamentary Group on British Muslims.

None of this will surprise the Muslim community, though. Because it has consistently called for official inquiries into Tory Islamophobia. Party leader Boris Johnson, meanwhile, has faced much criticism for his own Islamophobic comments. He also has close allies with alleged links with anti-Muslim organisations. So it’s little surprise that his government has consistently delayed plans to investigate the crisis.

The Conservative Party also continues to face allegations of antisemitism. Tory ties with antisemitic, far-right parties in Europe have been a particular cause for concern.

Warsi recently said the Tory Islamophobia crisis is “serious, substantial and widespread”, calling it an “institutional problem”. Nonetheless, there are still consistent attempts from opponents of Jeremy Corbyn’s Labour Party to convince people that his is the party we really need to worry about. For them, it’s Corbyn (the veteran anti-racist who’s taken firm action against racism in recent years) who’s the problem – not Johnson (who’s essentially ignoring a serious racism crisis in his party). Despite very small amounts of racism in Labour and “widespread” amounts in the Conservative Party, the ‘crisis’ is apparently Corbyn’s – not Johnson’s.

We must fight racism, wherever it appears. But when anyone tries to tell us the Tories are the ‘good guy’ in this story and Labour’s the ‘bad guy’, we need to call them out vigorously. Because the facts say otherwise.