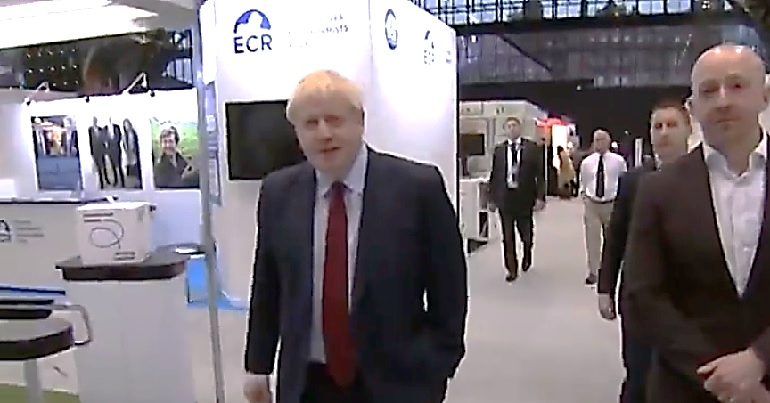 On 1 October, Boris Johnson avoided an interview with Channel 4 while speaking to a number of other media outlets. This may have been because Channel 4 actually does its job and consistently holds the Conservative Party to account. But even a presenter at corporate giant Sky thought Johnson’s move was “pathetic”.

The Channel 4 team publicly criticised Johnson for hiding from their questions:

Democracy is weakened by a lack of media plurality. Instead we have to ask others his thoughts & despite days covering his every movement not be granted the chance to ask him questions directly. At a crucial time in the UK’s history political leaders have got to stop being #frit

Sad and mystified that Boris Johnson is not being allowed onto @Channel4News today. Our many viewers would like to see him explain his Brexit and other plans and see him scrutinised by us. He’s a grown up. He can take serious questions. It is a missed opportunity for him.

Boris Johnson responds to why he won't be speaking to Channel 4 News today, despite agreeing to interviews with other major broadcasters. pic.twitter.com/hnu7cqztKk

And it seemed that Johnson’s move was even too much for right-wing Sky presenter Adam Boulton, who called it a:

What was Johnson scared of?

A journalist recently accused Johnson of sexual misconduct. The PM has denied the allegations, though, with supporters claiming these were ‘private matters’.

In reality, as many have pointed out:

This is wrong and offensive. She was a young journalist. He was editor. It was a work lunch.

Downplaying sexual harassment allegations as ‘private’ has been used to silence women for centuries.

Dear colleagues. Please stop calling allegations about groping “private life”. It isn’t private life. Having affairs can be said to be private life. Groping is about public conduct, respect for women and is potentially criminal.

Could this be why Johnson wanted to avoid Channel 4 scrutiny?

Or could it possibly be because Channel 4 has vocally called out the Conservatives’ Islamophobia crisis?

In July, Channel 4 revealed statistics suggesting endemic Islamophobia in the party, with 56% of its members agreeing that “Islam is a threat to the British way of life”. It also reported finding numerous Islamophobic posts online from apparent members. This wasn’t exactly news to the Muslim community, which had consistently called for official inquiries into Tory Islamophobia. But now, we have a Conservative prime minister who has faced much criticism for his own Islamophobic comments, and who has team members with alleged links with anti-Muslim organisations. So this is probably the kind of scrutiny Johnson could do without, especially with a racism row currently blowing up at conference.

On 30 September, the president of the National Union of Students (NUS) pulled out of the Conservatives’ conference, claiming that it “openly denies the existence of Islamophobia”:

I came to Manchester for #CPC19. I had every intention of proudly representing millions of students across our country. However, as President of @nusuk and a Muslim woman I cannot in good conscience participate in a Conference that openly denies the existence of Islamophobia.

At a time when far-right groups are on the rise, with Islamophobia at the centre of their hateful agenda, she said:

You can't deny my own lived experiences, and the racism faced by Muslims from the far-right, parts of our media and in communities across our country daily. You can't hide from this deep and horrific problem. For this reason I have withdrawn from all engagements at #CPC19.

Criticism came from within the Conservative Party, too. As Business Insider reported, former Tory chair Sayeeda Warsi said she was “truly ashamed” of her party. Why? Because a conference “panel discussion” saw attendees “defend comments made by Boris Johnson about Muslim women, while panelists called for the term Islamophobia to be scrapped”.

Speaking of the meeting in question, Warsi stressed:

“Sunday’s meeting was disingenuous, divisive and peppered with dog whistles. Maybe it’s time to acknowledge that it was very suited to today’s Tory party” my opinion piece on #CPC2019 #Islamophobia https://t.co/FiVEGtcXs8

She also said she was “sick to my stomach” that “British Muslims have become a convenient scapegoat for populism, a butt of insulting language to increase poll ratings & an event on Islamophobia is an opportunity to demonise Muslims”. And she called on establishment media outlets to “wake up” to this, asking:

At what point r @BBCNews @SkyNews @AndrewMarr9 @Peston @bbclaurak @BBCr4today & others going 2wake up?
Investigate the panelist’s, the hosts, their history on Islamophobia- have any ever defended British Muslims?
When the”respectable” rationalise racism we are in serious trouble https://t.co/0spUKhwPwP

She then gave a powerful answer to an ill-thought-out Twitter question from her party:

What more could you ask for?
I’m asking you to stop being racist
To stop demonising muslims
And to have an Independent Inquiry into #Islamophobia as promised by the PM on national TV 👍🏼#CPC19 #CPC2019 https://t.co/jUpCdOiR66

By shunning a Channel 4 interview, Johnson showed how keen he is to avoid meaningful scrutiny. But we mustn’t let him. We must use every opportunity possible to hold him and his colleagues to account for their elitism, sexism, and racism.

Britain deserves so much better. And we need to demand better.