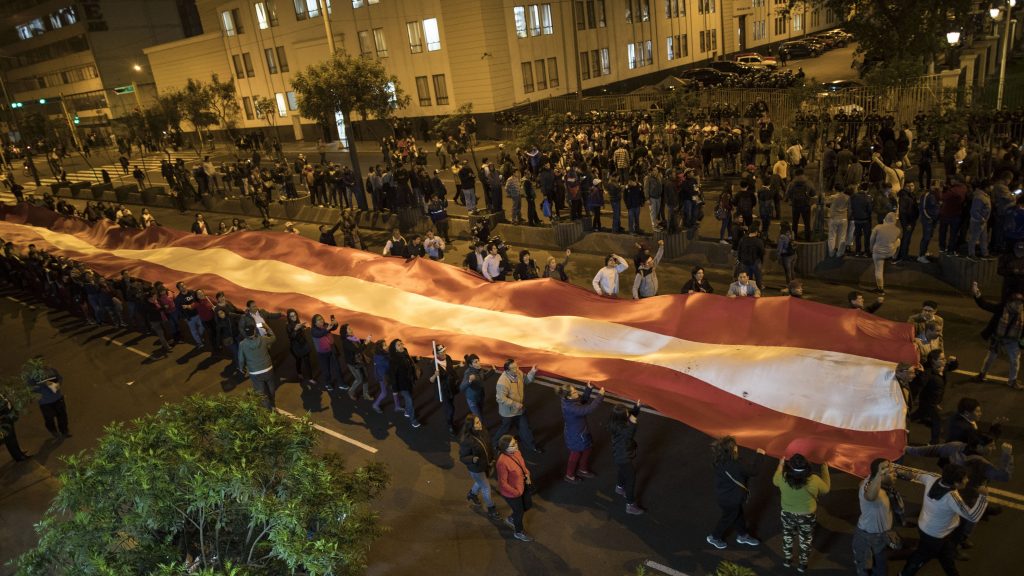 “Get out, corrupt politicians!”

Nearly every living president has been implicated in the Odebrecht graft scandal, leading to plummeting faith in public institutions. In this environment, thousands of people took to the streets in the capital, Lima, to celebrate Vizcarra’s decision.

“We are making history that will be remembered by future generations,” said centre-right Vizcarra in a national address on Monday evening. “And when they do, I hope they understand the magnitude of this fight that we are in today against an endemic evil that has caused much harm to our country.”

His decision was cheered by Peruvians who have been clamouring for new congressional elections to replace the majority right-wing party, led by a former first daughter and presidential candidate who is now behind bars. Opposition leaders in congress, however, refused to leave and instead approved a resolution to suspend Vizcarra for “breaking the constitutional order”. Minutes later, they swore in Mercedes Aráoz, the vice president who recently broke with Mr Vizcarra over his push to hold early elections next year.

Hundreds of citizens, meanwhile, gathered outside congress honking horns, chanting and carrying signs with phrases like “Get out, corrupt politicians!” Others tried to force their way into the legislature to get legislators out but were driven back by police with tear gas.

No other institution appeared to back Aráoz. The nation’s military and governors issued statements supporting Vizcarra.

At odds with an establishment plagued by corruption

Vizcarra rose to the presidency last year (having served as vice president) after Pedro Pablo Kuczynski resigned following revelations that his private consulting firm had received undisclosed payments from Odebrecht, the Brazilian construction giant that has admitted to doling out millions to politicians around Latin America in exchange for lucrative public works contracts.

With little political experience, Vizcarra rose in popularity as he championed anti-corruption initiatives, but he struggled to push legislation through congress. Instead, he repeatedly used a vote of confidence, through which he could threaten to dissolve the legislature if legislators did not approve his proposals. The mechanism is aimed at resolving conflicts between the executive and legislative branch and allows the president to shut down congress if legislators reject two such votes. Congress rejected a previous vote of confidence during Kuczynski’s administration.

“Popular with the public”

As the FT reports:

[Vizcarra’s] anti-corruption quest has been popular with the public. The president’s approval ratings have moved between 50 per cent and 60 per cent, and jump each time he fires another broadside at the deeply unpopular congress and the judiciary.

Peru is the Latin American country where corruption is the top problem for the largest number of people. 1/4 pic.twitter.com/r7N5GV0f7r

Peru is the country where parties are least trusted. 2/4 pic.twitter.com/lrPiNqsMeF

Peru is the country most receptive to presidential coups in Latin America. 3/4 pic.twitter.com/Yr5fmtb3Gx