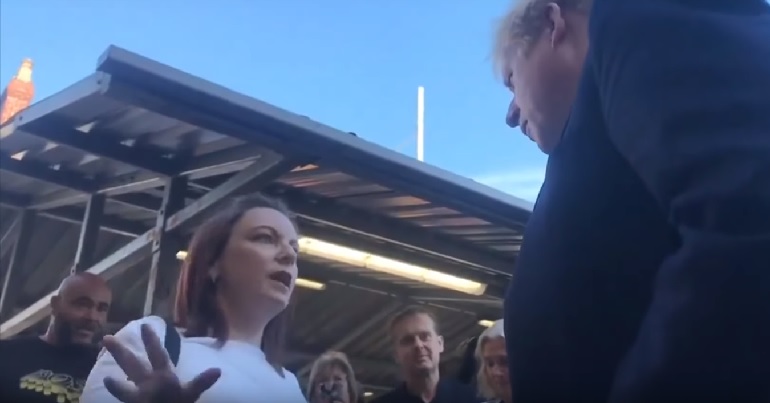 The last time Boris Johnson went to Yorkshire, things didn’t exactly turn out as he’d hoped. And when he went again, on 13 September, a pattern began to emerge.

A week ago, Johnson launched a Trump-style stunt in Yorkshire, making a disastrous speech in front of student police officers. People also heckled him, jeered, protested, and one asked him to “please leave my town”.

Nonetheless, Johnson went back to Yorkshire a week later. And local people again sought to hold him to account.

One woman in particular captured people’s anger at Johnson and his party with a brilliant face-to-face takedown of disastrous and unnecessary Conservative-led austerity. Speaking in Doncaster, she said:

people have died because of austerity. And then you’ve got the cheek to come here and tell us austerity’s over and it’s all good now

Indeed, just one ‘cost-saving’ policy in the last nine years of Tory-led rule – cutting public health spending – has led to over 130,000 premature deaths in the UK.

Why’ve we all of a sudden got loads of money? … You’re gonna put the same amount of police on the street as what you’ve took off.

The NHS money is coming from a central pot that each trust were told to save in the last spending review. Not new money at all. 20000 police this replaces the 20000 reduction under austerity. Give the woman a medal and those booing a good slap #Doncaster https://t.co/OZAzcB2cHt

"People have died because of austerity" – this needed to be said to Boris Johnson.

Our country has been betrayed by the Conservatives who have lined the pockets of the wealthy at the expense of people's lives and communities.

From Morley to Doncaster, when Johnson visits northern towns, people see through his bluff and bluster con-trick.

Austerity has caused untold misery and we're not going to let him get away with it. pic.twitter.com/vCvhREwXkl

Boris Johnson's government seems very upset that policing is in a crisis. Have they forgotten this crisis was caused by the cuts that all the members of his government supported?https://t.co/53hgZTcyU1

Over in Rotherham, things didn’t go much better. Because one heckler brought up Johnson’s highly controversial suspension of parliament, asking him to go “back to parliament”:

Johnson told to "get back to Parliament" and sort out "the mess you created" during his speech in Rotherham today.

Someone buy that man a drink or three — really well done, thank you from all of us 🍻pic.twitter.com/0Y8Nl0xEiU

Like other places in Yorkshire Johnson has visited recently, both Rotherham and Doncaster voted to leave the EU (by 67.9% and 69.0% respectively). So it’s clear that he’s currently doing his best to shore up support in Brexit-voting areas. Doing terribly as prime minister, he seems to have given up and just started his general election campaign already. But in doing so, he’s exposing how unpopular he and his party are even in heavily pro-Brexit areas.

Conservative Party icon Margaret Thatcher decimated working-class communities and workers’ rights. That’s why many communities throughout Yorkshire and Britain celebrated when she died. Because she left unemployment, destruction, and poverty in her wake. Johnson, meanwhile, is following in Thatcher’s footsteps with his hard-right government. That’s why he’s been called an “ardent Thatcherite” and even “worse than Thatcher”.

Brexit may be a big issue in Britain today. But there are so many more important issues too. So everyone should remember that Johnson has been a faithful supporter of the most callous Tory-led governments in living memory. And no amount of cynical politicking should fool us into forgetting how many lives the Tories have destroyed.