Despite needing another 309 seats, Jo Swinson still believes she can be the next PM - Canary 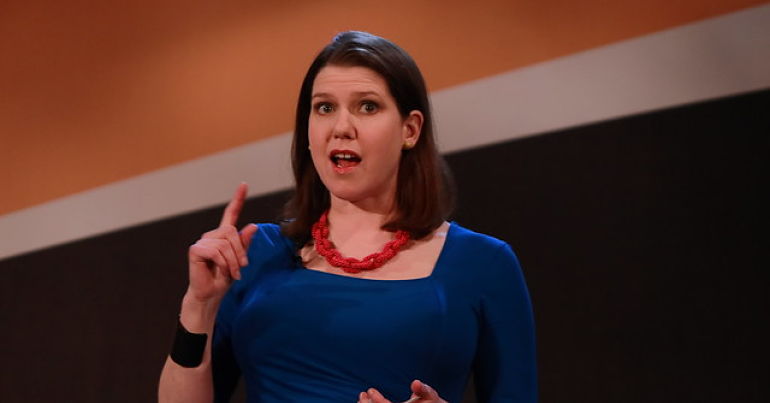 Just ahead of its autumn conference, leader of the Liberal Democrats Jo Swinson actually believes her party can win at least 326 seats at the next election. Swinson claims:

Our polling suggests there are hundreds of seats where Liberal Democrats are in contention now.

I’m not naïve, I recognise that this is ambitious – but I do think the seismic change in politics makes it possible.

But when we take a look at that claim, we see that it’s more than just naïve, it’s completely laughable.

Dose of reality for Swinson

Despite winning 62 seats at the 2005 election, its highest ever, the party has been on a downward spiral ever since. Not least, because this includes the party’s time in coalition with the Tories. So when Swinson says she couldn’t support Corbyn as PM due to ‘major policy difference’, she’s masking her true tory allegiances.

In the 2015 election, it crashed to just eight MPs. A slight improvement just two years later along with recent defections brings that number to 17. That’s still 309 seats off.

So if Swinson is to turn 17 into “hundreds”, she has a hell of a job on her hands. And judging her on her record and the online reaction, it’s not just mission impossible: it’s mission laughable.

Immediately people began to put Swinson straight on how ridiculous her claim was:

And while Swinson believes “that we can do this”, it seems many people disagree:

Asked if she thought she could become Prime Minister, Jo Swinson said “Absolutely".

And she said “I'm not naive, I recognise that this is ambitious".

Not naive!?! — just how much more deluded and up yourself can you get Swinson.#YellowTorieshttps://t.co/p7efM1Ixza

In a move that lost Boris Johnson his one-vote majority in parliament, MP for Bracknell Dr Philip Lee defected to the Liberal Democrats. This move didn’t go down well with all her party members. In fact, it forced Lib Dem LGBT+ chair, Jenny Rigby, to resign. Rigby said, based on Lee’s voting record, that he’s “not a liberal”.

Not forgetting her voting record of course!

And as The Canary reported, Swinson’s own voting record shows how unfit she is. This is a further reason why Corbyn could not work with her.

Stop living in a dream world

But ignoring all of this if we can, simple mathematics tells you how impossible Swinson’s task is. It’s time Swinson woke up. The British people are standing up to the current prime minister. And the tide is turning against austerity and all those who enabled it.