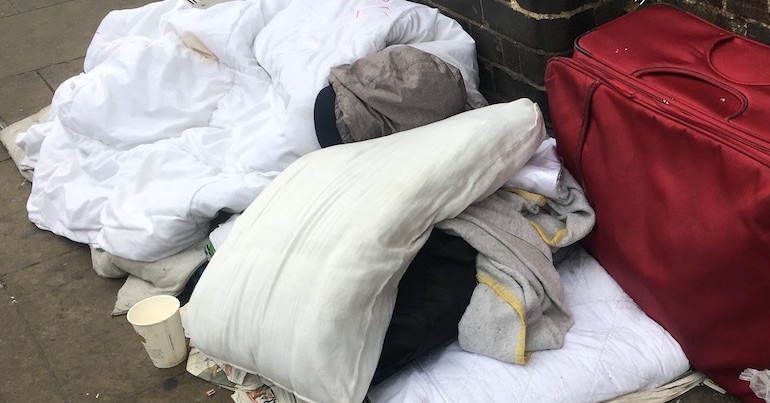 On 1 October, figures from the Office for National Statistics (ONS) showed that in 2018:

These figures are shameful in a country as rich as ours.

High and rising homelessness is not inevitable. The number of people sleeping on our streets fell under Labour but has risen since 2010 as a direct result of the Conservatives slashing investment for low-cost homes, cutting back housing benefit, reducing funding for homelessness services, and denying protection to private renters.

hundreds of people were forced to spend the last days of their lives without the dignity of a secure home.

This is a moment to pause and reflect on what matters to us as a society. These tragic deaths are the consequence of a housing system that is failing too many of our fellow citizens.

Other homeless charities echoed that this is a “national tragedy”:

BREAKING – 726 people died while homeless last year. This is a national tragedy. All summer we have been working with clients to make paper flowers to remember the people who have died on our streets. Help us take action> https://t.co/eADte9Oumz pic.twitter.com/AyOJmqYjGj

In June, Labour directly linked rising homelessness figures to areas of the UK that have seen the highest funding cuts under this Conservative government.

“Behind these statistics are human beings”

Behind these statistics are human beings, who like all of us had talents and ambitions. They shouldn’t be dying unnoticed and unaccounted for.

Labour’s Clive Lewis also pointed out that these figures reflect the deaths of real people:

Recent ONS stats estimate 726 deaths of homeless people in England. People like Kane Walker. He wasn’t just a statistic. He was in his own words ‘someone’. https://t.co/HBe6KKepTA

Labour has “committed to” end “rough sleeping within its first five years in government”. It will make 8,000 affordable homes “available for people with a history of sleeping on the streets”. In 2018, Healey also promised an additional £100m fund to provide emergency winter accommodation for people sleeping rough.

It’s crucial that Governments urgently expand the safeguarding system used to investigate the deaths of vulnerable adults to include everyone who has died while street homeless, so we can help prevent more people from dying needlessly. Because in this day and age there is no excuse for anyone dying without a safe place to call home.