After cosying up to Steve Bannon, Boris Johnson unleashes an Islamophobic attack on Muslim women - The Canary 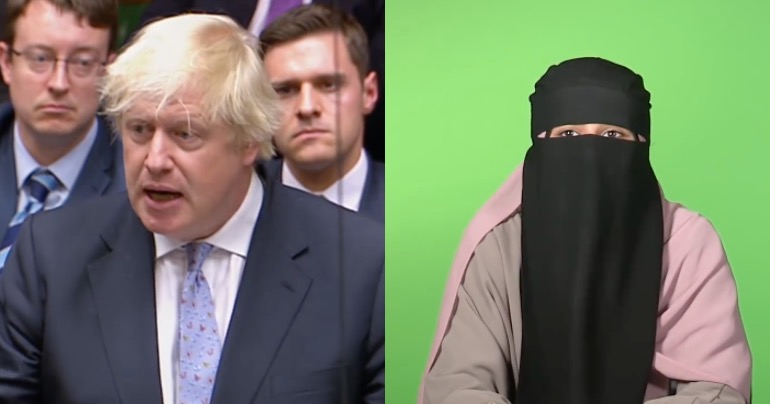 Not long after it was revealed that Boris Johnson had been communicating with Steve Bannon, the ex-foreign secretary unleashed a series of insults about Muslim women who choose to wear a burqa. Johnson’s comments will no doubt worry the Conservative Party, which is currently trying to shake off evidence of Islamophobia.

In his Telegraph column [paywall], Johnson ridiculed the appearance of Muslim women, claiming “it is absolutely ridiculous that people should choose to go around looking like letter boxes”. He then asserted that if a female student goes to school or university “looking like a bank robber”, the university should feel entitled to ask her to remove her burqa.

As for individual businesses or branches of government – they should of course be able to enforce a dress code that enables their employees to interact with customers; and that means human beings must be able to see each other’s faces and read their expressions. It’s how we work.

He also stated that “If a constituent came to my MP’s surgery with her face obscured, I should feel fully entitled – like Jack Straw – to ask her to remove it so that I could talk to her properly”.

Johnson was addressing a new law in Denmark which bans the niqab and burqa in public. Johnson said that he does not agree with a complete ban on face coverings in public, Stating:

if you go for a total ban, you play into the hands of those who want to politicise and dramatise the so-called clash of civilisations; and you fan the flames of grievance. You risk turning people into martyrs, and you risk a general crackdown on any public symbols of religious affiliation, and you may simply make the problem worse

Muslim women are having their burkas pulled off by thugs in our streets & Boris Johnson's response is to mock them for "looking like letter boxes." Our pound-shop Donald Trump is fanning the flames of Islamophobia to propel his grubby electoral ambitions.https://t.co/51YTjIdT4x

Boris Johnson says a woman in niqab is "looking like a bank robber" or "looking like letter boxes". Is this language anything other than pandering to the far-right? Deeply disappointing that @Telegraph platforms this disgusting language.https://t.co/UegBG1f81T

Former Conservative chair Baroness Warsi confirmed the deep-rooted Islamophobia problem within her party earlier this year. However, the party has done little to address and combat this problem and the media has made very little noise.

Johnson is the latest of many Tories to fuel Islamophobia. His text messages with prominent far-right figure Steve Bannon worried many people, considering Bannon’s hateful views on Muslims and multiculturalism. But unless the likes of Johnson are held to account by both their party and the mainstream media, Muslims will continue to be marginalised, targeted and attacked.

– Read our other articles on Tory Islamophobia.