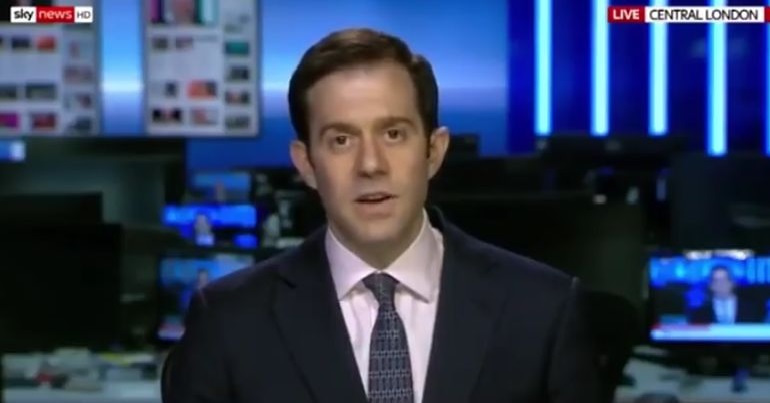 CORRECTION: This article was updated at 12.15pm on 7 August. Originally, it incorrectly said Jonathan Sacerdoti was a founder of Campaign Against Antisemitism. It’s now been changed to show he was a former spokesperson of the group, not a founder.

A pro-Israel campaigner has bragged about “weaponising” antisemitism to banish Jeremy Corbyn from “public life”.

Jonathan Sacerdoti, who is a former spokesperson for Campaign Against Antisemitism (CAA), made the admission during an interview on Sky News. And he made it clear that his motivation for wanting Corbyn gone is, in part, opposition to his position on Israel.

Corbyn published an article in the Guardian addressing concerns over antisemitism in his party on 3 August. Sky News invited Sacerdoti and Labour supporter Barnaby Raine onto the programme to discuss the Labour leader’s latest comments on the issue.

Clearly, the position on antisemitism Corbyn laid out in the Guardian didn’t persuade Sacerdoti. So the Sky News presenter asked him:

In your view, Mr Sacerdoti, what could Jeremy Corbyn do to satisfy critics such as yourself?

He could get out of public life. He’s made it very clear throughout his political career where he stands.

The mainstream media has trawled through Corbyn’s life of late, dredging up incidents from his past that some people claim show he’s antisemitic. The Labour leader, for example, hosted an event in 2010 where a holocaust survivor compared Israel’s behaviour to that of Nazi Germany.

Sacerdoti raised this event as evidence of Corbyn’s alleged antisemitism. He also highlighted the Labour leader’s appearances on Iranian TV – an enemy of Israel – as proof of the same.

Nothing wrong with it

Raine, however, called out Sacerdoti on his admission:

Well, there you have it. We were just told by Mr Sacerdoti that the only thing Jeremy Corbyn can do to stop this row is to get out of British public life. I’m concerned about fighting antisemitism… I know that Jeremy Corbyn wants to do that…

But you just, I think, made clear that your agenda here is not simply about tackling antisemitism… you also simply want to get rid of Jeremy Corbyn…

Sacerdoti defended himself, raising pushback to Zac Goldsmith’s explicitly Islamophobic mayoral campaign as an example of “weaponising” racism. He then said:

Raine disputed that Corbyn ‘tolerates’ antisemites. He said the Labour leader “wants to fight” the bigotry in the party against Jewish people which “goes back millennia”. Raine also earlier warned against people ‘conflating’ two issues in the antisemitism debate: the Middle East and the “safety and security of Jews in Britain”.

In the interview, Sacerdoti himself proved that he’s doing that conflating himself. He said that one of the reasons Corbyn’s party chose not to adopt the full text of the International Holocaust Remembrance Alliance’s (IHRA) antisemitism definition document was because:

it more or less totally describes his own world view and his own position on Israel and Jews. And to do so would be to admit himself that he’s an antisemite.

In that one sentence, Sacerdoti validated critics’ opposition to the IHRA definition. Because he revealed that he is branding Corbyn an antisemite, in part, because of his “position on Israel”. And he’s using the IHRA definition to back up his case.

That’s why there’s opposition to some aspects of what the IHRA proposes, despite there being widespread agreement that we need to tackle the problem of antisemitism and racism in all its forms. Because it could allow people like Sacerdoti to ‘weaponise’ antisemitism and banish democratically elected leaders and others ‘from public life’ because they criticise Israel’s actions.