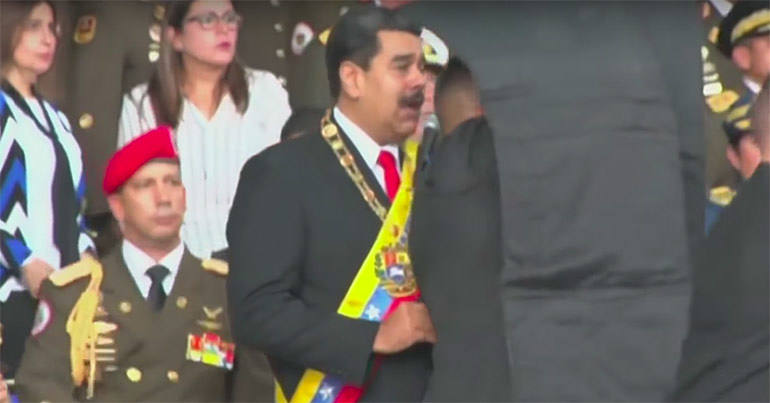 On 4 August, Venezuelan President Nicolás Maduro survived an assassination attempt. Several drones armed with explosives were blown up overhead as the Latin American leader was giving a speech in Caracas. Some mainstream media outlets, however, decided to push conspiracy theories rather than showing due concern.

Attempted assassination of an elected leader

Thousands of eyewitnesses at a military parade saw the machines fly over the procession, one heading in the direction of the stage where the president was speaking. Maduro’s words were punctured by the sound of two explosions. Security services quickly moved in to protect him. Seven soldiers were reportedly injured.

Like clockwork, far-right conspiracy theory websites were quick to speculate on whether the assault against the left-of-centre president had been a ‘false flag operation’ – orchestrated by the Venezuelan government as an excuse to crack down on the opposition.

Such accusations are to be expected from the likes of InfoWars shock-jock Alex Jones, who posted a video headlined Was Venezuelan ‘drone attack’ on Maduro a false flag? just a day later. The Daily Mail also questioned if it was “faked”.

But why are outlets like the Times, the BBC, and even the Guardian following suit?

Many mainstream media reports described the event as an ‘alleged’ assassination attempt, using quotation marks around ‘drone attack’. This was in stark contrast to the way many major news outlets covered (or generally failed to question) very dodgy claims coming from the UK’s Conservative-led government during the Skripal case, or statements from the Turkish government amid the failed coup attempt in 2016.

The Times [paywall] used the headline ‘Bomb in a Drone’: President Maduro’s excuse for crackdown, throwing suspicion on whether the event was perhaps planned by the government to consolidate power which was reaffirmed in recent elections.

The BBC went with Venezuela ‘drone attack’: Soldiers seen running, and speculated on the actuality of the attack while questioning the loyalty of Venezuela’s military to the president.

Perhaps some of the reporting can be chalked up to the genuine confusion surrounding the circumstances of the attack. But in this instance, are mainstream media outlets showing due diligence in describing a complicated event, or are they wilfully ignoring the facts to discredit a left-wing leader?

One of the reasons for the heightened speculation may be one paragraph from an Associated Press report. In the article, AP reported that three anonymous firemen at the scene of the strike had said that one of the blasts was caused not by a drone, but by a gas tank explosion. According to AP, “They provided no further details on how they had reached that conclusion”.

Another source to muddy the waters was Rocío San Miguel, a military analyst who heads investigative website Control Ciudadano. He claimed in an interview with the Washington Post that one of the explosions was caused by a Venezuelan military drone, asserting that it was “a security mistake”.

These claims should have been allayed by numerous reports from those at the parade and dispelled when interior minister Nestor Reverol gave a press conference presenting the media with the specifics of the attack.

But this has not stopped Western journalists treating Maduro’s government with contempt. This is in part because of those Maduro blames for attacks on Venezuela’s economy and sovereignty.

A few hours after the drone strike, Maduro gave a televised address condemning the attempted assassination, suggesting that the assault was likely to have been orchestrated by local and regional far-right groups. He said:

They have tried to assassinate me today, and everything points to the Venezuelan ultra-right and the Colombian ultra-right.

Both the Colombian government and the Venezuelan opposition have denied any involvement.

Following the arrest of six suspects in the case, Maduro stated:

the preliminary investigation indicates that many of those responsible for the attack, the financiers and planners, live in the United States in the state of Florida.

I hope the Trump administration is willing to fight terrorist groups that commit attacks in peaceful countries in our continent, in this case, Venezuela.

US national security adviser John Bolton responded by denying any US involvement in the assassination plot. He went on to join Alex Jones, the Daily Mail, and the Guardian by floating the claim that the attack could have been “a pretext set up by the regime itself“. So that’s essentially the US government accusing Venezuela of a false-flag attack.

Maduro’s concerns regarding the US and the right-wing in Latin America are routinely dismissed or ignored by the mainstream Western press, and used [paywall] as a stick to beat him with.

But when US secretary of state Mike Pompeo – former CIA director and now America’s most powerful diplomat – confirms that the US has been pushing for government transition in Venezuela by “trying to help them [the opposition] understand the things they might do so that they can get a better outcome for their part of the world”, it’s not too difficult to understand Maduro’s anxieties.

No matter the outcome of Saturday’s attack, the fact that much of the Western press is happy to peddle conspiracy theories about a left-wing government in Latin America is cause for alarm. If mainstream media outlets are truly concerned about ‘fake news’, they should stop giving it oxygen. Their opinions about Venezuela’s government are no excuse.

– Read our other work on Venezuela.