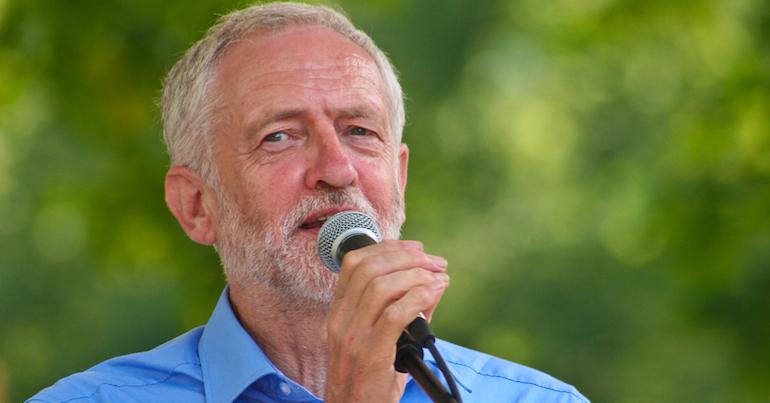 A leading US Jewish group has sent an open letter in support of Jeremy Corbyn. And this show of global solidarity is particularly powerful and important amid the ongoing row about antisemitism in the UK Labour Party.

On 5 August, the Morning Star published an open letter from Jewish Voice for Peace. It states ‘concern’ about:

the joint statement of the three Jewish newspapers in the UK that asserts false definitions of anti-semitism for political ends and falsely claims that a British government led by Jeremy Corbyn and the Labour Party would somehow represent an “existential threat to Jewish life”.

As The Canary reported in an exclusive interview, Jewish News foreign editor Stephen Oryszczuk has also insisted that Labour does not represent an “existential threat” to Jewish people. And he has called recent attacks on Corbyn “repulsive”.

This letter from Jewish Voice for Peace is further evidence of the support and solidarity for Corbyn coming from the Jewish community. However, it also adds a vital element to the current issues by foregrounding the specific links with the rise of far-right violence in the US.

“Criticism of Israel is not the same as anti-semitism”

The letter makes a vital point:

we stand with those many Jews across Britain, the US and the rest of the world, and with our Palestinian allies, who all know that criticism of Israel is not the same as anti-semitism.

It also acknowledged that antisemitism is rising, but that the biggest danger is from the far right. As Jewish Voice for Peace explains:

In our country it shows up in the neonazis marching through Charlottesville, in white supremacist hate groups rising across the country, in former Ku Klux Klan leader David Duke who offered full-throated support to the president following Donald Trump’s inauguration.

And it makes clear that political “attacks” like the one aimed at Corbyn “dangerously divert attention from real anti-semitism”.

This letter is a true show of solidarity for Corbyn.

In a statement on 3 August, Corbyn clearly stated that antisemitic views “have no place in the Labour party”. He also stood by the decision to challenge one example used in the International Holocaust Remembrance Alliance (IHRA) definition of antisemitism, because that example relates to “free speech in relation to Israel”.

As this letter states:

We believe the three Jewish papers’ claim that not including that phrase is anti-semitic is simply wrong.

Jewish Voice for Peace sees clear parallels between the situation in the US and the UK. And ultimately, this leads to a critical situation in challenging Israel’s actions in Palestine:

as supporters of Palestinian rights and equality for all, we are similarly concerned with these attacks in the UK. The real threat of anti-semitism does not come from criticism of Israel. Rather, as noted by Rabbi Joseph Berman of Jewish Voice for Peace in the United States, “anti-semitism is being cynically exploited to target advocates of Palestinian human rights.”

For those living under the blockade in Gaza, or for the 9,600 Palestinians killed by Israelis since 2000, it’s vital that we listen to Corbyn, his supporters and the growing number of Jewish people who are speaking out.

It is also vital, as this letter states, to support those – like Corbyn – who are calling for real change:

We believe political leaders have a responsibility to condemn and to fight against the linked dangers of white supremacy, xenophobia, anti-Arab racism, Islamophobia and anti-semitism — and they should be able to do so without fearing intimidation or personal attack.

To criticise Israel is not antisemitic. To claim that it is has become a dangerous political football.

It’s time to call time on that match and to challenge the danger of antisemitism everywhere it exists – which, as this letter points out, is all too often on the far right.