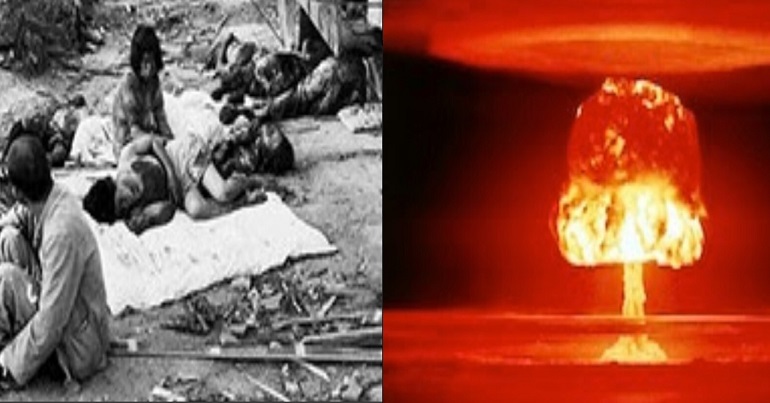 It’s now 73 years since the bombing of Hiroshima. And it’s time we discussed why the bombing really took place.

“The death and destruction were indiscriminate”

On 6 August 1945, the US Air Force nuked the Japanese city of Hiroshima. The bomb they used was called ‘Little Boy’.

As Dr John E. Coggle noted in his review for the Bulletin of the Atomic Scientists (BAS):

140,000 died either within hours of the attack or within the following few weeks.

An estimated 37,000 people entered Hiroshima during the first week after the dropping of the bomb, and were exposed to varying levels of radiation as a result, according to a 1977 report.

Two days later, the US dropped another bomb, Fat Man, on the city of Nagasaki, killing around 70,000 more.

The war would have been over in two weeks without the Russians entering and without the atomic bomb.

The atomic bomb had nothing to do with the end of the war at all.

The US Strategic Bombing Survey, established by the US secretary of war in November 1944, concluded unequivocally on 1 July 1946 that:

Japan would have surrendered even if the atomic bombs had not been dropped, even if Russia had not entered the war, and even if no invasion had been planned or contemplated

In short, numerous key figures in the US military leadership not only considered the bombing unnecessary, but they actively opposed the use of nuclear weapons by President Truman.

It is my opinion that the use of this barbarous weapon at Hiroshima and Nagasaki was of no material assistance in our war against Japan.

My own feeling is that in being the first to use it, we had adopted an ethical standard common to the barbarians of the Dark Ages.

Japan was, at that very moment, seeking some way to surrender with a minimum loss of ‘face.’…

And Eisenhower was no minor military figure. He was the supreme commander of allied forces in Europe.

He also expressed his opposition both to secretary of war Henry L. Stimson and President Truman:

General Omar Bradly confirms that, in his presence at lunch that day, when Truman said he was going to use the atomic weapons, Eisenhower challenged him directly.

Naturally, I… acquainted President Truman with my own ideas about the best course to pursue in defeating Japan as fully as I had done with President Roosevelt.

A shot across the bows

That the nuking of Japan was a political decision does not appear to be contested by serious scholarship.

But there is still a question as to why the bomb was used.

Historians including Alperovitz and Peter Kuznick say the evidence strongly suggests the use of the bomb was designed to scare the Russians, despite the fact that it was the Americans who asked the Soviet Union to join the allies in Japan to bring the war to a speedy end.

… three leading scientists, went to the White House to see Truman… to talk to him about not using the bomb. Truman sends them to South Carolina to see [soon to be secretary of state] Jimmy Byrnes…

Too much to contemplate

Despite the volumes of evidence that the use of nuclear weapons was a political rather than a military decision, to this day, establishment sources parrot the line that it was tragic but necessary.

That tens of thousands of people could be so easily murdered by Western leaders, for reasons of prestige and political calculation, seems too much for many even to contemplate. And yet the evidence has long shown this to be the case.

Today, the UK is pushing ahead with spending £205bn on its Trident nuclear system. And the US is continuing with its $1tn modernisation programme, including to make smaller, ‘more usable‘ nukes.

The BAS, meanwhile, has put its “Doomsday Clock” at “two minutes to midnight [pdf, p4]“:

the closest the Clock has ever been to Doomsday, and as close as it was in 1953, at the height of the Cold War.

If the murderousness and madness of nuclear weapons is to be overcome, then it is incumbent on all of us to inform ourselves and to push for the denuclearisation of all states.

– Watch three different interviews about the use of the Atomic Bomb.

– Learn about the work for the Campaign for Nuclear Disarmament.

– Read Gar Alperovitz’s 1985 article in the Bulletin of the Atomic Scientists. Also see his book Atomic Diplomacy: Hiroshima and Postdam.