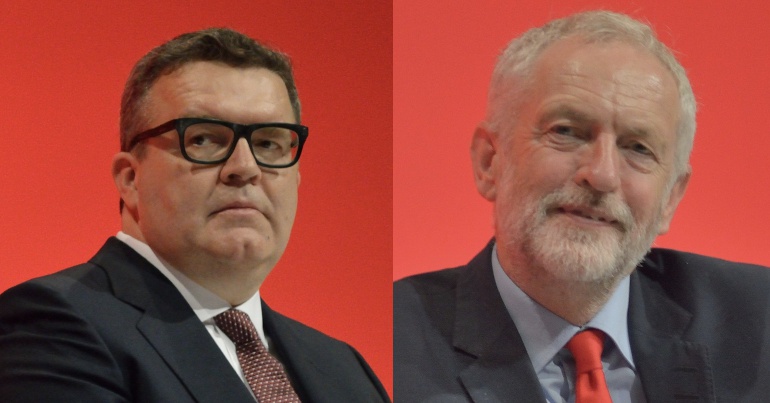 On 4 August, Labour deputy Tom Watson broke ranks to criticise Jeremy Corbyn in the Observer. So on 5 August, thousands stood in solidarity with Corbyn and a “ResignWatson” hashtag went viral.

It sometimes feels like people have been calling for me to stand down from day one but I never, ever thought I’d be facing demands to #resignwatson for standing up for people who are facing prejudice and hate.

But thousands challenged his apparent support “for people who are facing prejudice and hate”.

Amid a growing row about antisemitism in the Labour Party, Corbyn made a clear statement on 3 August. He said that antisemitic views “have no place in the Labour party”. He also said that, even if this only exists in “0.1 per cent” of the Labour membership, “one is too many”. And he went further:

Our party must never be a home for such people, and never will be. People who dish out antisemitic poison need to understand: you do not do it in my name. You are not my supporters and have no place in our movement.

But rather than rallying behind this statement, Watson told the Observer that Labour would “disappear into a vortex of eternal shame and embarrassment”. He called for an immediate end to disciplinary action against Margaret Hodge and Ian Austin. Watson also demanded that Labour should adopt the full International Holocaust Remembrance Alliance (IHRA) definition and examples of antisemitism, saying:

I have made no secret of the fact that… we should adopt the full IHRA definition and should do it without delay.

But Corbyn has actually only challenged one example in the IHRA. As he explained:

Our actual differences are in fact very small – they really amount to half of one example out of 11, touching on free speech in relation to Israel. It is unfortunately the case that this particular example, dealing with Israel and racism, has sometimes been used by those wanting to restrict criticism of Israel that is not antisemitic.

Watson’s statement did nothing to support Corbyn. So thousands stood in solidarity and openly challenged Watson.

And in response to Watson’s tweet, people were swift to explain why they thought he should resign:

Let’s get this right @tom_watson

We *all* stand against prejudice and hate unconditionally.

But we are saying #ResignWatson because of your continued duplicity. You simply can’t be trusted. Just go.

Many pointed out that criticism of Corbyn is damaging to Labour at a critical time:

If you listen carefully, you can hear the people sing. I voted for you Tom, however after attacking our democratically elected party leader, you've put your own political gain over helping Labour drive forward to establishing a government that govern for the many. #ResignWatson

Many others, meanwhile, took the time to point out that supporting Palestine does not make people antisemitic:

Tom, you know I like you and I’m not part of Labour. Sincere question about the missing example you oppose: I believe Israel is an apartheid state committing brutal oppression, illegal occupation and atrocities including mass murder upon Palestinians. Am I an antisemite?

And these key points were shared by many others:

We’d be in power by now! Yet we’re being held back & millions are suffering as a consequence. For heavens sake, #ResignWatson. pic.twitter.com/AbifSnR7Sh

I will never forgive or forget Tom Watson's Machiavellian role in the 2016 #ChickenCoup, when one-by-one Blairite MPs appeared on the BBC slagging off Jeremy Corbyn and demanding his resignation. I believe that treacherous act ultimately cost Labour the 2017 GE. #ResignWatson

Here’s a video of Tom Watson asking Corbyn to resign after the infamous coup. Surely there isn’t a problem with us asking for #ResignWatson since he says members mandates matter? pic.twitter.com/IQo2sz04Gf

Some pointed out that one of the IHRA authors supports Corbyn’s caution:

The very author of the IHRA definition was appalled to witness his loose words used to unfairly silence debate on Palestine (another group subject to prejudice). He said it must be changed to avoid this. Tom Watson is ashamed the NEC listened to him? #ResignWatson pic.twitter.com/TucN1M9z0o

But as the so-called ‘Twitterstorm’ gathered pace, several other points were raised about Watson.

Move along, nothing to see here…

Many people pointed out that Watson has received large donations from Sir Trevor Chinn.

But you are receiving large donations from Sir Trevor Chinn..massive pro Israel lobbyist. How can you and John Mann square these donations? Corbyn has been smeared and you and other Labour MPs have sadly been bought by lobbyists like US politicians.

Chinn is vice president of the Jewish Leadership Council, which has openly criticised Corbyn. He also supported [paywall] Tony Blair. Since 2017, Chinn has donated £20,000 to Watson.

Other tweets suggested Watson was also funded by Max Mosley, Labour Friends of Israel and Sir David Garrad. As The Canary previously reported, Mosley is the son of Oswald, founder of the British Union of Fascists (BUF) and has, so far, donated £500,000 to Watson.

Some posed Watson a simple question about these donations:

If I give you £20,000 will you lobby for Palestine? #ResignWatson https://t.co/qKnCFdfeWT

And others questioned his previous praise for Mosley:

As attacks and criticism continue in the mainstream media, thousands have taken to social media in the past week to support Corbyn. Watson’s response suggests he really doesn’t ‘get’ how strong this solidarity is.

The voice of the many is roaring loud and it shows no sign of stopping.