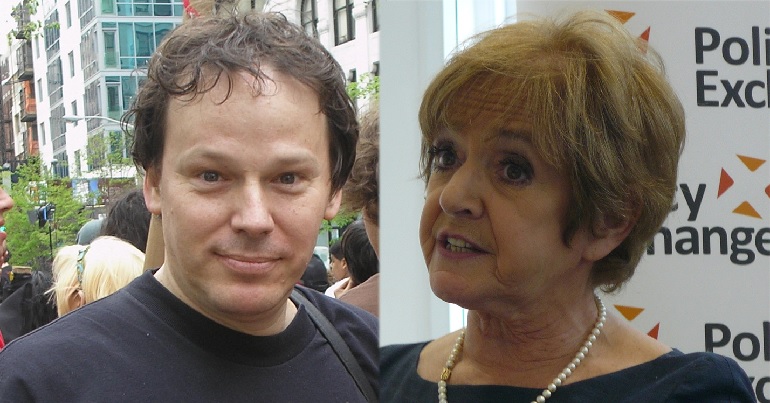 This week, Labour MP Margaret Hodge accused Jeremy Corbyn – her party’s veteran anti-racist leader – of being a racist. But as she doubled down on her smear, one Jewish professor explained exactly why her behaviour was so “vile”.

Speaking as a Jew, let me say I consider your behavior so vile as to itself be anti-Semitic, since crying wolf like this for cynical political advantage means when the real anti-Semites start mobilizing no one will take the warnings seriously

Other Jewish people agreed with Graeber that Hodge’s “appalling” behaviour was actually undermining the fight against racism:

I am Jewish. My mother, a Holocaust survivor, lost over 30 members of her family in Nazi death camps. I AM MOST CERTAINLY NOT Margaret Hodge. I find her behaviour appalling. It undermines the struggle against all forms of racism, including antisemitism & Islamophobia https://t.co/Z4AzdBCdd3

Simple: criticism of Israel isn’t the same as antisemitism

Labour’s National Executive Committee (NEC) approved the International Holocaust Remembrance Alliance’s (IHRA) definition of antisemitism on 17 July. But the party adopted a version of the IHRA’s definition without examples that could gag legitimate criticism of Israel. And 36 Jewish groups worldwide spoke out simultaneously to express the same reservations about the IHRA definition.

Jewish Voice for Labour, meanwhile, has insisted that:

the NEC code should be welcomed as a principled and useful contribution towards providing much needed clarity both about what is truly antisemitic, and what constitutes legitimate political discourse about Israel and Palestine.

Others have pointed out that, while Labour is taking clear steps to ensure that discrimination has no place within its ranks, the ruling Conservative Party’s measures to stamp out Islamophobia and “endemic racism” in its own ranks are woeful:

Labour’s rulebook makes three references to antisemitism, whereas the current Conservative party code of conduct does not use the word once.

I’m assuming the entire media, the Board of Deputies, all those anti-racist Tory MPs (😂) and the Labour Right will all arise in vigorous condemnation of this now right?

What exactly does Hodge love so much about Israel?

In the very same week that Hodge has accused her party leader of racism for refusing to stifle criticism of Israel, the Israeli state has passed a law that critics say “officially legalizes apartheid”. Israel has also faced allegations of war crimes in both the occupied West Bank and Gaza in recent months.

An internet search for news about Hodge and Israel’s now infamous ‘nation-state law’ appears to bring up no results, suggesting she’s made no public comment on the highly controversial legislation. In fact, the top result is an article by Middle East Eye editor-in-chief David Hearst, in which he asks how Hodge and other Labour MPs can possibly stand by Israel after the passing of the law. Hearst says:

The Nation State Law defined sovereignty and democratic self-rule as the exclusive or “unique” right of Jews, wherever they live in the world.

So, according to this constitution, Hodge, who represents Barking, now has – by law – a right as a British Jew that overrides any right a Palestinian has in his or her own land. Ethnic and religious discrimination has become a constitutional value in the State of Israel. Is this Labour Party policy?

What exactly about the state of Israel do you support, Margaret Hodge?

And with Hodge making such a fuss about the Labour leadership’s refusal to stifle criticism of Israel, that’s a good question. Because her silence about Israeli apartheid, occupation, and human rights abuses seems to suggest that her ultimate aim is not to end racism, but to defend Israeli crimes and to undermine Corbyn at all costs.

– Campaign with Free Speech on Israel. And share your concerns about Israel’s crimes with your national or local politicians.