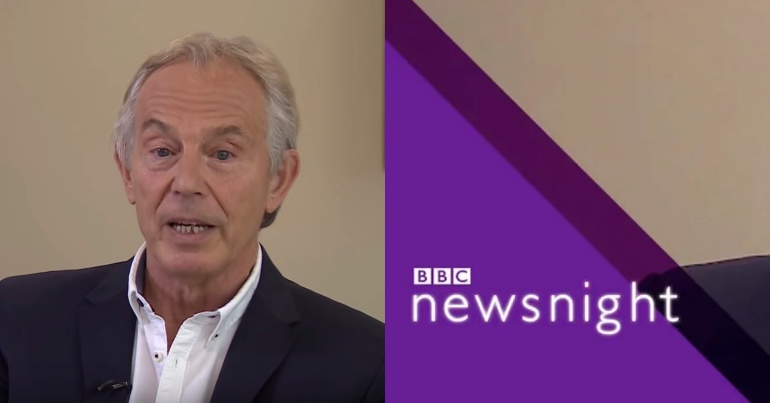 The Conservative government is plummeting further into Brexit chaos. Meanwhile, Labour’s gone up five points in opinion polls. But when BBC Newsnight interviewed Tony Blair on 19 July, the former leader used the opportunity to make yet more damning comments about Jeremy Corbyn.

Putting the boot in

Blair offered ‘expert’ advice about Brexit to host Evan Davis. He also defended Theresa May, saying that she was approaching Brexit from a “well-intentioned viewpoint”. But when it came to speaking about the Labour leader, he took a very different tack.

Blair suggested that “traditional party structures” were no longer relevant. He said Labour was now “unreconstructed leftist”, and that this would leave many people feeling “unrepresented”. But this seems entirely at odds with the latest opinion polls that put Labour ahead by five points; a fact that some viewers commented on:

When Davis asked why Blair stayed in Labour, he openly discussed his “disagreement with the Labour leadership” and said he didn’t think their policies were “actually progressive”.

And he didn’t stop there.

If there was any confusion about where the former prime minister’s loyalties now lie, he settled the argument. When pushed by Davies to explain whether he would rather work with Corbyn or Conservatives like Anna Soubry and Dominic Grieve, he said:

Blair didn’t deny that he has more in common with Conservatives than his own party, nor did he rule out working with them in the future.

It didn’t take long for people to react:

Bullshit masterclass from Blair on #newsnight

The only thing I'm clearer about it is that he agrees with Dominic Grieve and Anna Soubry more than the mainstream of his own party.

Throughout the ten minute interview, Blair’s comments about Corbyn sounded as though they’d been lifted straight from the right-wing press or Tory HQ. And talking about a “thesis of betrayal” not only did he seem to equate Corbyn’s popularity with voters for Donald Trump’s rise to power, he opened a can of worms about politicians lying; without the slightest shred of irony:

Time he did one

Many people can’t and won’t ever forget that Blair ‘led’ the UK into the invasion of Iraq. It was a war that killed hundreds of thousands of people; that the high court ruled was “unnecessary”; and that both the US and the UK knew could lead to a rise in terrorism (as it did). This is the same man that many think should be prosecuted as a war criminal.

So many people were highly critical that he was invited onto Newsnight.

For a start, Blair is a deeply unpopular former leader:

Last night #Newsnight normalised dangerous far-right politics, yet again. Tonight they are inviting on one of the most disrespected & discredited figures in British society. It is not journalism, it is sensationalism. They should be ashamed. pic.twitter.com/EZ0ZOmN0ZZ

Many of us have no good memories of his time in office:

Personally I'm of an age that I only remember Tony Blair for one thing pic.twitter.com/rkBuiGcj2z

Turned on #Newsnight for the first time in months only to be greeted by the gurning face of Tony Blair. And no surprises, he’s slagging off Corbyn and the left. Why is he still being given airtime to haunt us like the ghost of Christmas past? pic.twitter.com/0zc7IfmaO6

And for many, Blair’s denial about politicians being “liars and cheats” was a step too far:

Tony Blair is apparently not a liar…..Tell that to the million dead Iraqi's you warmongering lying bastard. #newsnight

With a government in turmoil, Blair keeps cropping up on the BBC. But despite the Beeb’s best efforts to pretend otherwise, he doesn’t represent ‘the many’. And it really is time he did one.