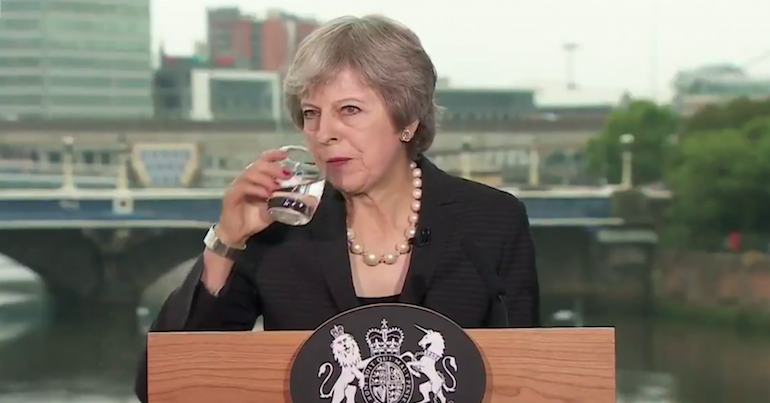 Theresa May has redefined ‘rock-bottom’ while attempting to “cover up” the disgrace that could finish her government. She is accused of telling ‘blatant untruths’ to make up for the fact that her party seemingly swindled a new mother to win Brexit votes.

The Conservatives broke an agreement with MP Jo Swinson who was absent on maternity leave. That gave themselves an extra vote in two crucial Brexit showdowns on 17 July.

MPs who are unable to vote can ask to be ‘paired’ with MPs from another party, who then also agree to miss the vote to compensate. Swinson had been paired with Conservative chair Brandon Lewis. But instead of refraining from voting, Lewis cast his vote with the government.

Since then, the Conservatives have essentially admitted that the manoeuvre was not a “mistake”, as the prime minister, the Conservative chief whip and Tory chair Lewis have claimed. While only Lewis cooperated, whip Julian Smith actually asked several MPs to break pairing rules and add extra votes for the Conservatives, according to the Guardian.

But, on 20 July, May actually doubled down on her apparent attempt at a cover up:

"There was an honest mistake made" @theresa_may when asked about Brandon Lewis, chief whip and pairing #bbcdp pic.twitter.com/uO6Or8gRTa

There was an honest mistake made, for which the chief whip and indeed Brandon Lewis have both apologised to the member concerned.

We take pairing very seriously and we recognise its value to parliament. We will continue to guarantee a pair for MPs who are currently pregnant or who have a newborn baby.

It is unbelievable that the prime minister has repeated the desperate and blatantly untrue excuses made by her party chair and chief whip.

The Tories’ story is changing by the minute as they desperately scramble to cover up their appalling actions.

May’s government is on the ropes after suffering 10 ministerial resignations all in the space of last week. If Lewis and Smith have to go, it’s unclear whether her premiership can survive. Especially when May is currently relying on the chief whip to discipline MPs into bringing through vital Brexit legislation. That’s in the face of rebellions on both the Leave and Remain sides of the party, on the back of a very slim working majority.

There is also speculation that May herself knew of the order to break pairing arrangements.

The Conservative government will apparently go to desperate lengths to avoid a general election. That’s because a public vote could lead to enemy number one: a Corbyn premiership.

Now, May’s party seems prepared to screw over a woman on maternity leave and then cover it up, while the home secretary makes possibly libellous claims about the Labour leader.

On the other hand, anyone concerned about the state of the country would be foolish to waste this opportunity for a genuinely progressive government. We need a general election, now.