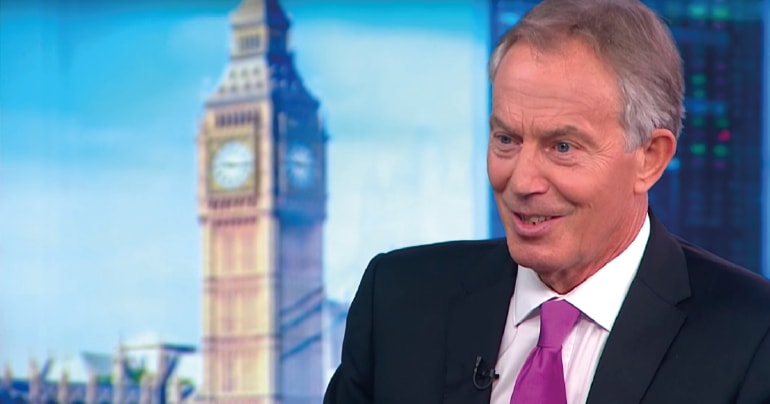 Tony Blair is an incredibly unpopular public figure. Despite that, he’s once more spoken out on Brexit.

Some Remainers still cling to the idea that Blair will miraculously become influential again. Others are calling Blair’s endorsement what it is – a kiss of death.

Is Tony Blair against Brexit? Yes
Is Brexit bad for the people of this country? Yes
Is Tony Blair going to convince anti-establishment Brexit voters that Brexit is bad for them? Not a chance in hell.
You may like Tony Blair, But are we just here to talk to ourselves?

Always bemused by those who portray a negative view of Tony Blair as extreme or fringe opinion.

A negative view of Blair is one of the last unifying things we have as a nation. Remainer, Leave, Labour, Tory, young, old, middle-class, working-class: everyone is opposed to him. pic.twitter.com/vnFy3eVjuQ

Femi Oluwole, the co-founder of anti-Brexit group Our Future, Our Choice, has spoken about Blair’s toxicity. He points out that he was horrified by the Iraq War, but goes on to say: 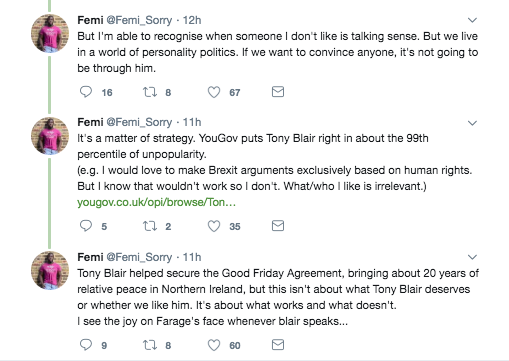 Oluwole may be feeling like he’s banging his head against a brick wall, as many responses seemed to ignore his point completely:

Some missed the point even when the point was repeatedly pointed out to them: 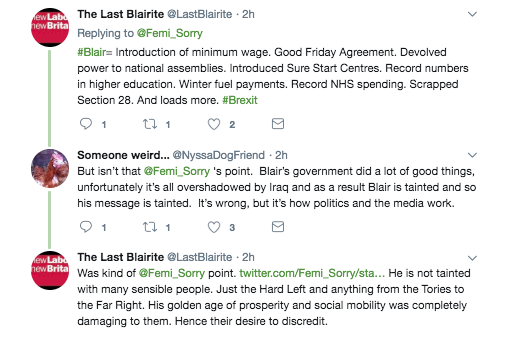 While others – without a shred of irony – assured Oluwole that having Blair fight for Remain was only as bad as having Boris Johnson fight for Brexit:

Many did actually agree that Blair isn’t helping, though: 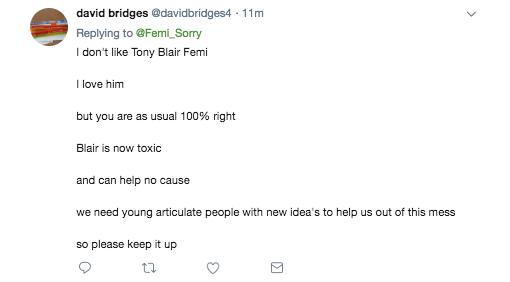 Some even offered striking analysis of how the Blair problem runs deeper than just his unpopularity: 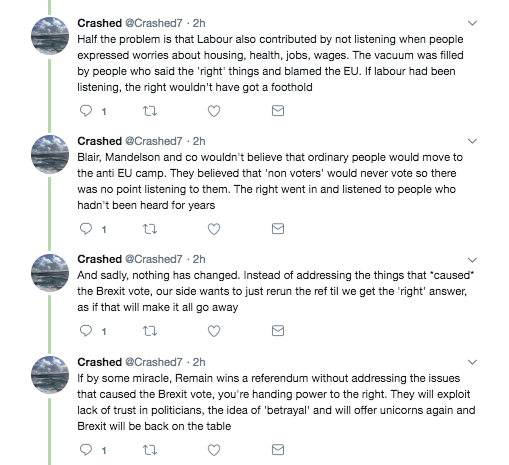 ‘Our Future, Our Choice’

Ironically, Our Future, Our Choice is supported by Blair-linked politicians like Alastair Campbell and Lord Adonis. It’s also been criticised for its links to politicians who are far from progressive:

And you now share an office at Millbank with an organisation whose patrons include Lord Heseltine, Ashdown and Ken Clarke – and whose director is ex Tory Stephen Dorrell.

Remind me why you incessantly attack Labour again? 🤔🤔 https://t.co/wnUC62yTdY

. @OFOCBrexit is pure astroturf. They share an office with organisations funded and backed by big business and former donors to the Lib Dems and the Tories.

They are not progressives. Meanwhile the 70% who want a soft brexit are represented only by @jeremycorbyn & @Keir_Starmer pic.twitter.com/nlfMMcJf21

These latest comments from Oluwole, and the replies he received, show the problem that the Remain movement has. It’s striving to be a voice for the future, but it seems paradoxically rooted in the past. Namely in 2002 – the point just before the New Labour wave crashed.

The Remain movement is notorious for repeating the mistakes that probably helped Brexit happen in the first place. Promoting unpopular voices like Tony Blair is one such mistake. Others include pretending that everything was fine before the EU Referendum (which it probably was if you were well off):

The sad thing is if this country hadn’t been conned by Brextremists we’d be a very prosperous country now and respected around the world.

Another is claiming to be looking out for working class people while venerating Tories who routinely vote to harm the most marginalised people in society:

I already had so much admiration and respect for Anna Soubry before today but that’s now magnified x100 https://t.co/rNOYNn8cJU

Activists like Oluwole clearly realise that Remain has a messaging problem. The question is whether they can they convince enough Remainers to make a difference.