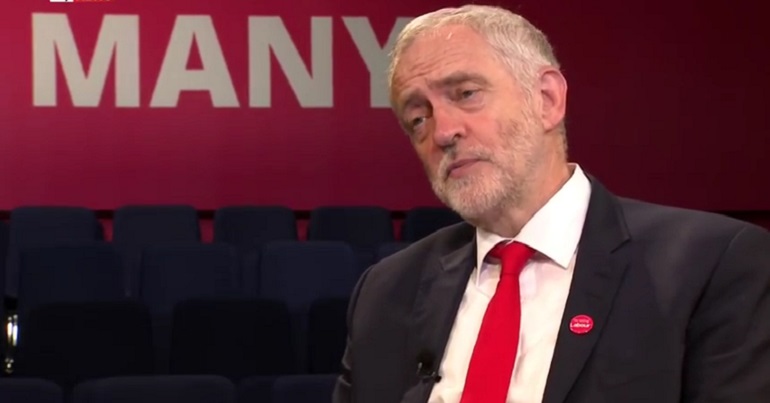 In 2010, Jeremy Corbyn hosted an event with Jewish holocaust survivor Hajo Meyer, which was disrupted by Zionist Federation members. Their behaviour was deemed to be so beyond the pale they were reportedly escorted out by the police. However, the corporate press [paywall] has completely ignored these reports, suggesting an anti-Corbyn and pro-Zionist media bias.

The gatecrashers from hell

The event, Never Again for Anyone, was part of a series organised to discuss “The Misuse of the Holocaust for Political Purposes”.

I was fortunate to attend the packed meeting on “Never Again: For Anyone” at Parliament in Portcullis House on 27 Jan 10, on Holocaust Memorial Day….

Most of the Zionists clearly came to silence the Holocaust survivor, Dr Meyer. As soon as he started talking they shouted at him. The first to shout was Jonathan Hoffman. He was also the first to be escorted out by police. This was after Hoffman’s repeated shouting at the 85 year old Holocaust survivor, preventing Meyer from giving his talk. The police gave him a number of warnings.

A couple more Zionists were eventually escorted out by police, before Dr Meyer was able to complete his talk. There were other Zionists who also joined in the shameful and disruptive conduct of shouting at the speaker.

They tried to silence the Holocaust survivor from speaking about his memories and lessons from the Holocaust.

Throughout the tour, Dr Meyer received standing ovations – many hearing for the first time important truths about Israel’s occupation of Palestine.

The meeting Never Again – For Anyone was a coming together of many communities which have faced dehumanisation, racism and genocide. Speakers were Armenian, Bangladeshi, Irish, Native American, Roma, Rwandan, Tamil, as well as people with disabilities, and a speaker on the Slave Trade from Africa to the Americas and the revolution which ended slavery in Haiti.

Vice chair of the pro-Zionist Labour Friends of Israel Louise Ellman MP recently spoke to BBC Newsnight about the event.

She said she was “disturbed” to hear that Jeremy Corbyn hosted this event during which Israel was compared to Nazis.

Louise Ellman MP says she is “exceedingly disturbed” to hear the Times report that Jeremy Corbyn hosted an event in 2010 which likened Israel to the Nazis.@LouiseEllman | #newsnight pic.twitter.com/RXGBNFwFuP

What Ellman didn’t say was that she herself was at the event, along with, according to Kahn:

Jerry Lewis [Vice President, Board of Deputies] and Jonathan Hoffman [Co-Vice Chair of the Zionist Federation].

But Corbyn ultimately released a statement in which he said views were expressed at the Meyer event that he did not “accept or condone”.

By his apology and attack on two advocates of Palestinian freedom i.e. opponents of the murderous state which massacres and dispossesses them, Corbyn has only emboldened those who defend every Israeli crime and work to silence opponents of the crimes against humanity carried out by the State of Israel against the Palestinian people. They will never be placated because they hate the idea of Corbyn within reach of 10 Downing Street where he might challenge the alliance with Israel.

The coverage of Corbyn’s leadership by the corporate press has led some people to organise a protest outside the BBC from 1pm on 7 August: 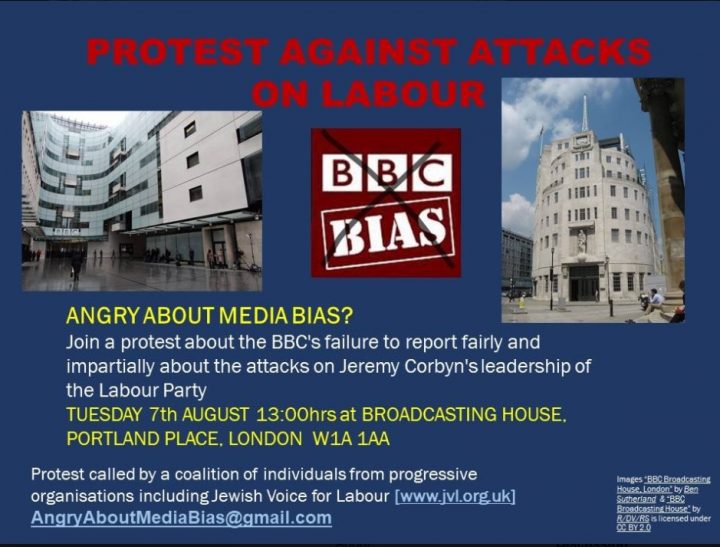 If those who support his policies don’t push back against false claims of antisemitism, the alternative he offers may well be over before it begins.

– Read more from the International Jewish Anti-Zionist Network UK; and watch Professor Haidar Eid’s contribution to the 2010 event via video link from Gaza.

– Attend the protest outside the BBC on Tuesday 7 August.