As his government falls apart, Johnson chooses to meet an alleged war criminal - The Canary 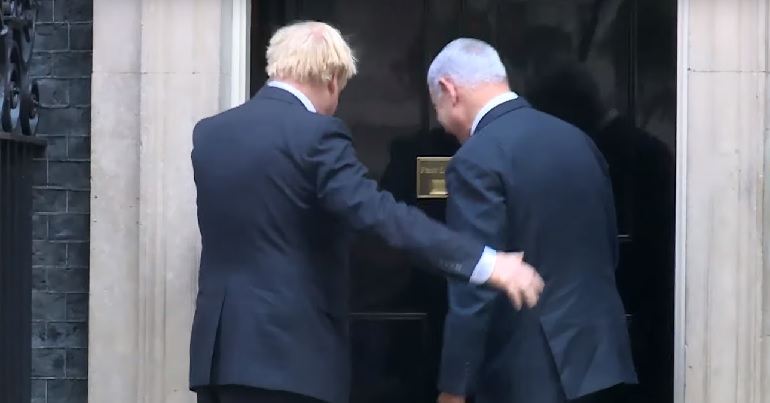 Boris Johnson’s government is currently in freefall. And while some politicians may see this as the worst possible time to embrace further controversy, Johnson appears to be one of controversy’s biggest fans. So he decided this was the perfect time to meet an alleged war criminal.

“Not enough shame on the nation” already

Many people around the world consider Netanyahu to be a war criminal. He has been Israel’s prime minister since 2009. And he has overseen numerous crimes while in charge.

Both human rights groups and the UN found credible evidence of war crimes during Israel’s 2014 war on Gaza, which reportedly killed at least 1,483 Palestinian civilians. And earlier this year, a UN report said that Israeli murders of Palestinian protesters in 2018 “may constitute war crimes or crimes against humanity”. The Israeli state has so far committed its crimes with relative impunity.

With the above in mind, numerous commentators thought Johnson’s meeting with Netanyahu was telling:

There's not enough shame on the nation right now, so Johnson thought he was a great idea to receive wannabe dictator Netanyahu..
Don't forget to wipe the blood from your hands after shaking Netanyahu's ones, Boris. https://t.co/dXZkRcrzJp

Just in case you were wondering where Boris Johnson stands on Israel, in the middle of the greatest constitutional crisis facing the country, war criminal Netanyahu who has the blood of thousands of Palestinians on his hands is due to be welcomed to London today!! https://t.co/02twYbfNS8

Netanyahu is the only person so awful that he can almost make Boris look good in comparison.

Antisemitism and the right

Tweeting about the meeting, Netanyahu mentioned Johnson’s supposed “stance against antisemitism”. But the truth is that the Conservative Party continues to struggle with allegations of antisemitism (even if they don’t get much attention in the mainstream media). Tory ties with antisemitic, far-right parties in Europe, meanwhile, have also been a cause for serious concern.

In particular, the Conservatives have been close to Hungarian PM Viktor Orbán. And when the EU sought to sanction Orbán regarding accusations of antisemitism, Islamophobia, and attacking press freedoms, the Conservative Party joined far-right politicians in voting that Orbán didn’t pose a “clear risk of a serious breach of the EU founding values”. Labour leader Jeremy Corbyn condemned Orbán at the time, saying Tory support for him had “brought shame on the UK”.

Boris Johnson, meanwhile, congratulated Orbán on his 2018 election win. And a month later, he tweeted a pally picture with Hungary’s foreign minister. These appear to be Johnson’s only mentions of Orbán and Hungary on Twitter.

* = Except when the anti-Semites are extremely right-wing, in which case "congratulations and we look forward to working with you".

As Netanyahu visited Johnson, meanwhile, people on Twitter pointed out that the Israeli PM has also been very friendly with Orbán’s antisemitic regime:

So Johnson's distraction activity tomorrow is a visit from Netanyahu. A coming together of closed minds. Apart from both being dedicated to no progress or solutions for Palestinians, they both love and admire the antisemite Victor Orban. Depressing.

Johnson has few friends at the moment but can be sure of friendship from racist #Netanyahu Both admire antisemite & islamophobe Orban in Hungary. Stand against racism here and everywhere. Please get along if you can 12:00 Today 5.9.19 Downing Street pic.twitter.com/ggHGkYvTKv

And it’s not just Orbán. Netanyahu’s hard-right government has befriended the far right in Italy, Ukraine, Poland, Germany, and beyond – many of which have fascist and antisemitic pasts (and presents). This is normal, though. Because Israel has both a historical and recent record of supporting far-right governments around the world while receiving their support in return.

In short, support for the Israeli government does not automatically translate to immunity from being antisemitic (Netanyahu’s close friend Donald Trump proved that recently).

“Stand against racism here and everywhere”

Johnson may have thought welcoming alleged war criminal Netanyahu to Downing Street was a good move. But for many people, it will simply cement the idea that he has no shame and no moral compass – a case that becomes stronger and stronger each day.