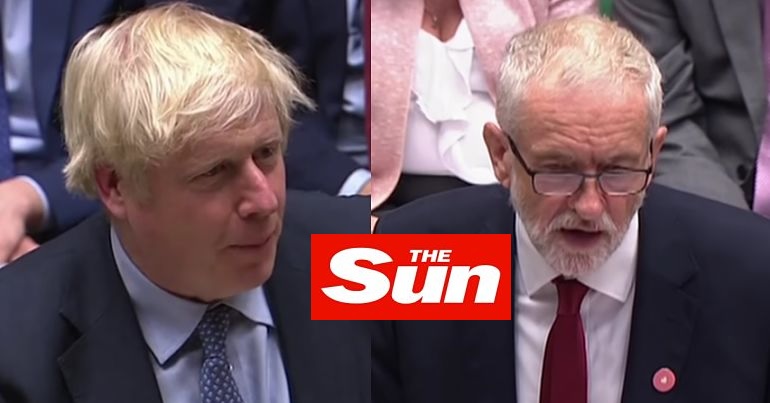 The Sun had an interesting take on Boris Johnson’s week of political carnage. After the PM was defeated on numerous counts in the Commons, gave a disastrous performance at Prime Minister’s Questions (PMQs) and lost his government its majority in parliament, the tabloid ‘reported’ this to its readers:

I mean at least Rupert Murdoch takes his work for Trump seriously. He’s pumped billions into Fox News. Whereas this is just such poundshop propaganda. Terrible photoshop, dad joke, crap pun…The 80s are calling @thesun. And they want their Sinclair ZX Spectrum back pic.twitter.com/0npr9Yq2ae

But the Sun didn’t share this important ‘news’ with all its readers. That sorry excuse for reporting is what it offered the English. Scottish people, meanwhile, got something entirely different.

Played for a fool

The discrepancy between what Rupert Murdoch’s press told its readers in the two countries was glaring:

As discussed today, it's hard not to see this as evidence that @tonygallagher & Rupert Murdoch think that Scots are too savvy to fall for the crap they serve up every day to English readers. https://t.co/3OZv1aujZK

So according to the Scottish Sun, “floppy” Johnson failed to secure the general election he wanted. But its English counterpart says “dangerous chicken” Jeremy Corbyn is too “cowardly” to give Johnson a general election. It puts the blame for the lack of an election at a different leader’s feet, depending on the readers the Sun is selling it to.

Given the very clear missteps in Johnson’s strategy, and the dramatic fallout of that, it’s blatantly obvious that the Scottish headline is more accurate. So as LBC host James O’Brien says, it seems the Sun is serving up “crap” to its English readers.

He wasn’t the only one to notice either:

How Murdoch plays you.

Sun in Scotland…. depicts Johnson as a limp dicked loser. In England all the ire is aimed at Corbyn.

You're still falling for it Britain? pic.twitter.com/xYIsJo1Qfp

The Sun there, clearly coming out against Johnson. No, Corbyn. Johnson. Corbyn… #SchrodingersSun pic.twitter.com/x8Sdz7odg8

This is how the posh boys who edit The Sun treat their readers – like fools. The Scottish version tells the truth, the English version is propaganda, cooked up with their mates in Downing Street. It should go on the Tory election expenses… pic.twitter.com/YqMLLXgojD

Bolstering the argument that the Sun ‘cooks up’ its English content with its ‘mates in Downing Street’, the tabloid pulled a further stunt on 5 September. After Johnson called Corbyn a “big girl’s blouse” during PMQs, a Sun reporter presented one to Corbyn. Purely by coincidence, of course.

A reporter from the Sun has taken "a pink floral blouse" to Jeremy Corbyn's house after Boris Johnson called him "a great big girl's blouse", because we're still in a world in which being "womanly" is a huge insult and a fatal flaw
(this via @PA) pic.twitter.com/ZN78XMhO5Y

But while the Sun cynically changes its tune at will on who the ‘loser’ is in our politics, there’s one sure fire loser in this game playing. The English people. Media outlets are meant to hold politicians and the powerful to account, on behalf of their readers. They’re not meant to manipulate readers for the good of politicians.

The Sun is not only insulting its readers with this ‘crap’; it’s also damaging their ability to make informed decisions. That’s one reason, among many, why no one should buy the Sun.