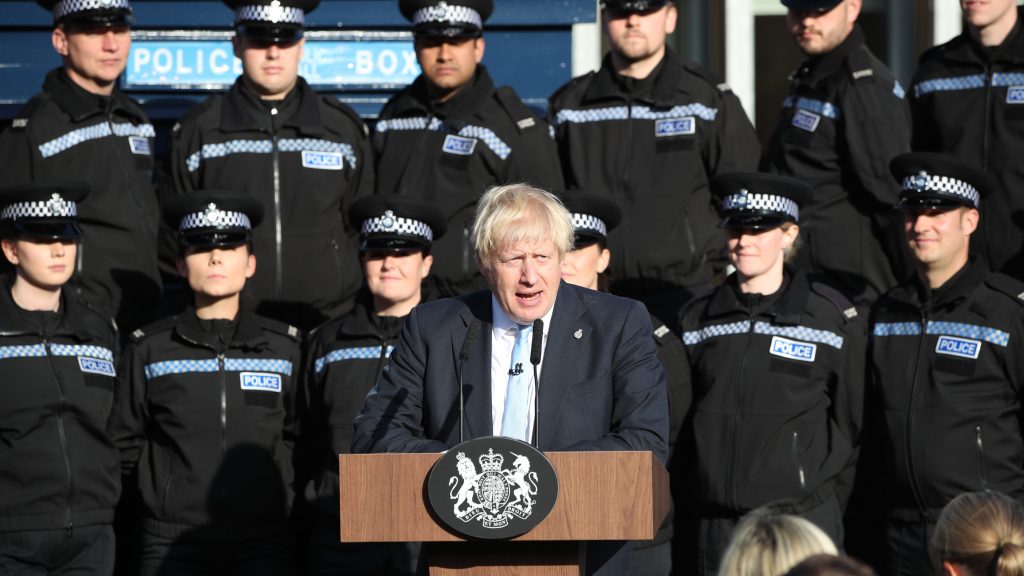 On 5 September, Boris Johnson launched a Trumpian political stunt in West Yorkshire. And critics accused him of ‘abusing’ the position of the police in the process.

About 35 student officers stood in lines behind Johnson as he gave a speech at West Yorkshire Police’s operations and training complex in Wakefield. The officers were standing behind his lectern, in front of an old-style police box, for at least 20 minutes before the speech began.

But the troubled PM faced criticism for using student officers as a backdrop for his political speech. Wakefield MP Mary Creagh, for example, said she was “very unhappy” about Johnson using the cadets as “wallpaper for [his] party political stunt”. And she wasn’t the only one with something to say:

UPDATE: West Yorkshire Police & Crime Commissioner Mark Burns-Williamson (Labour) tells me Boris Johnson has "abused" the police force's position & says the officers should not have been used in this way, for a "political speech about Brexit". https://t.co/mytmAvrvIk

Burns-Williamson says he wasn't consulted about the details of Boris Johnson visit & has contacted John Robins, @WestYorksPolice chief constable, for an explanation.

This is an abuse of power by Boris Johnson, making so many police stop their training and work to be part of his political stunt. They have a job to do here in West Yorks, and they train and work hard for the whole community – completely unacceptable to use them in this way https://t.co/9J1iImeiSc

Our brilliant cadets in #Yorkshire being used as Boris Johnson’s extras in his creepy B Movie, ploughing on even after a young female cadet became unwell? Not good. @WestYorksOPCC @WestYorksPolice https://t.co/fj3d0fp8kO

Disgrace that the @WestYorksPolice set aside political impartiality and allowed their recruits to be exploited as part of Johnson's party political broadcast.

The people of West Yorkshire and the UK deserve better from both.#Police pic.twitter.com/j0GFfNtcsj

Racking my brain to think where Downing St got the idea to have ⁦@BorisJohnson⁩ making political points against backdrop of non political police cadets pic.twitter.com/uQHV5qmz90

“You should be in Brussels negotiating!”

Like a touring pantomime villain, Boris Johnson swept into Wakefield to a chorus of jeers.

As one local person said, “he has got all this money but he never speaks to normal folk”.

You should be in Brussels negotiating!

"You should be in Brussels negotiating!"

Boris Johnson floundering on the campaign trail when faced with the public pic.twitter.com/vfrjcHUMQ4

And the reception in general to the PM’s visit was far from welcoming:

I love this picture. Just look at all the different groups that have united in opposition to our Prime Minister. Not bad for a flash rally on a weekday at 4pm!! Johnson will get this everywhere he goes now. #NotMyPM #BorisJohnsonLies #StopTheBrexitCoup pic.twitter.com/tup9NdOYVa

Looks like Boris Johnson didn’t get the warmest welcome in Wakefield today… pic.twitter.com/HI7zisPFbZ

I feel #PleaseLeaveMyTown is the Johnson hashtag we’ve been waiting for.

Boris Johnson has been so bad at his job so far that he seems to have started his general election campaign already. But in doing so, he’s simply exposing how much he admires authoritarian Trumpian tactics, and just how unpopular he is around the country.