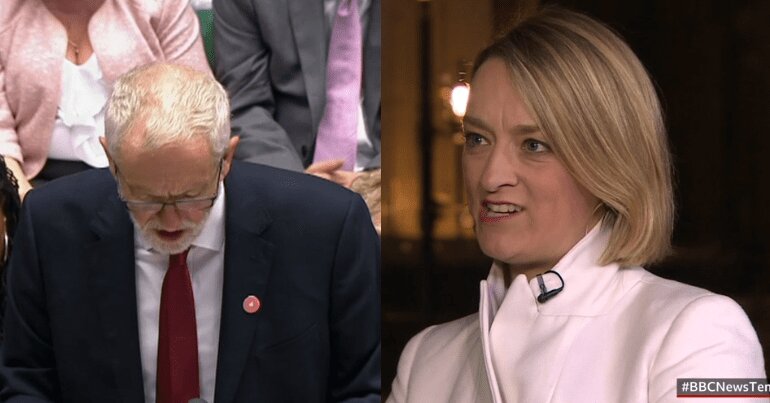 The 4 September edition of BBC News at Ten covered Prime Minister’s Questions (PMQs) in such a way that it was unrecognisable for those who watched the exchange live. Even the chief features writer at the pro-establishment Financial Times, Henry Mance, clocked the obscene bias:

Funny old world – nearly everyone who watched PMQs live thought Boris Johnson was disastrous, but watching the BBC’s 10 o’clock news, you would think he’d won it.

Many people pointed out the significance of this:

It really says something when a senior FT journalist points out that BBC News is misleading the public with its pro-Johnson bias. https://t.co/V0IPPA6DgO

Across all shades of the political spectrum, Johnson’s first performance at PMQs didn’t go down well.

Our Prime Minister, sitting in the House of Commons and using openly homophobic language towards Corbyn, calling him a big girl's blouse, and refusing to apologise for his own racism by deflecting with his diverse cabinet and his apparent ancestors.

Get him the fuck out. #PMQs

Even pro-austerity former Tories appeared to declare the end of the party:

After a pitiful performance in his first #PMQs #BorisJohnson we are now subjected to an embarrassing debut as Chancellor from @sajidjavid no wonder @Conservatives MPs sitting behind them both look so glum. A once great party rendered to an incompetent right wing rump.

So many of Boris Johnson's worst character flaws on display at #PMQs. He's thin skinned and easily riled. He can't cope with a hostile audience that won't laugh at his attempts at jokes. And he tends to wing it rather than put the work in to prepare

My centrist Tory (formerly) voting Dad said "Corbyn made Johnson look like a child at #PMQs today," and I am here for it. 🙌🙌🙌

#PMQs leaves millions of Brits confused, as traditionally questions are followed by some sort of answer.

Boris Johnson malfunctioning all over the place here #PMQs pic.twitter.com/uACxt8KSOZ

But the BBC News at Ten team apparently didn’t get the memo. Because they seemed to cherry-pick the best moments for Johnson and place them next to the worst parts for Corbyn:

Here's how BBC News at 10 covered for Boris Johnson's clusterfuck of a maiden #PMQs.

Clipped the only passable moments for Johnson and placed it next to Corbyn's most benign assertions: pic.twitter.com/IqBqiZfdSm

For example, the BBC amplified Johnson’s line that Corbyn is preventing a general election (rather than trying to ensure Johnson cannot deliver a no-deal Brexit through the backdoor):

There’s only one chlorinated chicken that I can see in this house, and he’s on that bench.

Not looking good for Johnson

At present, Johnson looks trapped and unable to govern despite being prime minister. Given he no longer has a majority, a general election is likely around the corner. On 4 September, Johnson called a motion for one. But Labour says it abstained because Corbyn wants to bring about an election on its own terms, perhaps through a no-confidence vote.

That cannot come soon enough. We need to prevent a damaging no-deal Brexit. But it’s worth noting that it’s only trade policy. Ending austerity, delivering a Green Industrial Revolution, and regulating the financial sector are a must. And only Corbyn’s Labour can achieve these critical aims.