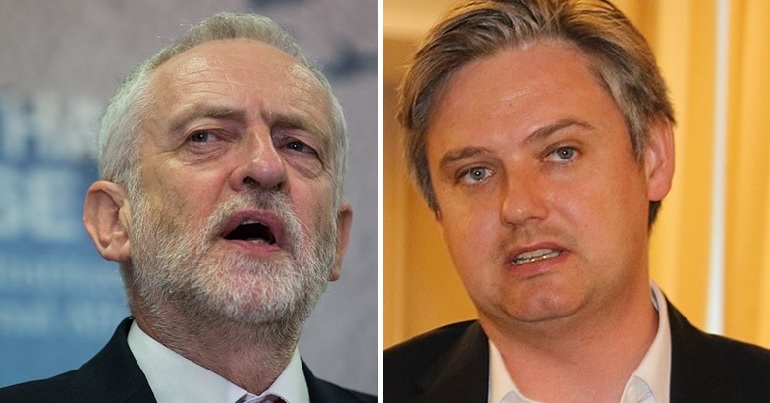 Jeremy Corbyn’s opponents are clearly getting worried. And two right-wingers who had already left Labour a long time ago (for cushy government jobs) have now urged voters to back Boris Johnson’s Conservatives in the coming election. The Canary has already written about Ian Austin, but here’s all you really need to know about the other Corbyn critic – John Woodcock.

A friend to arms dealers and war criminals

Woodcock quit Labour last year, having been highly critical of Corbyn. He’d been sitting as an independent since having the Labour whip withdrawn in April 2018 pending investigation of an allegation of sexual harassment. He denies the allegation.

Woodcock’s actions inside and outside parliament, however, make his opposition to Corbyn’s pro-peace leadership no surprise. Because he has previously:

Tribune editor Ronan Burtenshaw has even called Woodcock a “propagandist” and “hack for the Erdogan regime”:

After Gezi, Erdogan rejected the idea there was widespread discontent with his regime, instead insisting that the protests were incited by 'The Mastermind.' Pro-government TV Haber produced a documentary clarifying what this meant: a conspiracy dating back 3,500 years to Moses.

The idea that a propagandist for the AKP like John Woodcock is a principled opponent of antisemitism is laughable – and could only be entertained by a media completely ignorant or completely cynical. Take your pick.

Already working for the Tories, so not really a surprise

Woodcock announced on 4 November that he wouldn’t stand for re-election as an MP. And just a day later, disgraced Conservative Party home secretary (and proud Thatcherite) Priti Patel appointed him “special envoy for countering violent extremism”. So he’s now working for the Tories – who have supported allies like Saudi Arabia, Turkey and Israel through thick and thin (i.e. in spite of the extreme terror they wage on innocent civilians in Yemen, Kurdistan, and Palestine).

Unsurprisingly, Woodcock has since decided to ‘plead’ with Labour supporters to vote Tory, saying: “The choice to keep Jeremy Corbyn away from Downing Street, to stop him getting his hands on the levers of national security and defence has to be to vote Conservative in this election and that’s what I’ll be doing as well.”

What else do you expect him to do in an election campaign? Where you’re employed by the Tories, you speak on behalf of the Tories.

John McDonnell, on former Labour MP Ian Austin telling people to back Johnson in the #GE2019

Ian Austin is just a Tory — and pretty soon they'll be history. Simples.pic.twitter.com/iPCYnOoDiD

Others also pointed this out:

Breaking News for @SkyNews ex Labour MP’s Ian Austin & John Woodcock BOTH now work for the Conservative Party, they’re not going to sing the praises of Jeremy Corbyn now are they.. they work for the Tories..
Shame on Sky News for not pointing this out!

One big reason why Labour right-wingers have jumped ship and are campaigning against Jeremy Corbyn’s party is foreign policy. Because Corbyn’s leadership marks a massive break from the party that launched the disastrous, illegal invasion of Iraq in 2003. Corbyn has consistently criticised brutal occupations – from Palestine to Kurdistan and from Kashmir to West Papua. He has also firmly condemned the crimes of vicious UK-backed regimes, fought persistently against fascism, protested against apartheid, and won numerous peace prizes.

For all the above and more, warhawks like Woodcock can’t stand Corbyn. No wonder they want people to vote Tory.