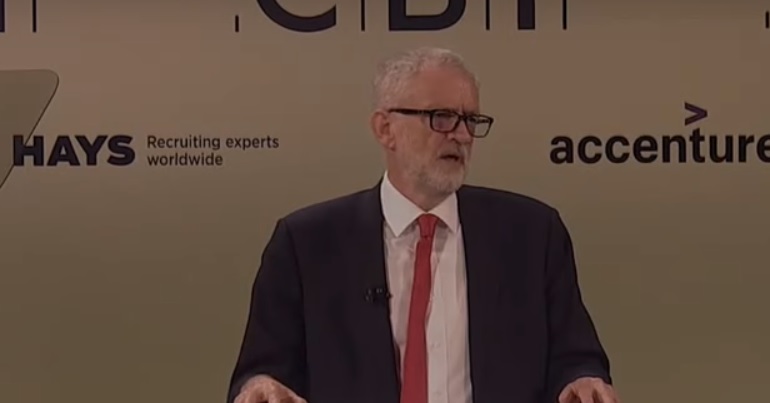 Boris Johnson kicked off his election campaign with an absurd attack on Jeremy Corbyn’s moderate approach to increasing taxes on the richest people in society. Specifically, he compared it to Soviet dictator Joseph Stalin’s murderous persecution of the kulaks.

Corbyn’s own words, however, expose this attack for the utterly ridiculous smear it is.

Since Corbyn became Labour leader, hard-right media outlets have sought to stick images of Stalinist terror in the heads of anyone thinking about criticising capitalism. Corbyn aide Seumas Milne in particular has faced questionable attacks on this front. Johnson’s mention of the kulaks, however, took this a step further.

Despite the Soviet Union’s key role in defeating Nazi terror in the Second World War, numerous left-wing sources have condemned Stalin for his “bloody rule” and use of state terror to consolidate power. And the treatment of the kulaks is particularly damning. The term kulak originally referred to newly-wealthy farmers who emerged from the Russian peasantry in the early 20th century. After the Russian revolution, however, some in power viewed these richer farmers as enemies of progress. And Joseph Stalin ordered a campaign in 1929 to “liquidate” them. The resulting period of repression, disease and mass starvation is estimated to have led to the deaths of anything between 500,000 and five million people, and the deportations of millions more.

Johnson claimed that Labour today targets billionaires “with a relish and a vindictiveness not seen since Stalin persecuted the kulaks”.

Shadow chancellor John McDonnell has made it clear that “in terms of income tax, we’ve said very clearly the top 5% will pay a bit more, 95% of the earners will be protected”. And Corbyn has responded to Johnson’s smear by tweeting: “The nonsense the super-rich will come out with to avoid paying a bit more tax…”

‘Marxist‘ is another term thrown at Corbyn and his allies. But even if they did agree with the theories of major thinker Karl Marx, that is not the same as proclaiming undying love for Stalin. In fact, Marx has received praise in numerous corporate media outlets, such as the New York Times, Rolling Stone, the Independent, and the Financial Times.

As the Tories doubled down on their Stalin smear, one video of Corbyn started circulating on the internet again. And his own words blow absurd Tory smears right into orbit:

This is what #Corbyn actually says about high earners

I don’t have a problem at all with that. Quite the opposite.

If they do become incredibly rich, then I invite them to be happy with their wealth but also to share it a bit by paying their taxes as appropriately so that our public services are there for them – just as much as they’re there for everybody else – so that we don’t have this horribly divided society.

So Corbyn isn’t about to start a wave of Stalinist repression. He’s simply asking the country’s wealthiest people, politely, to pay the appropriate amount of tax so that British society as a whole is happier and healthier.

Rich People have zero to fear from Labour provided they pay their taxes. It is as simple as that. Excellent explanation. pic.twitter.com/pZzRppBNxP

In fact, if anything is ‘Stalinist’, it’s Tory fearmongering about Corbyn and his moderate proposals:

Painting your opponents as ruthless, murderous extremists is a pretty Stalinist tactic. https://t.co/il9WsniLih

No matter what Johnson and his hard-right buddies tell you, Jeremy Corbyn and his party are not violent extremists. Corbyn has won numerous peace prizes, and he simply wants to make Britain a better and fairer place to live. And his own words about wealthy people make that abundantly clear.