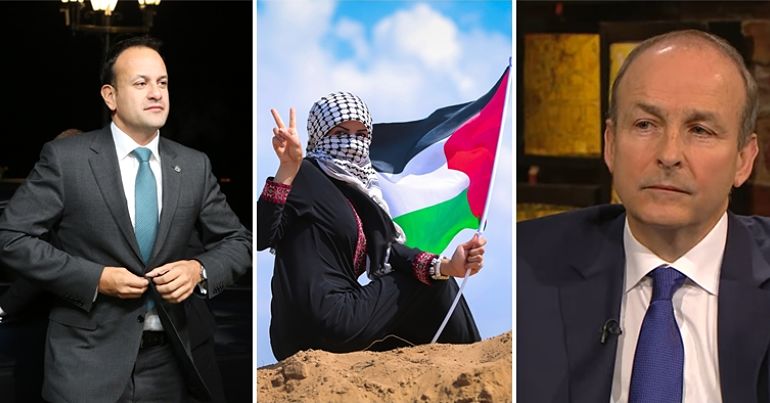 On 8 February 2020, the Irish electorate voted for change. As The Canary reported, the result of that general election seemed to smash the 100-year-old two-party system of the conservative Fianna Fáil (FF) and Fine Gael (FG). The result was a victory of sorts for Sinn Féin (SF) as it doubled its vote but without winning sufficient seats to form a government.

However, SF held government formation talks with other left wing parties. Yet, even with the support of other left wing parties, a SF led coalition would numerically fall short. In any case, this is almost immaterial as the Green Party (GP) threw that dying conservative stranglehold a lifeline. Government formation talks between the GP, FF, and FG are now all but complete.

And not only would this pact return conservative parties to power, it could deal a blow to the Palestinian people. Because the widely supported Control of Economic Activity (Occupied Territories) Bill 2018 that “would ban trade between Ireland and Israel’s illegal settlements in the West Bank”, wasn’t included in the new coalition’s programme for government (PFG).

The programme for government

On 15 June, the three parties unveiled the PFG. It made no reference to the Control of Economic Activity (Occupied Territories) Bill 2018. This bill has already passed seven of the eleven stages a bill must pass before becoming law in Ireland. However, tánaiste (deputy prime minister) Simon Coveney of FG said it “wasn’t implementable”. He explained further saying:

I got pretty detailed advice from the Attorney General in relation to it and couldn’t support it on that basis.

So, I made that case through these discussions as well and the decision was made to take it out of the document. I think that was the right decision.

the Programme for Government agreed by Fine Gael, Fianna Fáil, and the Greens represents an abandonment of the Palestinian people at a time when they need international support more than ever.

The impending annexation of the West Bank and Jordan Valley necessitated Ireland recognising the State of Palestine in the face of such existential danger.

The removal of the Occupied Territories Bill from the Programme before a UN vote on Wednesday was a cynical betrayal of the Palestinians in the name of the outgoing government’s vanity project of getting onto the Security Council.

While at a government level it looks like they’ve already thrown the Palestinian people under the bus, campaigners are still buoyant. Chair of Sadaka Marie Crawley told The Canary:

It is indeed a pity that the Bill is not included within the Programme for Government. But, this does not mean an end to it… It will be back in the Dáil and ultimately, this Bill will succeed. It will succeed because not only it is the right thing to do, but it has the overwhelming support of the Irish people, the political parties and a highly significant majority within the Oireachtas [Irish houses of parliament].

And just because it’s not in the PFG doesn’t mean it has been thrown out. Since it was initiated in the Seanad (the Irish Senate) by senator Frances Black, the bill has received cross party support, with the exception of FG.

And despite opposing trade between Ireland and “illegal settlements in the West bank”, the bill isn’t specific to Palestine or Israel. It could apply to any illegally occupied territory in the world. According to Irish NGO Trócaire:

If enacted, the legislation would apply to territories where there is a clear international legal consensus on the status of the occupation. As it stands, only the occupied Palestinian territories have been confirmed as occupied by the International Court of Justice. However, this Bill allows for other territories to be included so long as there is consensus between the Minister for Foreign Affairs & Trade and both houses of the Oireachtas.

The illegal settlements referred to in the bill are Israeli developments built in the West Bank and outside “Israel’s internationally recognised borders”. Furthermore:

Palestinian communities are forcibly removed from their land in order to make way for these illegal settlements.

Under international criminal law, the transfer by a State of its civilian population into a territory it has militarily occupied is a war crime. Importantly, it is also a crime under Irish law, no matter where in the world it is committed.

Both FF and the GP supported this bill through the Oireachtas while in opposition. So, it remains to be seen if they stay true to this in government.

Sadaka refutes Coveney’s assertion that it isn’t “implementable” and says the analysis from its legal officer:

provides legal detail as to why the Bill is in fact consistent with the exception allowed for in EU law which enables States to unilaterally ban imports of certain goods on grounds of ‘public policy’.

Trade rules are generally uniform across all EU member states. However, exceptions are granted where they can be justified ‘on grounds of public morality, public policy or public security, and the protection of health and life of humans’.

The legal basis of the Bill and its permissibility under EU law are confirmed by two formal legal opinions: the first from Michael Lynn, Senior Counsel in Ireland, and the second from Professor James Crawford of the University of Cambridge, Senior Counsel in the UK and one of the most eminent authorities on international law worldwide. The Bill was also drafted by the Office of the Parliamentary Legal Advisor (OPLA) of the Houses of the Oireachtas.

Omar Barghouti, co-founder of the Boycott, Divestment and Sanctions (BDS) movement for Palestinian rights and recipient of the 2017 Gandhi Peace Award, told The Canary:

Palestinian civil society is inspired by the overwhelming support of the Irish people, trade unions, civil society and parliamentary representatives, for Palestinian rights and for banning trade with Israel’s illegal settlements in the occupied territory.

Omitting this ban from the government program is not only a betrayal of Ireland’s most basic ethical and legal obligations to end complicity in Israel’s serious violations of Palestinian human rights. It contradicts the express will of the people of Ireland, as articulated by absolute majorities in both houses of Parliament.

We trust that Irish defenders of international law and Palestinian rights, like Senator Frances Black, will not stop until this bill passes into law and Ireland revives its glorious history of solidarity with those struggling against oppression and apartheid and building a better future of freedom, justice and equality for all.

It’s difficult to see how an environmentalist political party could get into bed with two parties that have such a poor environmental record. Following the 2016 election, FG formed a minority government with the support of FF through a confidence and supply arrangement. Their agreement had no mention whatsoever of climate change.

In May 2019, the FG-led government declared a ‘climate emergency’. Ireland was only the second country in the world to do so. However, there was little detail in the declaration nor strict guidelines for the government to follow.

In fact the minister for climate action, Richard Bruton, said while there’s a commitment to reduce fossil fuel dependence significantly by 2030, these fuels are “an essential part of the transition”. Then, just over two weeks later, the Irish government issued consent to a Chinese oil company to explore for oil and gas off the south west coast of Ireland.

And in November 2019, caretaker taoiseach Leo Varadkar caused outrage when he said there were “plusses and minuses” to climate change as warmer winters led to “fewer deaths” and the need for “less energy”.

During the 2020 election campaign, the GP rated both FG and FF’s election manifestos poorly on climate action.

It’s not over until…

FF leader Micheál Martin seems confident about convincing his party members to support this deal. The same can’t be said about the GP. Moreover, the GP needs the support of two-thirds of its voting membership.

And some of that membership may still be scarred by its time in government between 2007 and 2011. The GP’s 2007 election manifesto said it would stop US forces using Shannon airport for the war in Iraq. US forces continue to use it to this day. It also failed to have the M3 motorway routed away from an “archaeologically and culturally sensitive” area near the ancient Hill of Tara. The GP changing position on the Lisbon treaty and its decision to remain in government with conservative parties and neo-liberal polices caused some elected party members to resign.

What’s more, other left-wing parties haven’t given up. In May, both People Before Profit (PBP) and SF believed a left-wing government could be formed. That hope could be reignited should FF and GP members fail to support the PFG. So, while current government formation talks are almost complete, there could be an unexpected twist to come. And hopefully one that puts justice for Palestinians back centre stage.