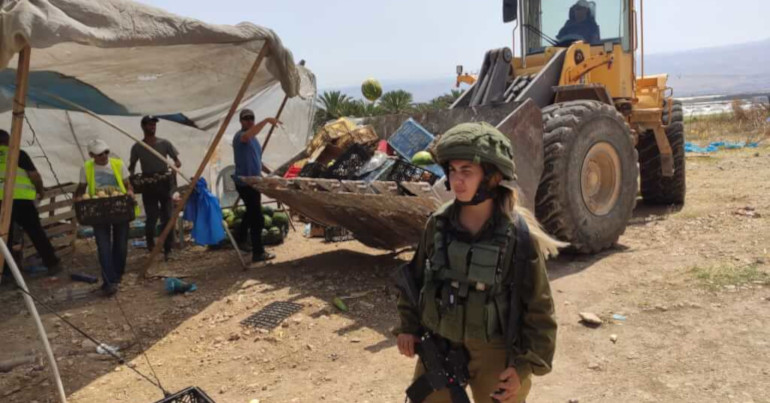 Palestinians in the Jordan Valley are facing ongoing harassment by the Israeli occupation authorities. The Israeli state is gearing up towards a full annexation of this fertile area on the West Bank’s eastern flank.

Rashed Khudairy from JVS told us:

Two months ago [in May] the Israelis removed the signs mentioning the names of our villages and communities in the north of the Jordan Valley, in the villages of Bardala, Kurdala and Ein Al Beida.

The signs [which had originally been put up by the Israeli occupation] said that the villages were Area B [i.e. designated as temporarily under joint Palestinian / Israeli control according to the Oslo agreements of the 1990s] and it was not allowed for Israeli citizens to enter. Already they removed them, that means that they have already started the annexation of the Jordan Valley.

Israel is attempting its biggest land grab for decades. In January, US president Donald Trump gave US approval to Israel’s plans to annex the Jordan Valley, part of the occupied West Bank. Israeli leaders have wanted to claim the Valley for Israel since it was illegally occupied by military force in 1967.

The Jordan Valley is home to 65,000 Palestinians. Since the occupation in 1967, almost 50 illegal Israeli colonies have been established across the Valley, housing 13,000 colonists.

The Israeli state also plans to extend Israeli law to, or in other words annex, all of its illegal colonies in the West Bank. Israel’s colonies, known as settlements, are illegal under international law.

The earliest date that annexation could take place was 1 July. However Israeli prime minister Benjamin Netanyahu is stalling, apparently waiting for further US approval. Meanwhile, Palestinians in the Jordan Valley are facing intensified harassment against their communities. During May and June, Israeli forces demolished Palestinian shops and water pipes and confiscated agricultural equipment from farmers, as well as destroying a Palestinian home.

JVS is calling for international solidarity. According to Khudairy: