From the UK to Kurdistan, we must all rise up against femicide - The Canary 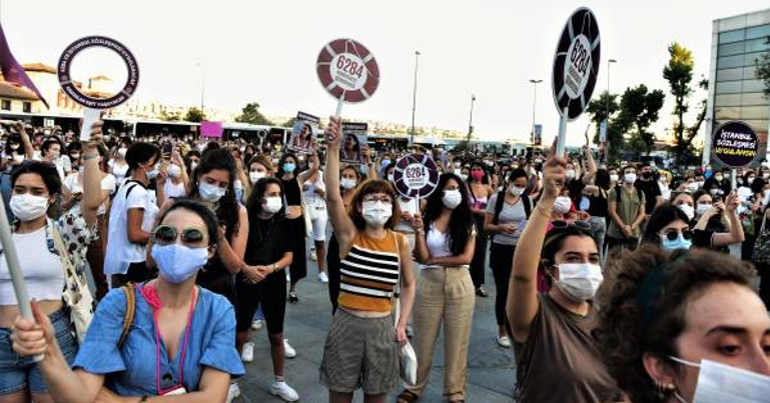 Content warning: This article contains reports of domestic abuse and violence against women and girls which some readers may find disturbing.

On 21 July, 27-year-old Pınar Gültekin’s body was found in woods in Muğla, south-west Turkey. She had been strangled, and her body was stuffed in a barrel, which was then burned and filled with concrete. Her ex-partner confessed to her murder. Women nationwide took to the streets to protest increasing femicides in Turkey.

Figures released by We Will End Femicide Platform show that at least 474 women were murdered by men in Turkey in 2019. At least 134 were murdered by their husbands, and at least 292 were killed in their own homes.

We Will End Femicide Platform publishes the names of all the women murdered by men in Turkey. There are so many names that they don’t fit onto a large computer screen.

Over 3,000 women have been murdered by men since the AKP came into power

Kurdish politician Ayşe Acar Başaran argues that the murder of women in Turkey is a result of the governing Justice and Development Party (AKP) and its misogynist policies. She said:

For each murder of a woman, we declare again that it is a result of the AKP policy. In June alone, 27 women were murdered, another 23 women died in suspicious ways. Since the AKP has come to power, over 3,000 women have been murdered. This is a femicide.

In January, a so-called “marry-your-rapist” bill was introduced in Turkey, meaning that men who rape women can avoid punishment by marrying their victims.

And in 2014, Turkish president Recep Tayyip Erdoğan publicly spoke at a women’s conference in Istanbul and stated that women were not equal to men. He said:

You cannot put women and men on an equal footing. It is against nature.

There have been a number cases of women and girls being murdered or attacked by soldiers or police in Bakur (the Kurdish region of Turkey). Firat News Agency reported on the rape and attempted rape of teenage girls by “non-commissioned officers of the Turkish army”.

It is becoming apparent almost every day that this is a method of special warfare of the governing coalition of AKP and MHP.

The Canary has previously reported on Rojbîn Çetin, who was brutally attacked by the police and police dogs. And earlier this year, 21-year-old Gülistan Doku went missing in Dersim. As of 27 July, she has been missing for 205 days. Kurdish women’s organisation Jin News told The Canary:

Bakur has one of the strongest women’s movements in the world. But it is severely repressed by the state. Women’s organisations are shut down, and women activists and journalists are regularly targeted and imprisoned. Organising under severe state repression is far from easy.

But femicide is far from just a Turkish problem

Murders and attacks on women are far from just a Turkish problem. In the UK, the Femicide Census counted that, in 2018, 149 women were killed by 147 men. 94% of these femicides were committed by a man known to the victim, while 61% of victims were killed by their current partner.

As in Turkey, there has been a rise in the number of reports of domestic abuse against women in the UK during the coronavirus (Covid-19) pandemic.

There is a hidden crisis across the globe that is killing women in their masses. It’s not coronavirus, it’s domestic violence.

As we entered 2020 the number of women murdered every week by a partner or ex-partner in the UK rose to 3. We know that on top of this 3 women a week kill themselves to escape abuse. For women needing to self isolate who are going through domestic violence, it’s a double whammy. Domestic violence perpetrators use many tactics to control and isolate victims from support mechanisms. And now, around the globe, coronavirus is being used as another tool.

All around the world, there’s been a massive increase in the number of reported cases of domestic violence during lockdown. And back in April, the United Nations predicted that:

if strict lockdowns continue for a year, there will be an additional 61 million [global] cases of domestic abuse above what would have already been expected to occur.

The legislation currently lacks support for migrant women – who face insurmountable barriers to escaping domestic abuse and are routinely denied their rights to safety and support.

Only 5.8% of refuge vacancies in England are accessible to a woman with no recourse to public funds due to her immigration status…

Elizabeth Jiménez-Yáñez of the Step Up Migrant Women Campaign said:

Migrant women face multiple barriers when fleeing domestic abuse. They are often unable to get vital support they need due to their immigration status. Four in five are turned away from refuge accommodation, and many are too scared to go to the police for fear they will be reported to the Home Office for immigration enforcement. Despite the powerful evidence presented to the bill committee by survivors and frontline organisations, the bill continues to fail migrant women.

As attacks by men on women increase worldwide, it is vital that women globally make strong connections and stand together to struggle against patriarchy and misogyny. We can’t rely on male-dominated governments to do it for us.