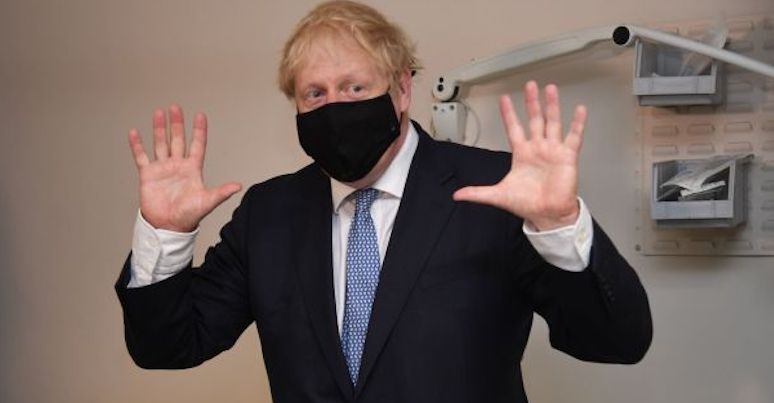 The UK has the highest coronavirus (Covid-19) death toll in Europe. At the time of writing, over 45,000 people have lost their lives. From late lockdown to lack of PPE, inadequate testing and a litany of other errors, the government’s response to the crisis has already killed too many people. Boris Johnson has been prime minister for just one year. Now, after blaming care homes for coronavirus chaos, he’s shifting the blame onto yet more ordinary people. The latest Tory drive linking obesity to coronavirus deaths hits peak hypocrisy. And it’s utterly spiteful.

On 25 July, Johnson admitted to Sky News that “there are things we get wrong”. He also said: “You’ve got to learn from your mistakes as fast as possible and that’s what we’re doing.” On the same day, the latest government initiative linked coronavirus risks and deaths with obesity. On 27 July, Johnson went all-out, launching the government’s Better Health Strategy.

The government’s plans to tackle obesity include:

There’s no doubt that obesity is a problem. The government notes:

Almost two-thirds (63%) of adults in England are overweight or living with obesity – and 1 in 3 children leave primary school overweight or obese, with obesity-related illnesses costing the NHS £6 billion a year.

But the government makes no mention of the links between obesity and poverty. And Johnson added a further sting, saying:

if you can get your weight down a bit… and protect your health, you’ll also be protecting the NHS.

In other words, the latest smoke and mirrors Tory initiative slams yet more blame on the UK public for a drastically underfunded NHS. And that’s just the tip of the iceberg.

“You couldn’t make this sh*t up”

From 3 to 31 August, the government-funded Eat Out to Help Out scheme gives people a 50% discount at restaurants. Participating outlets include fast-food chains. Yet the links between fast food and obesity have been well established. The Left Bible suggested on Twitter that you “couldn’t make this sh*t up”:

Next Monday: Offer half priced meals at Pizza Hut, Burger King and McDonald’s.

You couldn’t make this sh*t up. https://t.co/OG9KZRxsKQ

And let’s not forget that too many families can’t afford to eat out. The coronavirus crisis has impacted the poorest families the hardest. According to the Trussell Trust:

Recent work by the Social Metrics Commission shows that the largest employment impacts from the current crisis have been felt by those already in the deepest levels of poverty. Food banks have seen this first hand. Across the Trussell Trust network there has been a dramatic rise in the numbers of people pushed to food banks during this crisis – including an 89% rise in food bank use in April compared to the same time last year, and a shocking 107% rise in parcels for children.

Johnson also ignored the devastating links between poverty and obesity.

In 2019, The Canary reported that a Commons select committee report condemned the Conservative government’s failure to “recognise and respond to the issues of hunger, malnutrition and obesity in the UK”. Pointing to rising levels of food poverty – particularly for children – it made a damning recommendation: to appoint a minister for hunger to deal with the spiralling crisis of poverty in the UK.

The Environmental Audit Committee (EAC) slammed the UK’s “significant and growing” levels of food insecurity. This is defined as “limited access to food… due to lack of money or other resources”. It also found the UK has the one of the worst levels of food insecurity in Europe, especially for children. One in five children in the UK (19%) goes hungry.

Food poverty creates two devastating outcomes: “malnutrition and obesity”. Too many people can only afford the “very cheapest foods, which are often nutrient-poor but calorie-rich”.

There’s absolutely no mention of this in the latest government policy.

Tories keep briefing their journo pals that they’ve a childhood obesity strategy. Here is one I’ve prepared for them

Another part of the new government initiative means “GPs will be encouraged to prescribe cycling as a way for patients to lose weight”. But again, this fails to take into account the dangers of cycling in the UK without proper investment. And how do people without a bike afford one as we head into mass unemployment from coronavirus? “Redundancy notices,” as Unite general secretary Len McCluskey said, “are already flying around like confetti”.

Prescribe cycling. You what? What if you can't afford a bike, do they prescribe that too? What if you live in a hilly area, or one with poor cycle lanes or if you have bad knees? Stupid idea.

Johnson and the Tories’ disgusting shift of even more blame onto ordinary people doesn’t hide their mishandling of this crisis. Enough is enough.