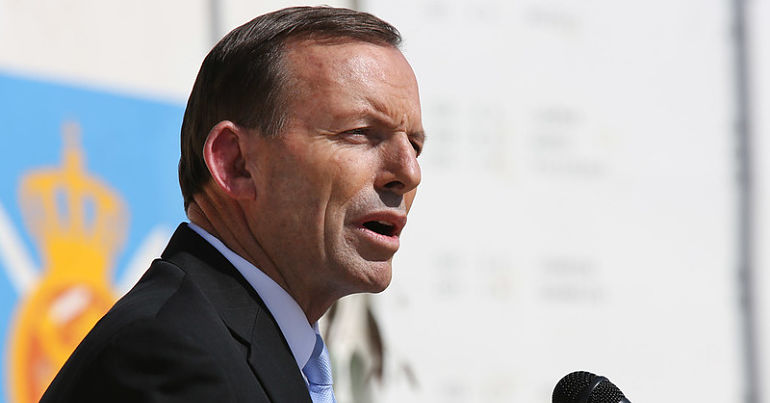 Former Australian prime minister Tony Abbott is tipped to either job-share the post of UK board of trade president with Liz Truss or be an adviser. He would have special responsibility for developing post-Brexit trade deals.

Abbott has been variously criticised for being a misogynist, a climate change denier, and a homophobe. As with other Australian prime ministers, his treatment of asylum-seekers went way beyond what was legally or morally acceptable. One scandal in particular, little known outside of Australian circles, concerned how under his watch ‘people smugglers’ were allegedly bribed with thousands of dollars to turn back their asylum-seeker passengers and return them to Indonesia.

To say that Australia’s management of asylum-seekers trying to enter Australia by sea is disastrous is an understatement. Up to the end of 2013, there were 689 confirmed with another 871 probable cases of refugees who lost their lives in their journey to Australian waters. In December 2011, in one incident alone, 103 confirmed and an estimated 98 probable people died after their boat sank while Indonesian and Australian authorities argued for two days over who should organise a rescue.

In May 2015, a boat, the Andika, carrying 65 refugees from Indonesia to New Zealand was hijacked by the Australian Navy – HMAS Wollongong – and an Australian Customs ship. The boat was towed to Greenhill Island (Australia) and Ashmore Reef (also Australia). The Australian navy then forced the passengers and their crew into two boats and ordered them to return to Indonesia. Controversially, the crew was allegedly paid to follow this order by Australian government officials. The money was subsequently displayed in a photo and that and other photos of the money were published in the media.

One of the asylum-seekers from Bangladesh gave an interview to a New Zealand radio station, explaining how the financial transaction took place. Another asylum-seeker from Sri Lanka backed up this testimony. Yohanis Humiang, the captain of the boat carrying the asylum-seekers, claimed that the Australian official who paid the money – $6,000 in total – was called ‘Agus’. A letter to the New Zealand authorities by the refugees provided further details of the hijacking and the alleged bribery.

The two boats that were provided by the Australian official to the Indonesian crew and their passengers barely made it back to safe land. After the Jasmine ran out of fuel, the asylum-seekers and crew transferred to the Kanak, which then became stuck on a reef off Landu island, West Rote.

A report by The Age described what happened next:

While most of the asylum seekers had put on life jackets and were swimming ashore, village chief Semuel Messak says 10 people, mostly women and children, were still stranded on board the Kanak. One woman was breast feeding.

When all of the asylum seekers had been evacuated in small boats, they gathered at Mr Semuel’s home.

The whole village provided clothes, with Mr Semuel donating 18 sarongs and his wife cooked them noodles, fish and rice.

The push-back policy is already bad enough. And now if this incident is confirmed this would be a new law in the way this issue is being handled. The question would then arise whether this constitutes an authority collaborating and abetting with people smugglers to re-traffic the people.

However, when Abbott was later asked about the alleged bribery incident during prime minister’s questions, he did not deny the allegation but responded:

We adhere to Australian law and we stop the boats. That is what we do.

We will do whatever is necessary, within the law and in accordance with our values as a decent and humane society, to stop the boats and to ensure that they stay stopped.

Not only is what this Government has done legal, it is moral, it is absolutely moral because the most moral thing to do is to stop the boats and save the lives.

But this statement is questionable.

The Kaldor Centre for International Refugee Law stated unequivocally that:

Under international law, Australia has no right to intercept and turn back boats on the high seas (seas not part of any country’s jurisdiction) without the consent of the country in which the boat is registered. While Australia is permitted to ‘exercise the control necessary’ to prevent infringement of its immigration laws within its waters, that right is limited by Australia’s obligations under international refugee and human rights law.

Breitbart asserts that the UK government is considering adopting push-back practices similar to those introduced by Abbott in Australia. Given his history on immigration control, should Abbott get the board of trade top post it’s not unfeasible that the Johnson government may want to exploit his expertise in this regard. However, the Australian immigration control system contravenes numerous international laws and protocols and if the UK followed its example, it too would be in contravention.

On hearing that Abbott was tipped for the trade appointment, UK shadow international trade secretary Emily Thornberry referred to his flawed character, commenting:

On a personal level, I am disgusted that Boris Johnson thinks this offensive, leering, cantankerous, climate change-denying, Trump-worshipping misogynist is the right person to represent our country overseas.

He was ousted by his own colleagues after two years in power, and kicked out of Australian politics by his own constituents just last year. They are the people who know him best, and they wanted rid of him – yet here we are, hiring him to negotiate our trade deals around the world. If it wasn’t so downright humiliating, it would be almost hilarious.

Abbott was famously criticised by then Australian prime minister Julia Gillard for being a misogynist:

Abbott is also no stranger to gaffes and putting him in charge of Brexit trade negotiations would be disastrous – or, as Australian high commissioner to the UK Mike Rann so eloquently put it:

Britain asking Tony Abbott to run its trade negotiations would be about as credible as Australia asking Gavin Williamson to take charge of its education system.

To put it bluntly, Abbott is a joke. But a very dangerous joke.