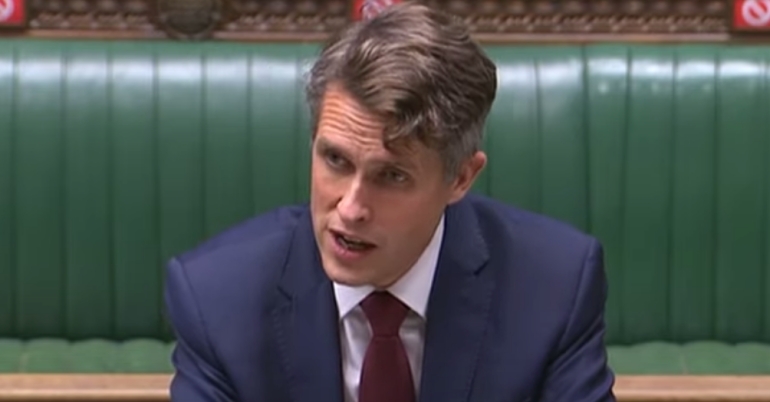 The fallout over the A-Level chaos continues, despite the government’s U-turn back in August. Because the chair of Ofqual has now deflected some of the responsibility directly to the Tory education secretary – who had previously blamed Ofqual itself. But the shifting of responsibility does nothing to instill confidence for those preparing for potential exams in summer 2021.

The A-Level’s fiasco rumbles on

The Canary has extensively reported on the controversy surrounding this year’s A-Level and GCSE results. After Ofqual’s algorithm lowered almost 40% of student’s teacher-predicted A-Level grades, there was public outcry. So, education secretary Gavin Williamson had to climb-down and abandon the algorithm – reverting back to teacher-predicted grades. He then applied the same method of evaluation to GCSEs.

Yet Williamson still kept his job, despite protests calling for his resignation. He went further back in August, blaming Ofqual for the chaos. Before his U-turn, the Guardian reported that Williamson said:

it became apparent to me, with evidence that Ofqual… and external experts had provided, that there were real concerns about what… [grades] a large number of students were getting… and whether that was a proper and fair reflection of their efforts

We… consistently asked a large number of challenging questions about the system. Its robustness and its fairness. We’d been constantly reassured about that.

On 25 August, Ofqual’s chief executive Sally Collier quit. And now, the chair of the regulator Roger Taylor has fired shots at the government.

In a pointed statement that forms part of Ofqual’s evidence to the Education Select Committee, Taylor took aim at Williamson and the Department for Education (DfE). Within a broad narrative on the background to the A-Level chaos, Taylor said:

Understandably, there is now a desire to attribute blame. The decision to use a system of statistical standardised teacher assessments was taken by the Secretary of State and issued as a direction to Ofqual. Ofqual could have rejected this, but we decided that this was in the best interests of students, so that they could progress to their next stage of education, training or work.

The implementation of that approach was entirely down to Ofqual. However, given the exceptional nature of this year, we worked in a much more collaborative way than we would in a normal year, sharing detailed information with partners.

We kept the Department for Education fully informed about the work we were doing and the approach we intended to take to qualifications, the risks and impact on results as they emerged. However, we are ultimately responsible for the decisions that fall to us as the regulator.

The blame lies with us collectively – all of us who failed to design a mechanism for awarding grades that was acceptable to the public and met the Secretary of State’s policy intent of ensuring grades were awarded in a way consistent with the previous year.

In other words, Ofqual believes that the Tory government and the DfE should be taking as much of the rap for the fiasco as it should. Then, giving evidence directly to the Education Select Committee, Taylor went further.

Schools Week reported that on Wednesday 2 September, Taylor told the committee that:

Ofqual’s ‘initial advice’ to Williamson was that the ‘best way to handle this [lockdown] was to try and hold exams in a socially distanced manner, that our second option was to delay exams but the third option if neither of these were acceptable would be to have to try and look at some form of calculated grade’.

But it was Williamson who then ‘subsequently took the decision and announced without further consultation with Ofqual that exams were to be cancelled and a system of calculated grades were to be implemented’.

As Schools Week noted, Taylor’s evidence contradicts Williamson’s claims. So, who’s to blame? Ofqual, the government, or civil servants at the DfE? Probably all of them. But ultimately, the issues of this year’s education grades is also potentially one of ideology.

A case of eugenics

As The Canary previously reported, the A-Level situation and the algorithm’s downgrading of poorest students the most appears to have come from Boris Johnson’s aide Dominic Cummings. He explicitly wrote on his blog that civil servants and MPs had ‘corrupted’ A-Levels, essentially making them too easy. He also said the drive to give as many pupils as possible “access” to be able to take them had ‘devalued‘ the whole process. Moreover, Cummings believes that “cognitive ability” is hereditary; in other words, a form of eugenics. He also has links to Ofqual, which has been looking into the role of AI in marking exams. And as The Canary previously wrote:

If Cummings did have a hand in (or influence over) the Ofqual algorithm, it would fit in well with the government’s drive to promote further education for the ‘less-intelligent’ (i.e. ‘poorest’), and universities for the ‘brightest’ (‘richest’) students.

So, it seems the initial algorithm decision may have come, at least in part, from an ideological position. But what will happen for exam students in 2021?

Sky News reported on 2 September that Ofqual was “weeks away” from deciding if next year’s exams should go ahead. It is reportedly considering online exams as a possibility. Taylor told the Education Select Committee that any exams would be “fair” and “comparative”. But already the cracks in the Ofqual/DfE relationship are starting to show – with Williamson ‘supporting’ delaying the 2021 exams. But as Sky News said:

On Tuesday… [Williamson]… told MPs the government is determined that exams will go ahead in 2021, adding they were working with the sector to ensure ‘this is done as smoothly as possible’.

‘Smooth’ is the last word that could possibly be used to describe the current situation in the English education system. And the continuing war of words between Ofqual and the government shows that ultimately, student’s best interests are repeatedly falling to the bottom of the pile.