Armed raids, strip searches and torture: this is life for Turkey's students - Canary 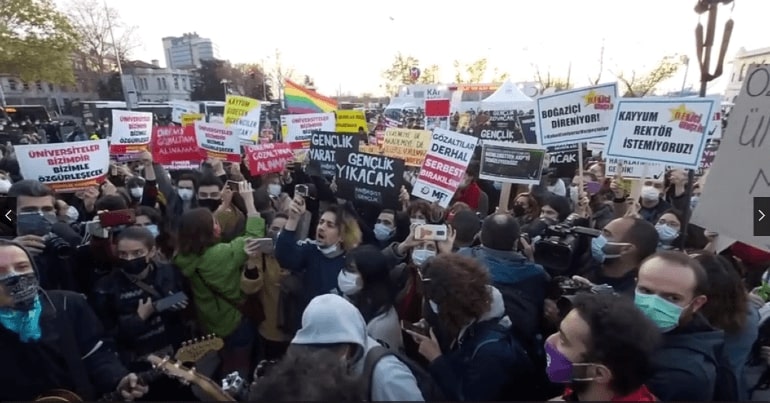 Turkey’s disgusting human rights record has come under the spotlight yet again as students continue to protest in Istanbul and other major Turkish cities. Since early January, thousands of students, academics and graduates of Istanbul’s Boğaziçi university have been protesting the appointment of Melih Bulu as rector. Appointed by president Recep Tayyip Erdoğan, Bulu is an ally of the president, and is the first rector to have been appointed outside the university since 1980. For the people of Turkey, it is a stark reminder of Erdoğan’s ever-tightening control of state institutions, the media and education.

Hundreds have been arrested since the protests began. Latest arrests include that of Beyza Buldağ, a former Boğaziçi student, after police raided her home in Izmir. Buldağ allegedly administered the Twitter account of Boğaziçi Solidarity. According to Bianet, she is accused of “insulting the President”, “provoking the public to enmity, hatred and hostility” and “provoking to commit crimes”.

Others have faced armed raids, strip searches and torture at the hands of the Turkish state.

The LGBTQI+ community has been particularly targeted by the state in a torrent of hate-speech. According to LGBTQI rights organisation ILGA Europe:

Over the past week in Turkey, both government and government-supported media have called LGBTI+ people a “disgrace”, “dirty” and “perverts”, which has prompted a wave of hate-speech on social media.

President Recep Tayyip Erdoğan held video conferences on Monday 1 February and Wednesday 3 February denouncing LGBT people and praising his supporters saying: “We will carry our young people to the future, not as the LGBT youth, but as the youth that existed in our nation’s glorious past.”

On February 2, Justice Minister and the Interior Minister Süleyman Soylu called LGBT people “perverts” on Twitter. The social media platform has since flagged the tweet as violating its rules against “hateful conduct”.

Thousands of writers and academics have released statements against the government

147 of Turkey’s top writers, including Turkey’s top-selling author Orhan Pamuk, have issued a statement against the government’s actions. They say:

The hate speech by top public officials, labeling of students as terrorists, unlawful detentions and police violence is new evidence proving that our country has long been far from a constitutional state of law.

We stand with the resistance at Boğaziçi University. We won’t bow down to persecution and oppression. We won’t look down.

The government’s response has been brutal. Erdoğan has called the students ‘terrorists’ and LGBTI+ students in particular have been singled out for harassment. The police have conducted home raids with guns drawn, detained and strip searched protestors, and engaged in torture.

We the undersigned condemn these actions and stand in solidarity with the students and faculty of Boğaziçi University.

As The Canary has previously reported, thousands of people in Turkey have already been imprisoned for insulting its dictatorial president over the years. Anyone even slightly critical of the man and his ruling party risks spending time in jail. Terrorism-related charges are consistently misused by the UK’s ally. The state is known as “the world’s biggest jailer of professional journalists”.

Those arrested and charged at Boğaziçi protests are likely to join the tens of thousands of political prisoners, including activists, musicians, academics, human rights defenders, writers, and politicians. We must all make sure that we stand in solidarity with those opposing the Turkish government’s reign of terror against its own population.