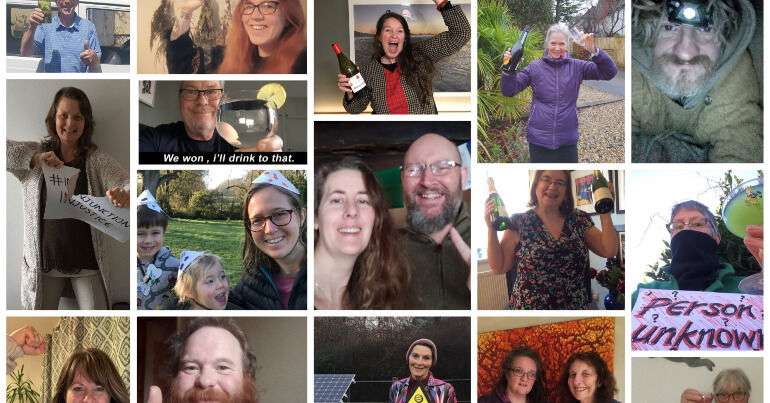 Campaigners are celebrating a massive victory as the company UK Oil & Gas (UKOG) announced that it is scaling back its interim injunction against protesters. The injunction has been in place since 2018, and has severely hampered the right to protest against UKOG and its drilling for extreme oil. Campaigners have argued that the injunction has been “the most expansive so far sought by the industry”.

Five women, under the umbrella of the Weald Action Group (WAG), had been expecting to continue their legal challenge against the injunction in the High Court on 9 February. But on 4 February, UKOG scaled the injunction back radically, including removing a ban on slow-walking. Slow-walking is where protesters walk very slowly in front of trucks that are trying to make their way onto oil and gas company sites. It has been a much-used tactic for many years.

Back in 2018, UKOG executive Stephen Sanderson released a statement after the injunction was issued, titled “mob rule and anarchy has no place in modern Britain”. He argued that:

obstruction of the highway (including by slow-walking, lock­‐ons and lorry surfing), and obstructing or interfering with our suppliers, does not constitute peaceful protest.

It now appears that Sanderson and his team have changed their minds, as slow-walking has been removed from the injunction by the company.

The injunction had been issued against “persons unknown” and named people. According to Drill or Drop:

The original application, which contained more than 900 pages of exhibits and 500 videos, was against “persons unknown” …

In March 2020, UKOG sought to add more than 100 individuals to the injunction but failed to identify most of them by name. It was argued that few, if any, had been involved in unlawful activities. In April 2020, the company tried unsuccessfully to bar the five women from bringing their legal challenge.

Michael Oswald of Bhatt Murphy Solicitors, is acting for the five women. He told The Canary:

The injunction originally sought by UKOG against ‘persons unknown’ was incredibly wide in its scope and draconian in its impact on peaceful protest. Our clients’ long battle to fight the injunction has forced UKOG to scale it back radically.  It is a tremendous victory for our clients, for the wider environmental movement, and the right to protest.

After the announcement, Natasha Doane, of the Leith Hill campaign in Surrey, said:

Wide-reaching injunctions aimed at persons unknown have had their day.

Companies cannot buy their way through the courts. The freedom to express your views is a right that shapes democracy and enables current pressing issues to be addressed.

The hearing is expected to go ahead on Tuesday so that changes to the injunction order can be made. And a five-day trial is scheduled for February 2022 to decide whether UKOG’s interim injunction should be made final. UKOG was contacted for a comment, but The Canary had received no reply at the time of publishing.

Featured image via Drill of Drop