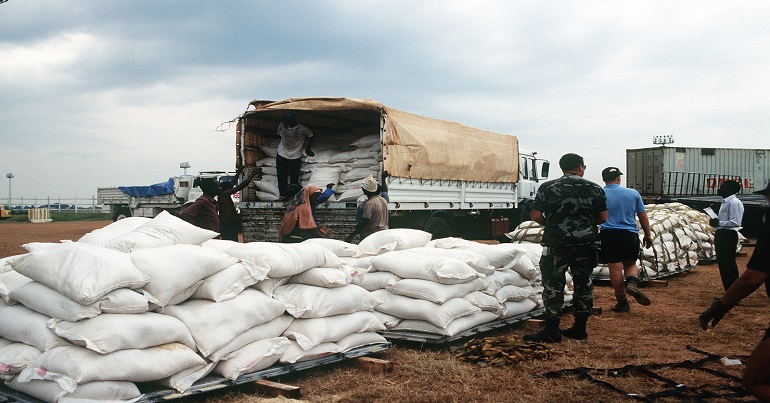 Global hunger could get even worse because of the war in Ukraine. The Stockholm International Peace Research Institute (SIPRI) has published a report on the global impacts of the war. It says the war adds to the existing problem of global food poverty. However, this is more than avoidable given that enough food is already produced globally for everyone.

SIPRI said the problem of hunger due to the Russian invasion is very real. This has resulted in a Ukrainian government ban on food exports:

Amid fears of food shortages and in order to alleviate hunger, the Ukrainian Government has banned exports of locally produced food commodities, including wheat, barley and sunflower oil. As a result, Ukraine will probably become a net consumer of these.

The report said the war was likely to impact planting and agriculture. This would have knock on effects inside and outside the country, which is known as one of the breadbaskets of Europe due to its role in food production:

Further, should the planting season take place despite the conflict, it is likely that production will be destined to cover domestic needs first. The country could even shift to being a net recipient of food aid—meaning dependent on food aid to ensure food security—as the war wages on.

Reduced production and an export ban have global implications. SIPRI said that the World Food Programme (WFP) bought half of its grain from Ukraine prior to the Russian invasion. These factors could worsen food poverty and hunger globally:

The bans on exports and the increased needs in Ukraine have serious implications for humanitarian food supplies. Before the war, the global humanitarian system relied on the country as one of the main suppliers of food. WFP used to buy half its wheat from Ukraine for food assistance, including in-kind distributions.

The international research body also warned of a spike in food prices in recent years and added that aid agencies had reported their buying power had been “weakened” as monthly costs soared:

In 2020, agencies reported weakened purchasing power due to higher food prices, as part of the economic fallout from the Covid-19 pandemic. WFP, for example, reported higher monthly costs of $42 million in 2020. The conflict in Ukraine is now putting further pressure on global food prices. Today, WFP estimates it costs $71 million more every month to pursue its work globally.

It said there was a risk that less popular causes in the Global South could be hit hard by the new focus on Ukraine. Needless to say, all of the places affected by an underfunding of aid and humanitarian are outside Europe:

The situation is particularly concerning in 13 underfunded humanitarian operations, including in the Democratic Republic of the Congo, Honduras, Lebanon, Madagascar, Myanmar and Syria. Prior to the Ukraine crisis, underfunding had already resulted in food rations being cut in South Sudan and Yemen.

And while it is understandable that Ukraine was a key focus for humanitarian aid, SIPRI warned that other countries must not be forgotten:

Russia’s invasion has sparked a devastating humanitarian crisis in Ukraine, which will have implications for other crises across the globe. This in turn will impact global hunger. More civilians are likely to go to bed on an empty stomach, both in Ukraine and beyond.

It said nobody should be in this situation in a world where there was enough food for everyone. And they’re right. This new danger is an indictment not just of this particular war, but of an entire global capitalist system which prices millions of people out of meeting their basic human needs.