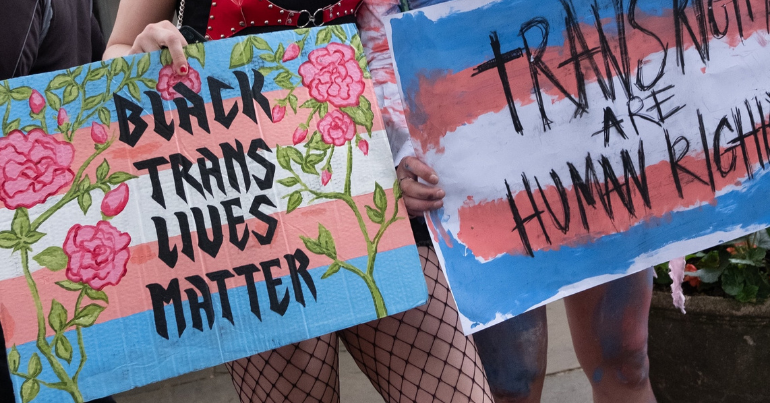 Over the past week the government has continued its ongoing transphobia with yet another decision which has been criticised by campaigners. This comes amongst a backdrop of TERFs (trans-exclusionary radical feminists) who have bolstered formal inequalities for trans people with a concerted campaign of harassment and abuse. The government’s abandonment of trans people is a threat to the safety of all trans people.

Social media users took to Twitter to express their hurt and anger at the decision:

This is unacceptable. Admitting that conversion therapy is harmful but keeping it around for a select marginalized group is downright fucking evil.

Ban ALL conversion therapy. It’s torture, and it has no place in a civilized world. https://t.co/bYiSWQS8qi

Conversion therapy doesn't work. It just makes trans kids traumatized, tough, and angry. If you keep trying to bring it back you're just gonna end up with a bunch more like me.

Only a handful of days later, over 100 organisations withdrew from the Safe To Be Me conference in protest at this decision. The event was going to be the first of its kind, a global LGBT conference marking 50 years of London Pride.

A number of organisations, including the Terence Higgins Trust, National AIDS Trust, and LGBT Foundation released a joint statement:

The Government’s decision to exclude trans people from the ban on conversion therapy is completely unacceptable. Trans rights are human rights – progress without or at the expense of trans people is not progress. We stand together and will not be divided.

As HIV charities and community groups we stand in solidarity with Stonewall and the whole LGBT+ sector and will not be supporting or attending the upcoming global LGBT+ ‘Safe To Be Me’ conference unless the Government reverts to their promise of a trans-inclusive ban.

It is apparent that trans people have once again been sacrificed for political gain.

Conversion therapy is happening to LGBTQ+ people in the UK right now, and every day without a ban is a day where LGBTQ+ people remain at risk of lifelong harm. Trans people are amongst the highest risk groups in our community – the latest research from Galop shows that 11% of trans people have been subjected to conversion practices by their own families.

The fact that over 100 organisations withdrew in protest at the government’s shameful decision should send a message. That message, however, may well be ignored.

Also earlier this week, the Equality and Human Rights Commission (EHRC) published guidance which says that trans people can be excluded from single-sex services if “justifiable and proportionate“.These single-sex services can include toilets, changing rooms, and housing shelters. The Guardian report that:

the justification could be for reasons of privacy, decency, to prevent trauma or to ensure health and safety.

Following the upsetting guidance on single-sex spaces released by EHRC, a group of us have produced an open letter. Anybody who agrees and would like to sign, please do so here – https://t.co/J9MHTP1EGC Please retweet after signing. pic.twitter.com/gQIiCIOYjW

The Trans Legal Project, a network of free legal advice, posted on social media about the guidance:

Our statement re the @EHRC guidance on separate & single-sex spaces. Discriminatory, bigoted, contradicts its own Statutory Guidance & unlikely to survive a Judicial Review. We urge organisations to continue to rely on Statutory Guidance in this area. https://t.co/Yhm2OlbIuu

The argument around trans people and toilets, in particular, has become a focal point for TERFs. The EHRC are fanning the flames of a moral panic which harms the daily lives of trans people.

The EHRC’s independence has come under question, and this is no surprise given that the commission is sponsored by the Government Equalities Office. Indeed, Stonewall UK and the Good Law Project have brought a submission to the Global Alliance of National Human Rights Institutions. If successful, they could block the EHRC from being able to make representations to the United Nations Human Rights Council.

The EHRC is subject to a level of oversight and micro-management from the department which is just not consistent with being a UN Human Rights Institution.

The government’s possible involvement with the EHRC is destabilising to the already weakened stance of the EHRC. Cara English, Head of Public Engagement at Gendered Intelligence, told Dazed Digital:

For the past few years, it’s been increasingly obvious that there isn’t going to be anything positive towards trans communities coming out of the EHRC…we don’t have faith in them as the watchdog of human rights for the UK. They are simply failing in their duties towards trans and non-binary communities.

Johnson’s U-turn on conversion therapy is yet another concession to right-wing talking points. Johnson is backtracking on promises to abolish conversion therapy. Not only that, he is using trans communities for political point scoring.

Keir Starmer, in a characteristic fence-sitting exercise, has in the past said that “trans women are women” according to legal statutes. This restates legal realities, but does little to address the social and cultural harm done to trans people through a lack of solidarity. Starmer also struggled to answer questions about trans rights during an LBC interview, betraying Labour’s inability (or unwillingness) to support trans rights decisively.

Trans activists, campaigners, and communities have repeatedly had to explain and account for their humanity. Trans rights are human rights. However, this past week has been a crushing demonstration of just why the UK is known as TERF island. Excluding trans people from formal equality is a disgusting display from the government. Leaving campaigners and activists to mobilise against this is all too familiar with this political leadership.

Featured image via Ehimetalor Akhere Unuabona/Unsplash – free to use under Unsplash License, cropped to 770×403