We need to talk about Britain's transphobia problem - Canary 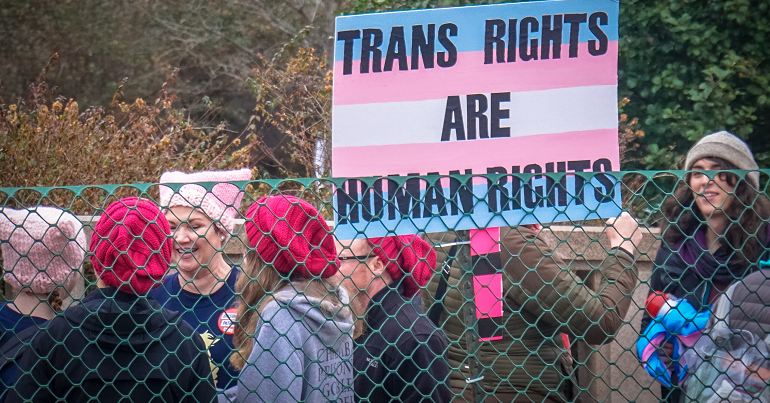 We have a transphobia problem, and it’s getting worse. Not just because of the frequency with which it’s happening, or the form it’s taking, but because of the legitimacy it’s being given by large scale bodies, including – most recently – by the BBC.

As a trans person, I’ve experienced hate speech and threats of violence and I’ve feared for my safety. I have lived with the stares from strangers and the scary indecision of which public toilet I’m going to get the least harassment in. And as a trans man, I have it so much easier than my trans sisters who are so much more likely to experience violence and abuse.

But even with all this that we face daily, I can see my community being scared and exhausted from a different kind of abuse. It’s one that’s much harder to pinpoint and has a much wider reach – the insidious propaganda that’s creating a hateful, false narrative about us.

Twisted words and a tapestry of lies

As someone who’s experienced emotional abuse, it feels like being gaslit but on a national scale. Just like being manipulated by someone in your life, you end up not knowing which way is up. It’s painful and disorientating when someone you think you can trust – in this case mainstream media – is telling you seemingly reasonable things that make it hard to speak your own truth without having the words twisted.

The truthfulness of what’s being reported aside, the intent behind it is to build an untrue narrative. To make a story that uses small truths told in untrue quantities to make a large, terrifying lie in which you are the villain to their victim.

Eventually the tapestry they weave is so complete and thorough that it hangs in between the truth and anyone seeking it. Any attempt at finding the real shape of things is obstructed by false narratives. This is doubly hard when the conversations are happening in bitesize tweets and sensational stories where nuance is lost and the most extreme views get re-shared.

This is what’s happening in the UK today with waves of transphobia coming from a small but vocal group of people. The truth is that trans people exist. We have existed forever and we are just as wonderful and diverse as the cisgender population. But what this group of people would have you believe is that trans people are a new phenomenon and that we are inherently predatory, perverted, and looking to recruit your innocent children.

And so feeding into this narrative the BBC has published an article about trans women being rapists. Using a poll conducted by a known anti-trans organisation with a small sample of respondents from their echo-chamber of social media followers, the publicly-funded and supposedly neutral BBC has presented a flimsy argument that trans women are a threat to cisgender lesbians.

I grew up with the BBC being seen as a trusted news source, so for me it feels like a friend siding with your abuser and giving legitimacy to their abuse. The truth feels even harder to explain when hateful sentiment is dressed as a reasonable narrative; when the framing of the hatred is that of false concern for another marginalised group.

I once heard that being in a relationship with a narcissist is like being arrested – everything you say can be used against you. That’s what it feels like here. A subtle conversation about gender and sexuality has been taken and twisted to be a narrative that trans people are trying to force people to have sex with them. And this is one of many things that have been twisted, manipulated, and grotesquely misshapen.

We assume that we are always moving forward and becoming more progressive, but that just isn’t the case at the moment especially when it comes to anti-trans sentiment. The language used is so reminiscent of how tabloids wrote about gay people in the 80s that once you see the similarity it’s almost laughable we’d be going through this again so soon, but here we are.

A growing movement of hate

What’s so scary about this new transphobic trend is just how much it’s growing. We, as trans people, have been fighting tooth and nail for basic rights. And with every tiny movement forward our efforts are met with such fury that we dared step out of line that we are pushed even further back. Each time it happens, this vocal group of transphobes gets new recruits who have heard their battle cry of how we’re harming women and children. And with the sensational stories they create, they get new places to publish their hateful narrative.

While the transphobes get more powerful and gain bigger platforms, my community is getting more and more exhausted. This isn’t just an online moral panic for us; this is our everyday, and it’s everywhere we turn. Despite carefully curating my social media to be as positive as possible, their hatred still seeps through. I have anxiety at the thought of the comments section and of course I avoid the tabloids, but now I daren’t even read the BBC News.