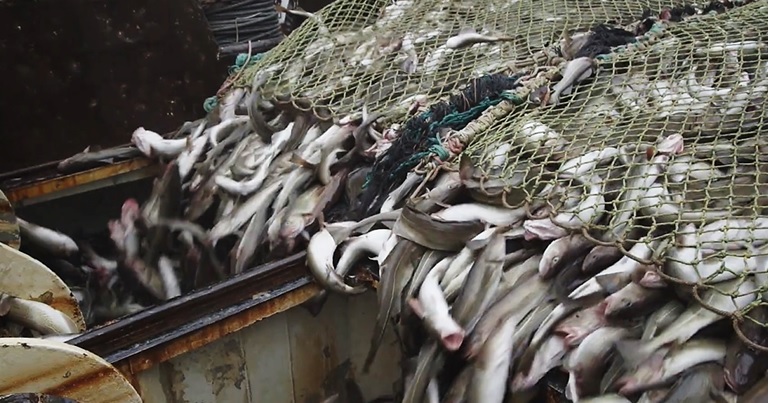 Thailand announced a moratorium on new licences for vessels that engage in one of the most destructive fishing practices on 1 July. The country revealed that it will permanently ban new licences for bottom trawlers at an event at the UN Ocean Conference.

Bottom trawling amounts for 26% of all marine fishing around the world, according to a 2021 report by Fauna & Flora International and others. It is widely recognised as being disastrous for wildlife and many small-scale fishers.

Nonetheless, as marine conservation organisation Blue Ventures‘ head of advocacy Annie Tourette told The Canary at the conference, Thailand’s move isn’t common on the world stage presently. She asserted that it is:

not something we are seeing in many other countries, including in the EU and the UK.

Tourette said it would be welcome if other countries followed Thailand’s lead. The UK’s Department for Environment, Food and Rural Affairs (DEFRA), however, declined to comment on whether it would do so.

Damaging on many levels

Bottom trawling is characterised by the use of fishing gear that maintains contact with the ocean floor. It typically involves dragging large weighted nets across the seabed. Some trawling, namely pelagic trawling, consists of towing nets through the water without such seabed contact.

Bottom trawling is problematic on multiple levels. It can lead to the over-exploitation of the target species, catch many other species unintentionally, and ruin habitats for sealife. Among other issues, it may also contribute to the climate crisis by disturbing carbon stored in the seabed.

As Alhafiz Atsari – head of international relations for the Indonesian Traditional Fisherfolks Union (KNTI) – has said, the practice is generally problematic for people who rely on small-scale fishing too. Atsari explained that in Indonesia:

Small-scale fishers are forced to compete with industrial giants in our own waters. The giants are fishing vessels using destructive fishing gear, such as bottom trawlers. They take up so much space, are greedy and reckless, and can destroy everything in the ocean.

Thailand’s director-general of the Department of Fisheries, Chalermchai Suwannarak, announced the moratorium at a conference event that officials from Belize and Madagascar also attended. According to the Transform Bottom Trawling Coalition (TBTC), which Blue Ventures is a part of, the discussion centred around excluding industrial fishing from coastal areas. TBTC said that such exclusions, along with measures that provide preferential access to coastal communities, can help to restore ecosystems and fish communities (often referred to as stocks). They can also assist in securing livelihoods and food for local people.

Madagascar and Belize have brought in policies to exclude industrial fishing and offer preferential access to small-scale fishers, respectively, in certain areas. Thailand, meanwhile, introduced a Fisheries Act in 2015. Along with other provisions, such as measures to tackle Illegal, Unreported, and Unregulated (IUU) fishing, the act restricted the access of industrial vessels to an inshore zone.

Reports by TBTC member the Environmental Justice Foundation (EJF) ahead of Thailand’s Fisheries Act illustrated why it was essential. As the organisation wrote in 2015, the country’s heavily industrialised fleet, widespread destructive practices, and the “international demand for cheap seafood” had seen severe environmental degradation in the major sealife trader’s waters.

As part of its reforms, Thailand froze new licences on industrial vessels from 2016. Its announcement on the moratorium essentially makes this freeze permanent for bottom trawlers, Blue Ventures said. At the event, Suwannarak highlighted that the government is also implementing schemes to buy back and force the decommissioning of fishing vessels in order to reduce the fishing capacity of the domestic fleet.

[Thailand is] setting a bold example that should be applauded and followed throughout the region and internationally.

The UK, where fisheries policy is in large part the responsibility of its devolved governments, is a country that needs to follow Thailand’s example. Marine conservation organisation Oceana released an audit in early 2021 that showed 6 out of 10 fish communities, meaning populations of species, were over-exploited or in a critical state in the UK. Oceana called on the government to prioritise sustainability in its fishing policies and set “catch limits in line with science”. Conservative MPs roundly rejected this notion in 2020, voting against an amendment to the Fisheries Bill – a precursor to a new Fisheries Act – that would have aligned fishing quotas with scientific advice.

Our country is also awash with bottom trawlers. A TBTC report in 2021 asserted that they are responsible for at least half of the UK’s total catches. As the Guardian reported in May, bottom trawling or dredging took place in over 90% of its marine protected areas (MPAs) in 2021, which are meant to provide better protections for marine species. Some changes are on the horizon, however. These include an upcoming ban on trawling and dredging in four MPAs, and promises of higher protections in areas of Scotland and potentially England.

Moreover, as the University of Aveiro’s Cristina Pita told The Canary, the definition used by the UK for small-scale fisheries (SSF) includes vessels capable of trawling. Pita, who is also a principle researcher with the International Institute for Environment and Development, said that a vessel “must be under 10 metres in length and operating in inshore waters” to be considered small-scale in the UK. But she explained that:

some vessels under 10 metres use towed gear, meaning small trawlers can operate in inshore waters. The ingenuity of small boat builders in designing so-called ‘super under 10s’ allows some of these vessels to have catching and storage capacity, even for pots, well in excess of what is expected of SSF.

The Canary contacted DEFRA to ask if Thailand’s example is one it is considering following. It declined to comment, instead pointing to the announcements it made during the conference. These include confirming where it would direct funds from an existing commitment made in 2021, namely the Blue Planet Fund. DEFRA revealed that it will invest £154m and £100m from this fund in the restoration of coastal habitats and marine protection, respectively, in developing countries. The Blue Planet Fund is derived from the overseas aid budget.

The government also joined the US and Canada in launching the IUU Fishing Action Alliance. The alliance has pledged to tackle IUU fishing through the implementation of existing international agreements, effective monitoring, and data transparency.

However, pointed commitments to reduce bottom trawling in the UK’s own waters were missing from these announcements. Scotland has also taken insufficient action so far. A campaign called Our Seas is calling on the devolved government to introduce similar measures to Thailand, Belize, and Madagascar.

If the UK is serious about protecting the marine environment, as it claims, it must reduce the destructive fishing practices happening in its waters. Thailand’s example offers a blueprint for how to do so, if only our country would follow its lead.