The Met is in special measures. But more failings are coming to light - Canary 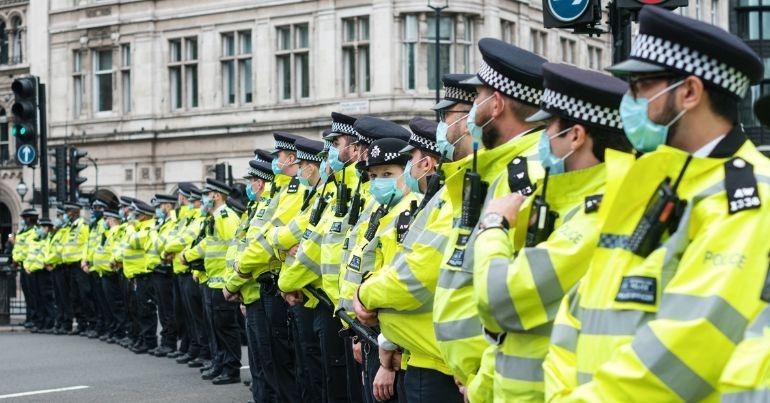 Since then, even more police failings have come to light. Public trust in the force is at an all-time low – and with good reason. Now is the time to reconsider the role of the police in our society, and develop new ways of dealing with social issues.

Special measures comes as no surprise

Following an HMIC inspection, the watchdog placed the Met – the UK’s largest police force – in special measures. This means that the force is failing to meet the acceptable standards required of a public service.

According to the Guardian, the unpublished report cites 14 recent “significant failings” in addition to a series of scandals. This comes as no surprise, following several years of disgraceful, immoral, and illegal conduct from Met police officers.

In March 2021, we saw the rape and murder of Sarah Everard by serving police officer Wayne Couzens, followed by violent policing of her vigil. This horrific case shone a light on the institutionalised misogyny at large within the force.

Institutionalised misogynoir – ingrained prejudice against Black women and girls – came to the fore when Met police officers shared selfies with the dead bodies of murdered sisters Bibaa Henry and Nicole Smallman. This foul treatment came after a bungled investigation in which the sisters’ family was left to discover the remains of their loved ones.

Meanwhile, stories of the Met’s shameful strip searches of children such as Child Q and Olivia highlight the harm and violence that officers routinely inflict on children and young people. In particular, cases such as these raised concerns about the adultification of Black children.

Reflecting the force’s institutional homophobia, the 2021 inquests into the murders of four young gay and bisexual men by Stephen Port identified several “missed opportunities” to prevent these deaths.

And in 2022, a barrage of racist, misogynistic, and homophobic messages shared by officers at Charing Cross police station came to light.

These ghastly cases are just the tip of the iceberg. Since HMIC placed the Met in special measures, further serious failings have come to light.
On 5 July, the public inquiry into the death of Jermaine Baker concluded that a Met police officer “lawfully killed” the unarmed man. The fact that a police officer can legally shoot and kill an unarmed man at close range shows just how woefully low the bar is for policing standards. And yet the force has failed to meet them.
In spite of this disappointing conclusion, the Baker inquiry noted a barrage of damning failures that took place from the outset and throughout the police operation.
Baker is one of at least 1,823 people who have died in police custody or following police contact in England and Wales since 1990. Black and racially minoritised people are overrepresented in these heartbreaking figures.
On 6 July, the Independent Office for Police Conduct (IOPC) revealed the force’s “unacceptable” handling of 19-year-old Richard Okorogheye’s disappearance. This was one of a number of clumsily and incompetently handled recent missing people cases.

On 29 June, footage emerged revealing that Met police officers lied about the “fighting stance” of a Black social worker they tasered. That same day, the Good Law Project issued legal proceedings against the force over its Partygate investigation. And on 30 June, the College of Policing published a report revealing that officers accused of domestic abuse are escaping accountability and still on duty in law enforcement. The list goes on.

Defund the police, refund our communities

According to the Met itself, the force’s purpose is to “to serve and protect the people of London by providing a professional police service”. We don’t need any further evidence that the police do quite the opposite.

It’s undeniable that the Met is institutionally corrupt, racist, misogynistic, and violent. HMIC’s findings present an opportunity to reconsider the role of police in our society, and to move towards systems and strategies that actually work to make the world a safer place.

This begins with investment in and the empowerment of communities, not the police. We need strategies that actively prevent harm from occurring, and foster accountability when it does.

We can get the ball rolling by intervening in every police interaction we come across. In order to reduce the detrimental impact of the police, we must all learn how to intervene in police stops. The next step is joining a local copwatching group. The police can’t keep us or our communities safe. We can.