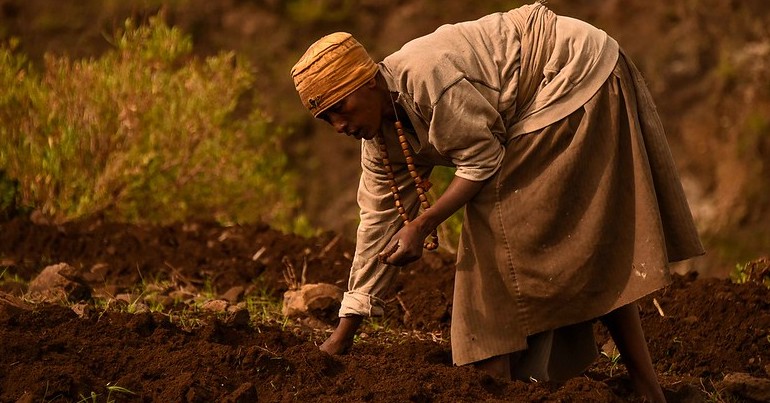 Millions of African people have demanded that the UK and others cease funding an agricultural initiative on the continent. They say that the Alliance for a Green Revolution in Africa (AGRA) locks farmers into dependence on corporations and environmentally destructive practices. Instead, farmers, along with faith leaders and other civil society organisations (CSOs), have urged funders to redirect financing to initiatives that are ecologically sound and offer self-sufficiency for people.

AGRA’s name echoes that of an earlier ‘Green Revolution‘. Led mainly by the US, it imposed industrial agricultural practices on various parts of the world in the second half of the 20th Century.

The Alliance for Food Sovereignty in Africa (AFSA) says that AGRA’s ‘revolution’ is similar. AFSA is a vast network of civil society groups from across Africa that advocates for food sovereignty and agroecological farming, meaning agricultural practices that harness and protect nature. In all, AFSA represents around 200 million people.

Like its earlier namesake, AGRA’s ‘revolution’ reduces farmers’ autonomy, making them reliant on artificial inputs such as fertilizers and pesticides supplied by corporations, the civil society alliance says. Moreover, these agrochemicals ravage the natural world – from waterways to insects – and play a central role in the world’s environmental crises.

So AFSA and other organisations have reiterated a call they made last year for defunding of the ‘revolution’. The call came just ahead of AGRA’s annual forum, the African Green Revolution Forum (AGRF). It took place between 5-9 September in Rwanda.

We are calling upon all the funders to please stop funding AGRA. Redirect your funding towards systems that enable people to have their dignity, for all creation to have an equal chance to live, where there are no chemicals in our water, in our ground, and in our food.

Founded in 2016, AGRA’s stated aim is to ‘transform’ the agricultural sector in Africa through increased productivity, income, and food security. The Bill and Melinda Gates Foundation is a key financial backer, along with organisations like the Rockefeller Foundation. The UK, US and German governments provide funding too.

As Timothy A. Wise wrote in Mongabay, however, donor-funded research shows that AGRA is failing to achieve its aims in terms of income and food security. Wise is a senior research fellow at Tufts University’s Global Development and Environment Institute. His own research in 2020 found that the number of severely undernourished people had increased by 31% since AGRA’s founding. This increase was in the thirteen countries the ‘revolution’ focuses on.

Speaking at the press conference, Leonida Odongo from the social justice-focused organisation Haki Nawiri Afrika insisted that African people have the “expertise” to solve the continent’s agricultural issues, not AGRA. They are “best-placed” to provide the necessary “Afro-centric” solutions, she said.

These solutions should involve sustainable agroecological practices, AFSA says. It asserts that ecologically-friendly bio-fertilizers and bio-pesticides can be made from local, low-cost materials, for example, to replace their chemical counterparts.

The Canary contacted the Foreign, Commonwealth and Development Office for comment on the UK’s funding of AGRA. It did not respond by the time of publication.

Odongo also pointed out that AGRA focuses on seeds, alongside chemical inputs. From the earlier Green Revolution onwards, corporations have secured a monopoly on seed production. Championed by industrialised nations, they have patented varieties of existing seeds, such as genetically modified organism (GMO) varieties. Four agri-giants currently control over 50% of seeds globally, according to DW.

Linked to this seed privatisation, Odongo says that African countries are increasingly introducing legislation containing “punitive clauses” that outlaw “age-old traditions” of farmers saving and exchanging seeds. In other words, farmers’ use of indigenous seeds is being restricted by law, forcing them into dependence on corporations’ hybrid varieties instead.

Its chemical fertilizer and hybrid seed heavy agenda has snatched the power out of the hands of the small scale farmers whilst simultaneously degrading their soils.

He further suggested that the initiative hasn’t helped women, who he described as “the anchors of the agricultural sector in Africa”. The donor-funded research, carried out by consultancy firm Mathematica, found that most of those who did benefit from it were male and wealthier to start with. Phiri also pointed out that the chemical fertilizer industry and patent holders of hybrid seeds are key beneficiaries of AGRA. He concluded by saying:

Despite this opposition to AGRA among civil society, institutions and policymakers appear to have largely embraced it.

One such institution is the African Development Bank (ADB). In the press conference, Oakland Institute executive director Anuradha Mittal accused the financial institution of currently using:

Dr Akinwumi A Adesina is the current head of the ADB. He used to work for AGRA funder the Rockefeller Foundation. He also worked for AGRA itself from 2008-2011, before becoming Nigeria’s agriculture minister.

In this atmosphere, civil society is struggling to be heard. AFSA’s Kirubel Tadele said that donors have answered AFSA’s call for defunding with silence. Meanwhile, Nnimmo Bassey, director of Nigeria’s Health of Mother Earth Foundation, told The Canary:

AGRA has studiously avoided responding to the calls from CSOs. They continue to push in with the failed system simply because they have deep pockets behind the endeavour. Efforts at direct communication with AGRA has proven to be like talking to persons who play deaf but have no knowledge of sign language.

At its recent annual event, AGRA attempted to rebrand its initiative. The Seattle Times reported that it will drop any mention of a ‘green revolution’. From now on, only its acronym will remain. During the summit, AGRA president Agnes Kalibata, a former agriculture minister in Rwanda, insisted that the organisation has had some “huge successes”.

Its critics appear to disagree. The Oakland Institute’s Mittal said:

the new AGRA strategy unveiled at the forum shows that the institution is still centered on technological fixes and the promotion of agricultural inputs.

She added that AGRA’s promoters and supporters “continue to cater to the interests of agrochemical corporations”, while ignoring the civil society call for change “towards truly sustainable food production on the continent”.

In the age of climate breakdown, industrial giants are increasingly churning out what they call ‘climate-smart’ products, such as seeds that are resilient to drought. But continuing with the industrial model, which allows these giants to keep their stranglehold on the food system, isn’t climate-smart, it’s “climate-stupid agriculture”, Odongo said. And millions of African people want absolutely no part of it.