Greece is prosecuting people for trying to help refugees 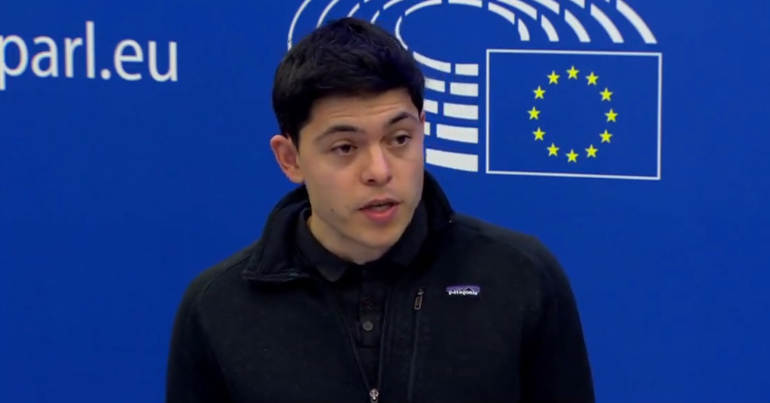 On 10 January 2023, rescuers and first responders will stand trial on the Greek island of Lesbos. Their crime? Saving the lives of refugees and migrants. The case is the first of its kind in Europe, where humanitarian help is officially criminalised by a state.

28-year-old Seán Binder, 27-year-old Sara Mardini, and 42-year-old Nassos Karakitsos will face trial along with 21 others. They worked as rescuers and first responders with the non-governmental organization (NGO) Emergency Center International between 2016 and 2018, supporting migrants and refugees who were making perilous journeys to Lesbos. They are accused of espionage, people smuggling, money laundering, membership of a criminal organisation, and a litany of other charges. If found guilty, they could face 25 years in prison. On 10 January the defendants will face the charges that are classified as misdemeanor crimes, while the felony charges are still pending investigation.

Among the spurious evidence against them is the fact that the defendants sent encrypted messages via WhatsApp, which is also used by two billion other users worldwide.

Binder, Mardini and Karakitsos already spent more than 100 days each in pre-trial detention in a high-security prison after they were arrested in 2018. They were released on bail after international pressure and campaigning from NGOs and activists. They were originally due to stand trial in November 2021. Mardini was refused entry back into Greece, and the trial would have gone on in her absence. The case was then adjourned until 10 January.

Binder grew up in West Kerry, Ireland. He is a trained maritime search and rescuer who went to volunteer in Lesbos after finishing a master’s degree in International Relations at the London School of Economics. When he was released on bail in 2018, he said:

We are not heroes – neither are we criminals.

If I can be criminalised for mostly doing little more than handing out bottles of water and smiles, so can anyone.

Mardini is from Damascus, Syria, and now lives in Germany. In August 2015, she fled armed conflict and attempted the crossing from Turkey to Lesbos in search of safety. Sara and her younger sister, Yusra, who were both competitive swimmers in Syria, made news headlines when they saved 18 fellow passengers from drowning after their boat’s engine failed. They jumped into the sea and kept the flimsy dinghy on course, guiding it to the shore in the dark.

Karakitsos is from Athens, Greece. In 2016, he volunteered on the shoreline of Lesbos to help rescue refugees in distress, becoming the field director and search and rescue team lead of the Emergency Response Centre International (ERCI).

The court case is an attempt by the Greek state, along with the EU, to scare volunteers and NGO workers from actively saving lives in the Mediterranean. Indeed, it has worked. Binder said:

This trial is not about me, and Sara, or even the 22 other defendants. This trial is about the Greek authorities trying to crush compassion and prevent people from seeking safety.

Free Humanitarians pointed out that:

Since their arrest, rescue efforts have diminished, today there are no civilian efforts at all.

The criminalisation of refugees and migrants, along with the criminalisation of those who want to act in solidarity with them, has created a hostile, racist continent. Instead of spending money on saving refugees, the EU continues to strengthen fortress Europe, paying agencies like Frontex to prevent people from arriving, essentially leaving them to drown.

Indeed, in 2022, an average of six people drowned every day in the Mediterranean sea. Sea Watch, an organisation which rescues those in distress at sea, pointed out that:

The International Organization for Migration counts a total of at least 2,005 people who died on the move in 2022.

In solidarity with refugees and those on trial for saving them

It doesn’t matter if you’re on the right or the left, we should be able to agree that nobody should be abandoned to die.

European countries refuse to face the fact that it is their foreign policies that have forced so many people to leave their countries. They will never take responsibility for the fact that weapons made in companies in the UK and other European countries are responsible for the forced migration of millions of people. Instead, the governments of mainland Europe, as well as the British government, continue to demonise our comrades seeking a safe life, scapegoating them for our failing capitalist system with its collapsing economies, rising inflation, and crumbling health systems.

We must all stand in solidarity with those on trial – saving lives should never be a crime.