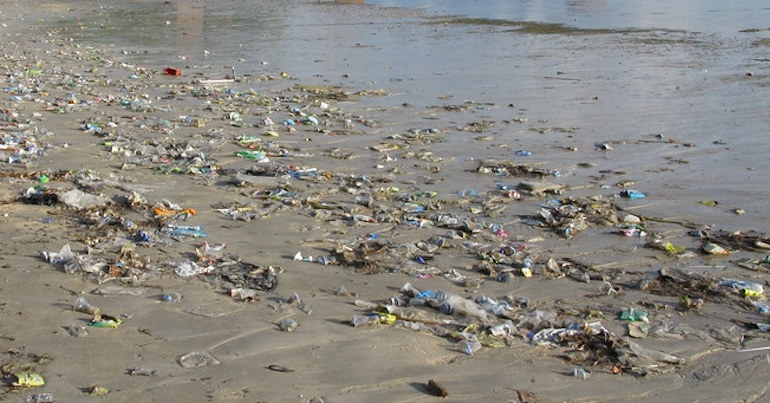 The legal action comes as measures aimed at limiting plastic pollution ramp up elsewhere too.

In their case against the company, the groups argue that Danone isn’t taking sufficient action to reduce its plastic footprint. They have filed the case with the French equivalent of the UK’s High Court, the Tribunal Judiciaire de Paris.

Under France’s ‘duty of vigilance’ law, companies above a certain size must work to identify and prevent human rights violations and environmental damage linked to their operations. However, the organisations behind the legal action say that Danone – which produces bottled water alongside dairy, plant-based milk alternatives, and other foodstuffs – is “burying its head in the sand” over plastics.

In a summary of its vigilance plan published in the company’s 2021 financial report, Danone highlighted some environmental risks in its supply chains. These include deforestation and water risks but not plastics.

Elsewhere in its report, the company highlighted its aim to half its use of virgin plastic, and to use 100% recycled plastic in Europe specifically by 2025. The company is also “exploring ‘beyond plastic’ options”, it claimed.

However, a 2022 report from the organisation Break Free From Plastic indicated that Danone is among the top-10 plastic polluters in the world. In light of the scale of its pollution, the groups bringing the legal action argue that Danone’s commitments don’t amount to a meaningful plan. ClientEarth plastics lawyer Rosa Pritchard said the company:

continues to rely on single-use plastic packaging in the hopes that recycling will miraculously deal with the flood of plastics it puts on the market. But recycling is a limited solution as only 9% of plastics ever made have been recycled. It’s unrealistic for food giants like Danone to pretend recycling is the silver bullet.

It’s 2023 and high time Danone started implementing proper solutions such as refill and reuse beyond a few pilots to give consumers real access to a sustainable model. It needs to deplastify now.

The organisations issued legal warnings to Danone in September 2022, providing it with an opportunity to strengthen its vigilance plan. They argue that the company responded without adequately addressing their demands.

The groups are demanding that Danone map the impacts of its plastics use and assess its plastic footprint. Based on this analysis, the company should create a ‘deplastification’ plan, they say.

Cracking down on plastic

Plastics are implicated in multiple environmental crises. When they enter the natural environment on land and at sea, they can be deeply damaging to marine and terrestrial life. They contribute to both the biodiversity and ocean crises. Moreover, plastics are made from fossil fuels and generate greenhouse gases throughout their life cycles. As such, their excessive production and use is contributing to the climate crisis too.

Through the UN, countries began work towards creating a global plastics treaty in November 2022. As Inger Andersen – executive director of the UN Environment Programme – indicated at the time, countries are meant to come up with a treaty that transforms “the entire life cycle of plastic”.

Individual countries have also taken some steps recently to limit plastic pollution. France has, for example, legislated to ban single-use packaging in restaurants. Fast food establishments over a certain size now have to utilise reusable plates, cutlery and cups instead. Incoming environmental regulations in Spain, meanwhile, will see tobacco companies pay for the clean-up costs associated with cigarette butts. Trillions of cigarette ends enter the environment each year, and are primarily made of plastic and contain many toxic chemicals. As Surfers Against Sewage has highlighted, the plastic filters:

can take years to degrade and, even as they do, they break down into tiny pieces of plastic, called microplastics, which are hazardous in waterways and oceans.

The UK government has also confirmed that it is banning certain single-use plastic items, such as plates and cutlery, following a consultation on the matter. As the Guardian reported, environment secretary Thérèse Coffey said:

This new ban will have a huge impact to stop the pollution of billions of pieces of plastic and help to protect the natural environment for future generations.

Greenpeace welcomed the move but argued that the government needs to do much more. The organisation’s political campaigner, Megan Randles, commented:

we’re dealing with a plastic flood, and this is like reaching for a mop instead of turning off the tap.

In their call for plastic reduction, Greenpeace echoes the demands of the groups taking legal action against Danone. Clearly, environmental groups believe that limiting the excessive production of plastic, which fuels its over-consumption, is key to tackling the scourge of plastic pollution.