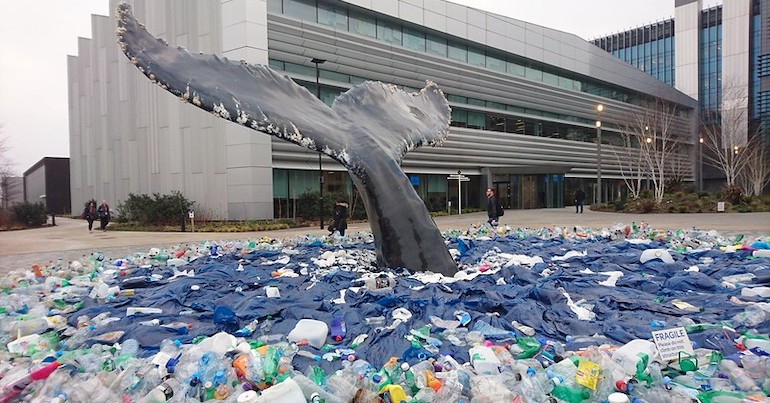 Representatives of almost 200 nations began a meeting in Uruguay on 28 November to address the scourge of plastic pollution. At the five day-long talks, delegates in the seaside city of Punta Del Este are charting a path to the first global plastics treaty.

Plastics are implicated in the multiple environmental crises the world faces. They are proving deeply damaging to marine and terrestrial life, meaning they are contributing to both the biodiversity and ocean crises. Moreover, plastics are made from fossil fuels and generate greenhouse gases throughout their life cycles. So as Inger Andersen, Executive Director of the Nairobi-based United Nations Environment Programme (UNEP), said at the start of the Uruguay talks:

A plastic crisis is also a climate crisis. Plastic has a heavy carbon footprint and a heavy chemical footprint.

As Agence France-Presse (AFP) reported, Andersen pointed out that, at present, “the world has a significant addiction to plastic”. She’s not wrong. By some estimates, a garbage truck’s worth of plastic is dumped into the sea every minute. The amount of plastic entering the oceans is forecast to triple by 2040. Moreover, microplastics have been found in human blood, lung, spleen, kidney, and fetal tissue.

A meaningful plastics treaty would, in essence, wean the world off this addiction as much as is feasibly possible – and ensure any remaining use of it isn’t damaging to the environment and its lifeforms.

Everything up for grabs in plastics treaty

The Uruguay meeting comes after the parties at the UN Environment Assembly in Nairobi in March agreed to create an intergovernmental committee to negotiate and finalise a legally binding plastics treaty by 2024. The decision was seen as the biggest environmental advance since the Paris Agreement to curb global warming was signed in 2015.

Experts believe it is only an international, legally binding agreement that could truly begin to halt one of the worst environmental scourges on the planet – if there is enough political will. The Uruguay meeting is only a first step in the negotiations process. Another four global meetings are planned to carry the process forward. Technical matters, such as how to structure the two years of talks, or even what should be included in the treaty, are up for discussion. So are issues like who will be involved in the negotiations and therefore wield influence over them.

Andersen said the delegates would work together to “transform the entire life cycle of plastic,” from the production of polymers, to the way brands and retailers use plastic, to the waste that emerges. She said:

Influence over plastics treaty will determine its success

Influence over the negotiations is a critical matter. As the Environmental Investigation Agency’s (EIA) ocean campaigner Jacob Kean-Hammerson recently wrote, the plastics treaty process isn’t yet “the corporate-captured circus” of the UN climate summits. In light of that, the campaigner laid out his hopes for what the treaty could achieve:

I hope we get to the root cause of the problem and start to phase down plastic production, turning off the tap to allow us to mop the floor. I hope countries and companies will be held to account for the plastics crisis and legally obliged to follow new global rules.

Anderson, UNEP chief appears hopeful. AFP reported that she said “It is ambitious to end plastic pollution, but it is entirely doable”. However, Kean-Hammerson warned that:

Make no mistake – plastics are fossil fuels and are a major growth market for the fossil fuel industry, especially as the long-term future of oil, fossil gas and coal in the energy market diminishes.

We cannot afford vested interests in the room

Corporate interests have, as the EIA campaigner indicated, gained a lot of influence over the UN climate summits. After 636 of the fossil fuel industry’s lobbyists gained access to the most recent of those summits, the nonprofit Global Witness argued that:

We cannot afford fossil fuel companies in the room, greenwashing, delaying and pushing questionable technofixes that allow them to carry on with business as usual.

What – if anything – delegates decide in Uruguay in relation to access for such industries will indicate the treaty’s direction of travel and its potential for meaningful change.