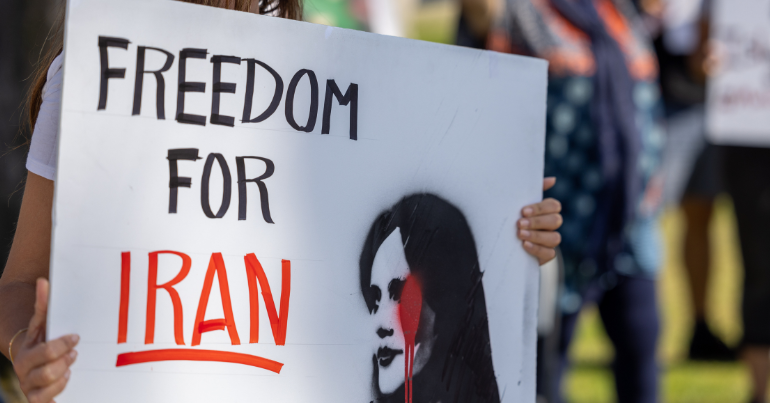 Three Iranian teenagers are among 15 people who could face the death penalty over the killing of a pro-government paramilitary force member, the judiciary said on 30 November. Iran has been rocked by protests since the September 16 death of Jîna Mahsa Amini, a 22-year-old Iranian of Kurdish origin, after her arrest in Tehran for an alleged breach of the country’s dress code for women. Authorities charged a group of 15 people with “corruption on earth” over the death of Ruhollah Ajamian, a member of the Basij paramilitary force, the judiciary’s Mizan Online website reported.

The Basij militia is a volunteer paramilitary force of men and women under the control of the Islamic Revolutionary Guards Corps (IRGC).  Its members are found in schools, universities, state and private institutions, factories, and even among tribes.  Basij forces are widely used to help to maintain law and order and repress dissent, and have frequently been accused of using extreme brutality.

As the Canary previously reported, Norway-based Iran Human Rights said at least 448 people had been “killed by security forces in the ongoing nationwide protests”, in an updated toll issued on 29 November. The group says its toll includes those killed in violence related to the Amini protests and in distinct unrest in the southeastern province of Sistan-Baluchistan, which borders Pakistan and Afghanistan.

Based on the announced charges, such as ‘waging war’ and ‘corruption of earth,’ some of the accused could be sentenced to death. The detainees are being held without having been officially charged or being able to meet with a lawyer, or contact family.

In reality, this is a security process, not a judicial one. The security establishment wants to quickly issue sentences and doesn’t care about legal procedure. The courts are just acting as rubber stamps.

Authorities are heavily policing protests on the streets, as well as those on social media. As Agence France-Presse (AFP) reported, Iranian authorities have arrested the two actors behind a viral video where a group of film and theatre figures stood silently without headscarves in solidarity with the protest movement. Authorities have arrested the actor and director Soheila Golestani, who appeared without her headscarf in the video, and the male director Hamid Pourazari, who also appeared prominently, according to Human Rights Activists News Agency.

The director of DAWN, which was founded by Jamal Khashoggi, shared the video on Twitter:

In the clip, Golestani, wearing black, walks into the shot without a hijab and turns around to reveal her face, looking directly into the camera. Nine other women then join Golestani with the same gesture, as do five men. The Iran Wire website said all those in the video were Iranian actors. It was not clear if they too risk arrest.

Several Iranian actors have made taboo-breaking gestures of removing their headscarves, with are mandatory for women in the Islamic republic. Earlier this month Taraneh Alidoosti, one of Iran’s best-known actors remaining in the country, posted an image of herself on social media without a headscarf: 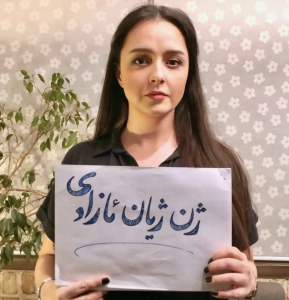 Iran also arrested two prominent actors, Hengameh Ghaziani and Katayoun Riahi, who expressed solidarity with the protest movement and removed their headscarves in public in an apparent act of defiance. Authorities have now released both on bail, reports said.

Iranian cinema figures were under pressure even before the start of the protest movement sparked by Amini’s death. Prize-winning directors Mohammad Rasoulof and Jafar Panahi remain in detention after their arrests earlier this year. Rasoulof was arrested for objecting to the violent response to protestors from the government on social media. Panahi was sentenced to six years in prison for criticising the Iranian government.

The Center for Human Rights in Iran urged action from the international community:

The world must speak out—heads of governments around the world, U.N. officials and experts, and international professional associations of lawyers, journalists, doctors, teachers, athletes, cultural figures and others—should publicly condemn the violent and lawless behavior of the Iranian authorities, and communicate clearly to Islamic Republic officials that meaningful costs will intensify with their continuation.

Featured image by Wikimedia Commons/Brett Morrison via CC 2.0, resized to 770×403